Has the time come for a Brent Planning for People Forum? 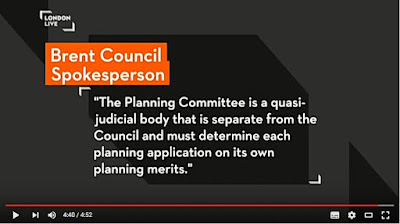 The above statement was made by Brent Council in response to a discussion on the London Live TV channel on  the Lucozade Powerleague proposals for Kingsbury High School.

It has been received with some cynicism by local campaigners who have been at the receiving end of decisions made by the Planning Committee.

Reporting regularly on planning issues from Wembley Matters I have repeatedly seen residents go along to Planning Committee in the belief that their objections to applications will be taken seriously, only to come out having given their 2 minute speech, listened to the often barely audible proceedings, angered that the Committee had then tamely voted in favour of the developer.

Residents are now realising that the time has come to make links with others in the same predicament.

Recently there have been some more independent decisions by the Committee and the chair, Cllr Sarah Marquis, has stuck her neck out but this seems to have earned her the ire  of Muhammed Butt the Council leader.  The latest manifestation of that was his intervention to ensure that proposals from Quintain for the area around Wembley Stadium, in his own Tokyngton ward, were rushed through at two Planning Committees last week.

One of the problems is the Council's policy of 'smoothing the way for developers' promoted by Andy Donald, former Director of Regeneration and Major Projects.

Brent Council is in effect a partner with Quintain in the redevelopment of the Wembley Stadium area through the Wembley Masterplan.  This presents difficulties for planning officers' and councillors' independence.

It was reported to me last week that one councillor had allegedly remarked, 'It's Quintain - we have to vote for it.'*

Last week Brent residents were by-standers as Brent Council, Quintain and the Football Association deployed all their resources and experts on a battle that will impact on residents for decades to come. Our voices were barely heard. When one particularly preposterous claim was made and I couldn't suppress a response, a Quintain suit turned round and told me to be quiet. I replied, 'No I won't - I live here.' The exchange summed up our powerlessness.

The Roe Green Village residents challenging Lucozade have found that their ward councillors offer no support and so have mounted their own public campaign while the rsidents challenging the Wembley twin Towers are appealing to Sadiq Khan, the London Mayor.

It is just not Quintain of course but a whole range of developers and multi-national companies as well as Brent Council itself that we are faced with - what they have in common is that they have the money, resources and time. Residents squeeze their research into spare time in the evenings and weekends and have to go through a rapid self-education process in planning law and procedures.

I think it is time to consider setting up an umbrella group that will bring individuals, residents associations and voluntary organisations concerned with these issues together so that experience and expertise can be shared and proposals made to reform the consultation and decision making processes in Brent Council.

In time the group could perhaps pool resources to get their own professional advice as well as hold a 'People's Panel' to consider particular planning applications.  It would be strictly non-party political.

What do people think?

* This is from a previous posting on changes to the Planning Committee Code of Conduct. The issue of pre-determination is particularly relevant: