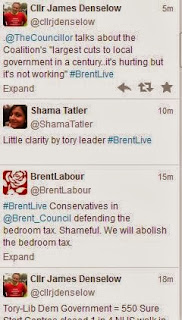 I published a story earlier this week suggesting that critical Twitter comments were not getting posted on Brent Council's Twitter feed during the live webcasting of Monday's Council Meeting. LINK

The feed displayed simultaneously displayed on the Council website beside the webcast appeared to be dominated by council friendly tweets including those from @BrentLabour and Cllr James Denselow.

I also suggested that the Council's 'House Rules' included a catch-all sentence that seems to rule out critical comments about the council itself.


If you’re offensive about the council, or anyone who works for us, or runs the organisation, we will remove your comments. Comments that are likely to bring the council into disrepute will be removed

Since then there have been various suggestions about how this happened including the feed not recognising the hashtag #BrentLive if it was not capitalised. It was pointed out to me that some of my comments did get through to the feed and thus it was clear there was no censorship - but others did not. I put this down to the censorship not being carried out very efficiently but now a Council spokesperson has issued the following statement:


We are very excited to be the first London council to integrate webcasting and Twitter for important meetings. Social media is providing new ways of making local people aware of what their representatives are discussing and enabling them to join in the debate.


More than 300 people watched this successful first Full Council webcast and Twitter feed, more than normally attend council meetings, so this initiative has already made local democracy more open, and we hope more people will watch and comment in future.

Brent did not censor or stop any tweets from going out on www.brent.gov.uk/democracy. We have investigated and this is down to an unexpected technical problem with Twitter itself, a problem other users have reported here https://dev.twitter.com/discussions/11765


We are working to have this fixed for the next Full Council meeting.

The house rules are designed to support discussion of the council and its policies regardless of whether tweets are critical or not. The aim is to stop anyone abusing the Twitter feed by, for example, trolling individuals or bombarding it with tweets unrelated to the debate.

There were some problems with the councillors' microphones which will be fixed for the next Full Council meeting.