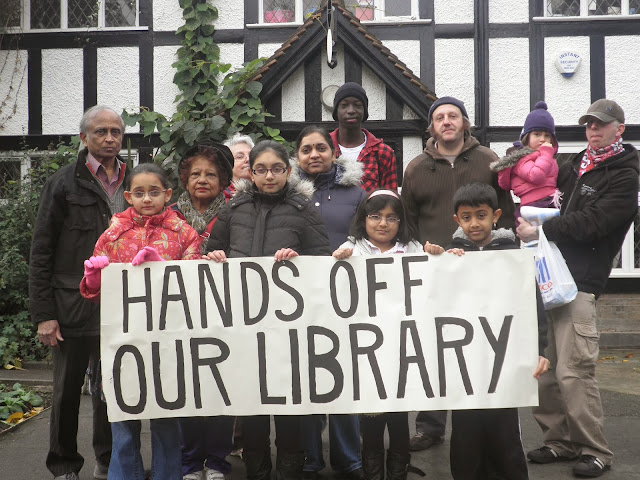 
At Wednesday's (November 13th)  Brent Planning Committee meeting the Planning Officer's recommendation to grant permission for a change of use of the former Barham Park Library building from D1 (Community Use) to B1 (Business Use) was rejected by the committee, by 6 votes to 1 vote, with 3 abstentions.


The committee were not satisfied that there were grounds for over-riding Brent's Core Policy CP23, which states that 'existing community and cultural facilities that support community participation and development will be protected, or their loss mitigated where necessary.' The Planning Officer's recommendation had been based on a Community Facilities Assessment produced by an unidentified Council Officer, which claimed that there was no need or demand for the former library space as community facilities. This was based on the existing room at the Barham Park buildings which is available for short-term hire only being occupied for 11% of the time it was available (although this was at a time when before it was refurbished, and was not being actively "marketed" by Parks Service), and there being other community facilities in the area which could be hired anyway, such as church halls and school buildings.

It was plainly obvious to committee members from evidence given to them by objectors, including Alton Bell of the Sudbury youth charity Pivot Point Foundation and Cllr. Paul Lorber on behalf of the Friends of Barham Park Library, that there was a need and demand for community facilities in the area which required full-time use (not a couple of hours a week) of at least parts of the building. To give all of the space to the arts charity ACAVA to let out as artists studios would deprive local people of those existing community facilities.

Among the points which I had made to the committee was that they clearly should follow CP23, and protect the former library are for community used, and that they had to be seen to apply planning policies consistently, under the terms of their Planning Code of Practice. They had recently refused applications by a private developer involving the former Kensal Rise and Cricklewood libraries, using the protection of community facilities under CP23 as a major reason. Here, the Planning Officer was asking them not to apply CP23, on an application made by Brent Council. Any inconsistency would strengthen the grounds for appeal against their earlier decisions. (As a point of interest, the only person outside of Brent Council who supported the planning application was a Mr A. Gillick - I wonder why?)
Posted by Martin Francis at 11:11:00

Not only was Andrew Gillick the only independent supporter of the Barham application, he was the only person slated to speak at the planning meeting in support. BUT - he didn't show up! Was his absence anything to do with the outing of the St Mary's Mansions address earlier that day as his own? (A simple Land Registry request confirmed Mr Gillick as the leaseholder. Number 51 St Mary's Mansions is currently sublet.)

This address supporting the Barham Library planning application 13/2179 appears to be the same as two on the Kensal Rise Library application 13/2058. The addresses and comments are printed below in precisely the format they appear on the two applications - note the slight (deliberate?) variation.

it's clear the Barham address must also be handed over. So far the council has failed to comment.

''04/10/2013 - St Mary's mansions , London , W2 1sh . Support: This is a good use of redundant space. The library service was re provided in the borough and it is good to see Brent promoting self sufficient artists studios. The case should be decided on planning merits'

21/08/2013 - 51 St Marys Mansions St Marys Terrace W2 1SH . Support: I totally support this application to convert this beautiful building into a private and community space. In this weeks copy of the Brent & Kilburn Times, the developer outlined he was the only person willing to buy the property and put a community space back into it. To retain the integrity of the building from the outside should be of the utmost importance to the community and not allow it to become derelict and a squatters paradise. The building has been sold so it is pointless for FRKL to bicker about the square footage on offer and others to complain about parking. The offer to re-house the library as a gift to the community is a generous one. The current arrangement by the library group is an eye sore on the street.

19/08/2013 - St Marys Mansions London W2 1SH . Support: This development could be a great asset and development for Kensal Rise and ensure this building will be renovated before it falls into disrepair, burns down, falls down and becomes an eyesore. The library service formally supplied in the ground floor of this building has been re provided in Brent and so the creation of this new spacious community hub is intended to add to the community facilities. The old library was in poor repair and there is no possibility that despite community group efforts the whole building would lend itself to 100% library use again for physical and financial reasons. The community hub is in the best part of the building and there are minimal external alterations, the door way being created was originally a doorway I believe. The apartments above and to the side are good use of the building and will give others the chance to live in this great part of London. The management plan for the community space is fair and transparent and should ensure the building gets used day and evening and can be used by everyone not just library users. A real nice use of an attractive building and nice to see a developer creating a space for All the community to use for free.

How could any Planning Officer in Brent recommend changing the use class form Community to Business? It is totally against what the people of Brent want as demonstrated by the Sudbury Town Residents Association neighbourhood plan in the process of being developed. Surely there is a very serious error of judgement here.

Dear Andy,
Here are the Planning Officer's reasons, in his own words, from the key paragraph (16) of his report to Planning Committee on 13 November 2013:
'Whilst the proposal results in a net reduction in the amount of community (Use Class D1) floorspace by 301 square metres, your officers consider that the submitted Community Facilities Assessment demonstrates that sufficient capacity exists within the units that remain within the complex and nearby.'
The Community Facilities Assessment did show that, and the Planning Officer(s) had accepted it at face value - why should they doubt it, when it had been drawn up by a colleague (still unidentified) in Brent's Regeneration Department? However, the evidence before the committee, as set out in my "guest blog" above, showed that the Community Facilities Assessment gave a false and incomplete picture of the local demand for community facilities. On the basis of the true position, it was correct to apply Brent's core policy CP23.
The Planning Officer's recommendation was therefore clearly incorrect, as it relied on a document which was incorrect. I had already pointed this out to the Planning Officer in an online comment at least ten days prior to the committee meeting, but he did not reconsider whether he should continue to rely on the Community Facilities Assessment, and that was an error of judgement. Brent's Planning Committee correctly rejected the planning application for change of use of the former library space from community to business use on the grounds that such a change 'would be harmful to the future provision of flexible community facilities for local residents,' and was 'therefore contrary to policy CP23 of the London Borough of Brent LDF Core Strategy 2010.'
Philip Grant