The Kilburn Times LINK this weekend headlined the news that more than 600 Brent primary school children are without a school place. I recently obtained figures from Brent Council under a Freedom of Information request that sheds a little more light on the situation. This is the snapshot of  vacancies and children out of school on November 8th. Brent Managed and School Managed refers to the administration of admission applications. You can see that there is a slight surplus of school places in Years 3, 5 and 6.

The schools with several Reception vacancies at the time of the snapshot were Ark Franklin Primary Academy (the academy converted former Kensal Rise Primary), Brentfield Primary, Fryent Primary (recently expanded) and St Mary's RC Primary. The position changes rapidly so it is likely that these places will have been filled by now.

The fact that many children attend schools which are not their first choice or the most convenient means that many are on waiting lists for one or more other schools. With the current movement of families due to benefit reforms this produces 'churn' - high mobility as children change schools.

Despite a common National Curriculum across local authority schools this still produces disruption for children as they get used to a new school,  new teacher and new classmates, and is disruption for teachers as they cater for an ever changing class population.

Research indicates that such mobility has an initial impact on standards of achievement of the children who change schools.

The exceptional nature of the place shortage in Reception means that in total there are almost 2,500 on waiting lists in Brent. On the day of the snapshot five schools had more than 100 on the Reception waiting list: Anson 118, Ark 264, Islamia 104, Malorees Infants 102 and Wembley Primary 100.

I have asked for further information on how many of these are pupils on several waiting lists.

Things become much more settled at Year 1 with Barham the longest waiting list at 30, with a more equal distribution across schools, totalling 546. By Year 6 the total is 360.

I requested figures on the number of children out of school by planning area in order to get a picture of the geographical distribution. Brent Council said these figures were not available and instead provided distribution maps which are not exact. The blue figures on the map below indicate groups of children needing a Reception school place. 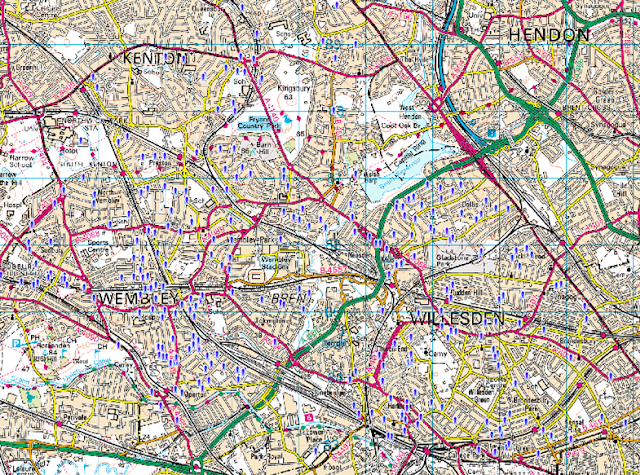 The demand for Reception places reinforces the need for planned construction of new primary schools by local councils rather than reliance on the vagaries of free school providers popping up in areas of need. The Council presently has a statutory duty to provide education for these children without having the powers to do so apart from expanding schools which are already often on crowded sites.

The Government needs to give local authorities back the power to plan and build new schools as well as the finance to do so. Instead they are wasting money of unwanted free school vanity projects.