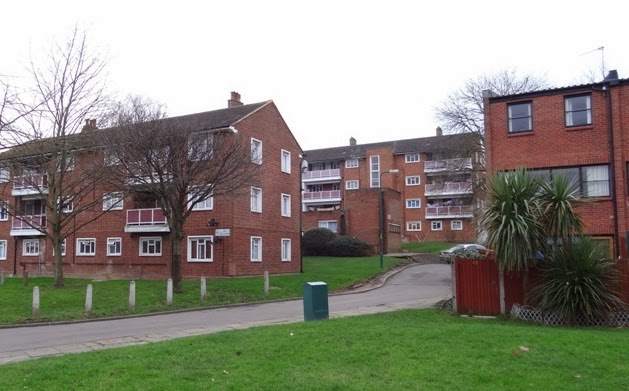 I live on a Brent Housing Partnership estate which has a mixture of flats, maisonettes, terraced houses and town houses. These are occupied by a mixture of 'right to buy' freehold owners (or purchasers from an original right to buy owner), leaseholders, BHP tenants, private tenants and probably some sub-lets.

Two bedroomed flats and houses are privately let for between £800 and £1,200 a month, social housing tenants pay much less.

Some of the privately owned homes have been fitted with double glazing while the BHP properties have not. Energy bills for the latter are therefore much higher.

There is considerable and much appreciated green space on the estate.

I give this as background to the Housing Assess Management Strategy Report that is going to the Brent Executive tomorrow.  The report contains a mixture of measures which involves  disposing of some properties and selling the freehold on some blocks.  It involves plans to build a small number of new units of existing estates, initially between 70 and 100, to cater for larger families and a long-term 7 year plan for 1,000 new 'affordable' homes.  Importantly there are plans for refurbishment of existing stock. Clearly new homes and refurbishment will be very welcome.

The plans will be financed by the sell-offs, some borrowing and controversially rent increases.The latter has caused concern amongst Labour Party members as well as tenants because the documents going to the Executive seem to indicate that existing tenants' rents will increase over the next 5 years to 'converge' at 80% of market rents, which by some definitions is an 'affordable rent' - a figure the Council has challenged in the past..  At the same time the new properties will be immediately let at an affordable rent with some caveats (see extract below).

The concern is that the convergence strategy will result in a likely doubling of rent for existing tenants over the next 5 years at a time when incomes are static but the cost of living is rising and benefits have been cut.

What I and others have been trying to work out from the documentation going before the Executive is whether that is what is really envisaged and hopefully, as a result of protests due to representations that will be made, it will become clearer. The figures quoted do not seem to equate to a doubling of rent.

Meanwhile here is an extract from the Appendices that readers

The extract below from the Appendices sets out the rent strategy and I leave readers to try and interpret wht it means concretely:

Following rent convergence for the annual increase  to be set at CPI+1%
For properties to be re-let at target rents
For consideration to be given annually to restraint in rent increases for 4-bedroom and larger properties in order to assure affordability under the overall benefits cap
For new-build and newly-acquired properties (except where required for decant) to be let at affordable rents in line with the thresholds set out within the Council’s Tenancy Strategy.

Context
Rents are the primary income to the HRA business plan and provide the funding to support stock investment and for new development.
In recent years the Council has increased rents in  line with the government’s rent convergence regime. The government has recently issued guidance
that rent convergence should end from 2015/16 at which point the majority of the HRA stock will not have achieved convergence. Currently the Council retains the discretion to not follow the recent guidance. Further clarification of the
position by Government is expected by early 2014 and account will need to be taken of this.
The government has also issued recent guidance that from 2015 rent increases will be linked to a different inflation index – and be based on CPI plus 1% rather than RPI plus 0.5% as previously.

Approach
In order to provide a secure basis for the funding of the Asset Management Strategy, a rent policy for the next five-year period will operate. The policy will be for rents for existing tenants to continue to rise in line with the principles of the government’s previous Rent Convergence regime unless government directs otherwise. For 4-bed and larger units rent increases may be constrained in order to assure affordability under the Overall Benefits Cap.

In order to support viability, new homes will be let at Affordable Rents. These will be limited to varying percentages of the market-rent depending on the size of the unit in order to assure affordability for those affected by the Overall Benefits Cap.