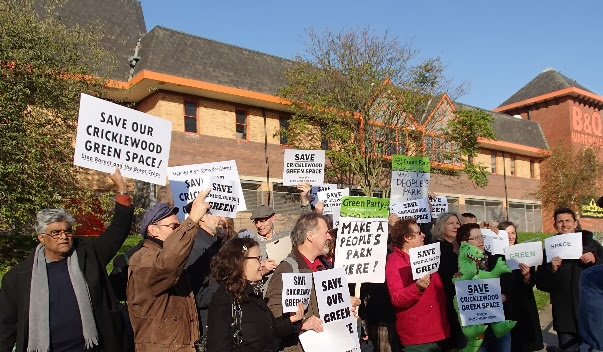 Demonstrators protesting against the possible loss of the green space outside B&Q in Cricklewood Lane in a deal between Barnet Council and the Brent Cross developers, coped quite well when they were joined by a dinosaur. 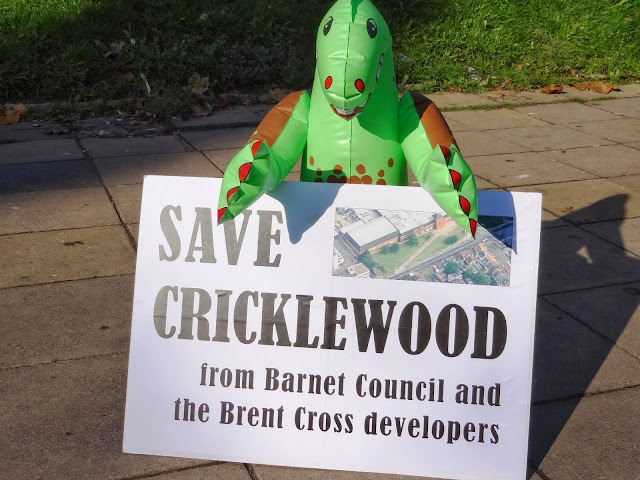 They were rather more surprised when they were joined by Jonathan Joseph, of Brent Cross Cricklewood Development Partners, and the man they have been battling since at least 2009.

They were even more disconcerted when he went to buy coffee and distributed it amongst the crowd.

We live in strange times.

Despite the coffee the campaigners were vociferous in  their defence of the green space which they admitted was not up to much at the moment, but could be transformed easily into an attractive 'People's Park' with a children's playground and facilities for all ages in an area where concrete and traffic prevails.

People who came over to speak to us from the adjoining side streets were adamant that, even in its present state, the space with its grass and trees was important to them and offered some solace in a hectic urban environment. Local people passing by were keen to sign the petition which can also be signed on line LINK

Eventually the dinosaur and Jonathan Joseph seemed to have found something in common...

"... the dinosaur and Jonathan Joseph seemed to have found something in common..."

Both are associated with a prehistoric, car-based Brent Cross expansion scheme?