Last night's livefeed of the Brent Council Meeting was hailed as a breakthrough but was characterised by breakup of the sound. On Twitter Cllr Denselow, the Executive's own 'techie' blamed exhausted batteries for the failure of the microphones, but today said that wasn't the problem and the microphones would 'have to be sent back'.

The problem comes on top of IT and telephone problems, as well as a shortage of 'hot desks' that leaves some staff finding it easier to work from home, which some says, despite the £100m cost of the Civic Centre, was the plan all along. I hope the Council give the home workers an allowance for their winter heating.

The result was a preponderance of pro-Council and pro-Labour tweets, which as I tweeted (but not published on the Council feed) rather made a nonsense of the idea of a public debate using social media. 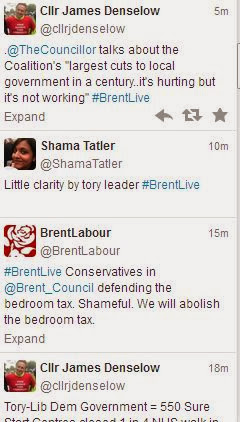 In fact the Council's House Rules on Social Media severely restrict what can be said LINK with several catch-all rules including:

If you’re offensive about the council, or anyone who works for us, or runs the organisation, we will remove your comments. Comments that are likely to bring the council into disrepute will be removed

Personally, I think a selective twitter feed itself brings the Council into disrepute.
Posted by Martin Francis at 22:40:00

They call the live feed an attempt at inclusive democracy yet they censor people's tweets? I wonder if the camera person has also been instructed not to film sleeping councillors?

I still Believe that Looking to politicians to deliver us is comparable to Employing a Hopeless alcoholic to Drive a bus or Train.
The end result is Going to be Pain...and politicians have caused us more than enough pain through out the years.
They are also The Ones that cause much Tears and Misery.
I Hope I Live to See the day When They are Swept up and Thrown Away.
I'll cry Tears of Joy Then.

People of Brent
Never put your Trust in anyone That Will give Their Approval to something That goes on to cause endless deaths Each Year.
Because by Them Doing That They are Allowing you to be exploited and are putting Profit before Principle.
They oooo and arrr about Deceased disgraced Ex DJ's and Jump on their High horses about Protecting Children from online Abuse
But They Do Little or Nothing to Protect Those Same Children that will grow up to start abusing themselves with Tobacco.
They May Not Want you to be Abused by People Online But They Certainly Leave you open to Exploitation by the Tobacco business.
Its Time to view politicians for How they really are.
I mean for example another Ex MP has pleaded guilty to Fraud recently and Yet he was meant to be serving the public and yet behind the false front he was cheating.
And again I'll remind you That Our Government are the ones that approved of the sale of Cigarettes that is now the second biggest cause of death in Britain.
You cannot Trust anyone that will approve of such a Thing.
We deserve a Government that truly cares about us...not one that will us as things to be exploited.
Look at the borough we live in.
It resembles one big ashtray and the green areas have become the new style dustbins.
Paving stones are broken and uneven, and we are left to suffer in poor quality social housing.
It is in vain that the politicians keep squabbling with each other as They desperately Try to win us over so that they get to get behind the steering of government.
Look at the World They have created...are you Happy?
10 downing Street and the houses of Parliament is overflowing with Stinking Rubbish and they are Bins
Desperately in Need of Emptying.
my words may be ungracious but you know It's True.
We deserve so Much Better Than to be Governed by People that Exploit and manipulate us as well us Let us down continually.
anyone That will leave us open to be exploited by Tobacco Companies and any Government that would
cheat the people That voted for them cannot be Trusted.
That is the Truth and You can be absolutely Certain that whoever Wins the next general Election won't Deliver us Out of the misery we are Living in.
all they will do is Make Promises and changes
but they will never Deliver us.

Other than that, everything alright in your world?

Firstly, the Council need not worry one little bit about anyone bringing them into disrepute; they can do that very effectively themselves. As to Ann John's inaudibility, no great loss, and makes a pleasant change from the incomprehensibility of her actions.

I still View Brent as a haven of exploitation and Torment.
Supermarkets are having the time of their lives thanks to our extremely corrupt and greed driven government.
They are able to had over packet after packet of lung and throat cancer death causing Tools day after day.
Only thanks to the corrupt government are they able to do that.
Oh yes and another thing they are able to do without a care is entice us to gamble.
So along with the public waking and going to buy another packet of health ruining tools, they are also able to gamble by buying lottery tickets.
Now many will say but what's wrong with buying a lottery ticket?
Well, it doesn't cause lung or throat cancer, it doesn't turn the dirty cracked uneven pavements we walk on day after day into new style ashtrays, but it can become addictive and could ruin a person financially.
And I think it is safe to assume that many have already brought upon themselves financially thanks to gambling.
Trust me people the country we live in is extremely corrupt.
If the police managed to lock up every drug dealer etc etc, it still wouldn't be safe to put our feet up and relax because we still live in a system that thrives on trapping as many people as possible and of course they always make sure they attach a price tag!
It's no wonder the place that is meant to be our home is so corrupt.
Its like there is an air of recklessness everywhere.
For example the christian religion is meant to be a haven of hope and protection, its like a spiritual washing machine.
People go in morally dirty and even filthy in many cases but if they take it seriously, they emerge spiritually and morally clean.
yet surprise surprise
just like the political leaders have misused their authority which has caused immense suffering and exploitation, Likewise the spiritual leaders Have also Failed to do their job properly and so as a result many have been mislead into believing that it's all about eating turkey and buying expensive presents on december 25th.
and then buying easter eggs etc in april etc etc.
when really true religion is not about dec 25th or buying easter eggs etc, those things have been introduced in order for people to use them as a means of making money.
but its all a delusion because do the people using god as a means of making money think that god can't see through it?
can the person powerful and supremely intelligent enough to create the earth and all its inhabitants
not be able to discern when he is being used like the government use the public?
think about it?
one more thing.
if there was such things as aliens, and they walked into a supermarket and saw the staff handing over cigarettes in exchange for money and later found out that cigarettes cause death and that the government was raking in billions in taxes and then they heard the prime minister talking about protecting children, do you think they would buy that?
I doubt it.

Trevor, are you sure you aren't being paid by Brent to demonstrate the wisdom of censoring people's democratically expressed opinions?