Ken Montague: 'He made the seemingly impossible happen...and without fuss' 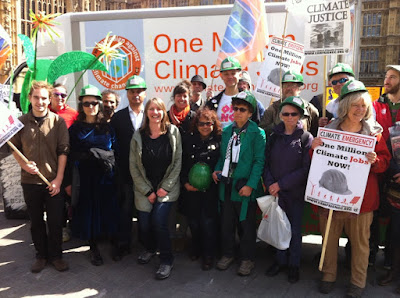 Tributes to Ken Montague from Campaign Against Climate Change

We are deeply saddened at the death of our friend and great climate campaigner and socialist, Ken Montague, who passed away last Friday.

Ken's work was unseen and often unsung but without it much of what the CACC trade union group have done in the last few years would not have happened. Ken's work allowed the trade union group to campaign increasingly effectively within the wider trade union movement, to develop a deeper understanding of the climate crisis, its relevance to the struggle of working people and to counter the false narrative that jobs and the environment are mutually exclusive.

Ken had so many skills that he put to use in the climate campaigning work which he prioritised in the final years of a lifetime of campaigning for a better world. Most especially Ken was a great organiser, he made the seemingly impossible happen and always without any great fuss.

One of his greatest feats was the organisation of the climate jobs caravan which involved organising two low emissions vehicles and the co-ordination of many, many people and events across the UK. The two week long event was hugely creative and successful. Arriving in towns and cities with a visible display of the campaign on the sides of the two vehicles, the tour was able to put the case for trade union campaigning on climate and for climate jobs in towns and cities across the country. It was a huge logistical operation, the bulk of the work carried humbly, as usual by Ken and was a testament to Ken's organisation, perseverance and equanimity.

Ken was also a great negotiator of situations and especially people. He had insight and empathy into individuals, their concerns and complexities. He used this regularly to great effect to help progress work in which there were conflicting views about how to take things forward. Ken didn't slide over differences of opinion but he always looked for ways through which encouraged understanding between people and more often than not a solution.

Such skills were last employed in one of Ken's last successful achievements before the news of his illness which was the organising of the first official fringe meeting for the CACC trade union group at this year’s TUC conference.

This time last year Ken was in Paris alongside 10,000s of climate activists from across the world, demonstrating for climate justice, despite a ban imposed by the French government. Many of us have wonderful memories of Ken from this time and the meetings and protests that he took part in. Coming out of Paris, Ken shared an optimism and determination, alongside others, about the growing climate movement and the necessity of an even more effective movement able to make connections and alliances in order to deliver the changes needed to tackle climate change.

It was as a result of the meetings and discussions that Ken had in Paris that he proposed to the CACC trade union groups the idea of a conference on climate change and refugees. Ken took the initial steps of setting this up, putting in place, despite as ever many logistical obstacles, the key organising group, speakers and venue in the months after his proposal. This important conference will take place next year on February 11th.

When Ken informed us only weeks ago that he was ill with cancer and his illness was terminal we all hoped that Ken would be able to be with us for this very important conference he had initiated. Unfortunately, Ken will not be there. But the conference should be and will be a huge testament to the work that Ken did and the immeasurable contribution Ken made to fighting for an equal, just and sustainable world.

We will all miss him greatly. He leaves an enormous gap which we will find hard to fill. We will miss his hard work, determination and positive outlook. We send our deepest condolences to Ken's family - his partner Janet and children Brendan, Kate and Alex, who have lost Ken far too young.

Ken Montague died on Friday. When we heard the news, Nancy said, ‘How incredibly sad. He was so very nice.’

It stood out. Ken was nice because he was such a good man. He was kind. When people talked, he listened. He sympathised.

Another way he was good was in his dedication. He was a dogged, determined man, but not harsh. Ken was a trade unionist all his life. He was the secretary of Brent Trades Council during the Grunwick dispute, and secretary of his further education teachers branch for many years. He was a loyal member of the International Socialists, and then the Socialist Workers Party.

In his sixties Ken dedicated himself to climate activism. For the last several years he was secretary of the trade union group of the Campaign against Climate Change. It would be wrong to say Ken worked tirelessly, because he got tired. But he kept on working.

There was a thing that happened over and over at our meetings. We would be going through the agenda, generating jobs that needed doing. Then there would be a silence while none of us volunteered. Someone would suggest that Ken do it. Ken would nod. Someone else would say that we had already asked Ken to do too much, and other people would nod. But then another person would say, but Ken will actually do it. And heads would nod. Ken would say, I’ll do it, because he knew it needed doing. And also, he knew that actual human labour was what changed the world.

He did it because he cared. To listen to him talking about the planet, or socialism, or trade unionism, was to see someone putting his whole body, a whole world of emotion, into what he was saying. There was something about his shoulders, and the way he leaned forward. But he was never loud. Ken was passionate and gentle.

People said Ken was modest, but the word isn’t quite right. He was humble, really. He thought humble people should rule the earth. I think the way he saw it was, he was doing what he could. He held our one million climate jobs campaign together. He organised all our conferences. He talked to people. He put his heart into organising for a climate jobs presence at the Paris climate talks in 2015.
He never claimed credit, never pushed himself forward as a speaker. In fact he was shy about
speaking. But we started asking Ken to speak all round the country about climate jobs. I asked people how he was a speaker, and they said wonderful. Then I listened carefully as he spoke a few times. Ken was not showy. He was not loud, though everyone in the room could hear him. There were no rhetorical flourishes. What he did, I began to realise, was that he explained the situation we found ourselves in and what we had to do about it. And he explained it so clearly that everyone in the room could understand. I realised I was listening to an experienced, and very good, teacher.

I think that was at the core of Ken’s humility, his goodness and his dedication. Always it was for the other person. He wanted people to understand, so we could do something.

Ken was my friend, too, and I’m proud of that. After they found the cancer he died so much faster than anyone expected. Our thoughts are with his partner, Janet, and his children, Brendan, Kate and Alex.