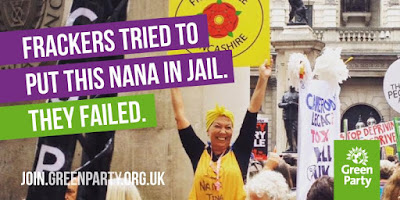 The Green Party has celebrated the dismissal of the case against Anti-Fracking Nana Tina Rothery today as a victory for the future of peaceful protest.

Rothery, a 54-year-old grandmother, could have become the first ever climate change protestor to go to prison when she appeared at The Law Courts in Preston today (Friday 9 December 2016).
Rothery was taken to court by fracking firm Cuadrilla for trespass after she staged a peaceful protest in a field near Blackpool which was under consideration as a fracking exploration site.

She was ordered to pay the firm’s legal bills which stood at more than £55,000, and could have faced 14 days in jail for refusing to pay. But today a judge dismissed the case against her.

The Green Party has given Rothery lifetime membership in support of her fight against shale gas exploration in Lancashire.


Today marks a great victory for everyone who believes in the right to peaceful protest and the fight against climate change. It would have been utterly unjust to jail Tina Rothery, who has shown exceptional courage protecting her community from the threat of fracking.

It is an honour to give Tina lifetime Green Party membership in recognition of her bravery in the fight to protect our planet.


We say today that companies targeting individuals will meet ever stronger opposition. Fracking completely undermines the international climate commitments to limit warming to 2 degrees as made under the Paris Climate Change Agreement.

If we are to stop climate chaos, there can be no new dirty fossil fuel infrastructure. No pipelines. No mines. No fracking.

I am not commenting on the subject of this blog, even though it is definitely a "good news" story.

I have noticed that this is the 790th "Wembley Matters" blog of 2016, beating its previous record number for a calendar year (789 in 2013). Add to this that the total number of page views for this blog site is rapidly approaching TWO MILLION.

I would like to take this opportunity to say "THANK YOU" to Martin for all of the hard work he puts in to provide his readers / followers with an interesting and highly useful source of information.

With Brent Council only issuing self-congratulatory press releases, lumping them together in its "Your Brent" online magazine, and failing to deal with many issues of real concern to local people in any of its PR output, "Wembley Matters" is a real asset to our community.

Please join me in thanking Martin, and make the most of the opportunity that "Wembley Matters" provides to share your views, either by commenting on any blog on a subject that is of particular interest to you, or by taking up the invitation to submit a "guest blog" of your own on a subject which is broadly in the field of social or environmental justice.

Thanks for noticing the stats Philip but especially for your kind comments. As always I owe much to you for your contributions to WM that I know from peronal contact are much appreciated by readers.