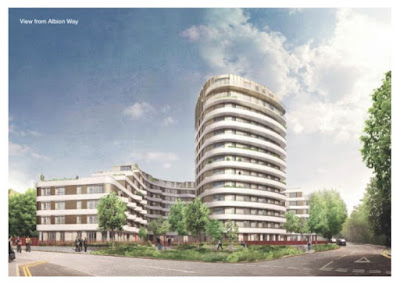 The officer's report has the familiar mantra for the Quintain area which considers that the height of the building, though not meeting planning guidelines, can be approved because of its good design and the height of other buildings such as Victoria House, in the near vicinity; and the proportion of affordable housing at 22.6% not meeting the 50% target is approved as a result of the financial viability assessment carried out by advisers.

The buildings front on to North End Road and follow the loop of the Wealdstone Brook at the back. The aim is to partially naturalise the Wealdstone Brook which is currently in a concrete culvert although lined by mature trees.  Naturalisation was a long term aim of the Wembley Plan to improve the environment but it is unclear from the application whether there will be public access.  I am awaiting  response from the Planning Officer to my query. 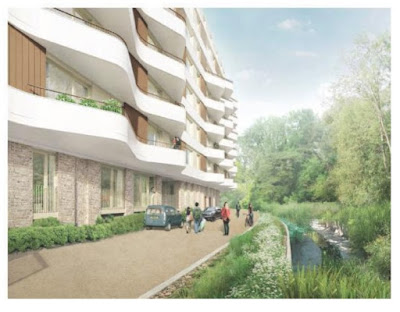 The development is next to Danes Court and Empire Court which are four storeys high and set in gardens. The Courts will now have tall buildings at each end of North End Road. In the original Wembley Plan there was a proposal to re-build the North End Road junction with Bridge Road where the Michaela Free School now stands. I have asked Planning about the current status of this plan. 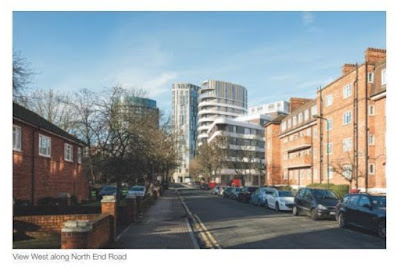 One of the difficulties of the site is that it is surrounded on what could be seen as three sides by the Wealdstone Brook and this is a flood risk area. See the line of the brook below: 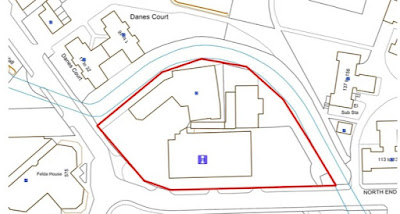 In a period of extreme weather caused by climate change there is obviously a need to build mitigation into the development. The Planning Report sets out the risk and actions taken to mitigate the risk. I publish it below for the record. In the event of  extreme flooding the site has the potential to become a temporary island.


The Wealdstone Brook is a 2m wide culverted watercourse, the base level of which is some 2.5m  below adjacent ground level. The canalised brook is a tributary of River Brent and passes through the area within the engineered structure, and only becomes ‘naturalised’ where it emerges further south.

112.    The application site lies within Flood Zone 3a, defined by the NPPF as having a high probability of flooding. Development classified as ‘more vulnerable’ is only appropriate in these areas following application of the Flood Risk Sequential Test and where the Exception Test has been applied in full and has been passed. The revised FRA submitted has now used updated and revised climate change allowances to assess flood risk on site using the modelling already carried out and approved in support of application at Wembley Point for the Wealdstone Brook. The Environment Agency (EA) accept the design flood level detailed in the submitted FRA.
113.    The NPPF requires the Exception Test to be applied in the circumstances shown in Table 3 of the ‘Planning Practice Guidance: Flood Risk and Coastal Change’. Paragraph 102 of the NPPF makes clear that all elements of the test must be passed for development to be permitted. Part 2 of the test requires the applicant to demonstrate that the development will be safe for its lifetime taking account of the vulnerability of its users, without increasing flood risk elsewhere, and, where possible will reduce flood risk overall.
114.    The flood modelling prepared by the applicant shows that North End Road would be inundated in both the 1 in 100 35% climate change event and the 1 in 100 70% climate change event, which appears to be the only access/egress route. This means that safe refuge within the development is required for future occupants as safe access and egress cannot be achieved.
115.    The finished floor levels of the development have been raised above the 1 in 100 chance in any year, including an allowance for climate change flood extent. This means that floodwater is unlikely to enter the property during a 1 in 100 chance in any year plus climate change flood extent.
116.    The applicant has overcome the EA’s previous objection by submitting an acceptable emergency flood plan framework to the local planning authority that deals with matters of evacuation and refuge to demonstrate that people will not be exposed to flood hazards.
117.    The full detailed flood plan for the site will be secured by condition prior to the occupation of the development hereby approved.
118.    To summarise, the applicant has demonstrated that the site has satisfactorily addressed the EA’s previous objection, demonstrating that people will not be exposed to flood hazards and therefore the application is acceptable in flood risk terms.