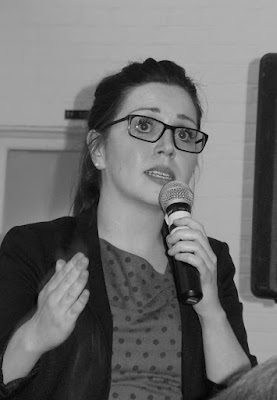 I understand that Cllr Roxanne Mashari has resigned from the Brent Cabinet.  The resignation follows the controversy over the Granville South Kilburn development when she appeared to have been made the scapegoat for lack of consultation when the actual decisions had been made by Cllr Butt who holds the property portfolio. LINK

Neither Butt nor Cllr McLennan, deputy leader, were at the Scrutiny Committee where Cllr Mashari had to answer critics, including Cllrs John Duffy and John Warren.

Cllr Butt, in addition to his own duties as leader, is currently temporarily holding the Children and Families portfolio.
Posted by Martin Francis at 10:18:00

Hum, mixed emotions: terrible to see crooked Butt continuing to hoard power - but Mashari is just another cynical professional politician, as shown by the shameless way she reneged on her election pledge to Preston Library.

How many cabinet members have now resigned in disgust at Councillor Butt's behaviour? 4? 5? Good job the Labour group is quite large I suppose or he wouldn't be able to find replacements.

Wow. Hung out to dry by Butt. Actually looked like she might engage more with residents over regeneration that Margaret McLennan had ever done (not that that says much). She also made clear she disagreed with Butt over the separation of the housing and regeneration portfolios. Without being a particular fan of Mashari, I see this as another example of Butt only wanting total yes people in Cabinet.

What Leadership! "The Butt stops here"? I don't think so.

Mashari isn't popular with her residents. I know quite a few who are distinctly annoyed with her lack of response. I suspect she has a new job lined up.

There was a very clear election pledge to support Preston Library, and (so far) I don't think anyone could be said to have reneged on that pledge. If that happens then we'll have plenty to say about it. In the meantime, there continues to be a very good library in Carlton Avenue East - do come and visit, we have a very good film on in our cinema at 7.30 this evening.

I suspect that the main issue is still Granville redevelopment. Although Cllr Mashari said she could only promise clarity on the way forward (rather than apologise for the past) it may be that she was being thwarted in that endeavour by Cllr Butt. At the Scrutiny Call-in of the Granville/Carlton South Kilburn redevelopment she said (my report as Minutes not yet available for either of the recent Scrutiny meetings - which doesnlt help Scrutiny of course): Cllr Rita Conneely said that it was important to be clear whether the November report, which was actually the subject of the call-in, was an extension of the July report or an over-turning of that report. In response Cllr Mashari said that 'we have more or less said that complete demolition is not now an option. There is a step change from the July report and that will be shown in the coming months.' Could it be that Cllr Butt and his nominee would like to put demolition back on the agenda and Cllr Mashari baulked at that?

She's not popular with Labour Cllrs either Alison. Or with Officers

They will never get the building on a peppercorn lease. Never. It's only a matter of time before the pledge is formally broken

I've had it confirmed in broad terms that Butt's interference is the main issue for Mashari's resignation. It will be interesting to see how Granville plays out to give us a clue as to the specific.

This feels like vital services and well-loved historic buildings are being used as political footballs by the Leader and his crew. The recent Masterplan update boards don't even include the Carlton and Graville buildings as heritage buildings. Yes, South Kilburn is a long way from Civic Centre but we are still part of Brent, and should be treated with respect. Mr Butt, you must pay attention to wider community needs.

I'm very surprised she gave up the allowance, as she has no other employment. Two things occur to me: she was pushed out hard by Mo. And/or, she's after standing as Leader in May.

21:35. Most of Brent is being ignored. Wwe're still fighting the blasted Brent Cross mess, which, with a few honourable exceptions, not one Brent councillor has any knowledge of, or gives a damn about. That's a disaster for Dollis Hill and wider.

I'd heard the officer thing from some who no longer work there.

I think Michael Pavey has taken over her job with Sarah Champion, either that or she employs 2 Brent Councillors!

Yup, I think Roxanne left that a while back. The register of interests is wildly inaccurate, anyhow.

Shama Tatler will replace her. She's a teacher which is a demanding job (to put it mildly!) so I wonder how much time she'll have. Having a full time job alongside a cabinet position is just one of the reasons Margaret McLennan is so dreadful, she doesn't have the time to study her brief in order to challenge officers. (Whether she has the inclination is another matter).

its interesting why she resigned .All the cabinet agreed the report to demolish the Granville Centre in July Not Just her.It should also be be remembered that all the cabinet knew no consultation had taken place ( I email them , but they ignored my email)but pushed for the demolition.I am not sure if she was the most responsible , but she did nothing from the july meeting until a couple of days before the November meeting anmd that was not good enough.

Why did you called for her resignation specifically? Was she just long hanging fruit or did you fear calling for anyone elses resignation?

Its a positive if people have jobs outside politics.

Yes, she did indeed leave. She'd had enough - I suspect you can guess of what.

Roxanne now appears to be a Director of something called The Women's Budget Group.