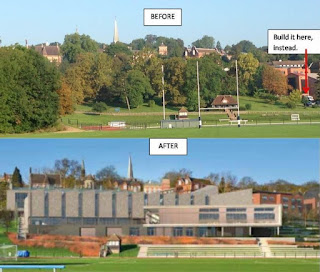 This is an update from Harrow Hill Trust who are opposing Harrow School's bid to build on Metropolitan Open Land and have put forward alternative proposals. I have added links to email addresses for your convenience:

11 Dec 2016 — At the Harrow planning meeting there was a motion to refuse the planning permission. The minutes don't tell you how your Councillors voted. However, so that you know how your particular local Councillor voted it was as follows.

Councillor Keith Ferry, Labour for the ward of GreenHill voted against the motion to refuse it, and as Chair used his casting vote to defeat it. Also he was the only Councillor to vote against the deferral.

Councillor Simon Brown, Labour for Headstone South, (was standing in as a reserve for Councillor Anne Whitehead, Labour for Wealdstone) voted against the motion to refuse.

Councillor Barry Kendler, Labour for Edgware voted against the motion to refuse, but tabled the motion for deferral which was supported by all except the Chair, Councillor Keith Ferry.

So if you are in the wards of the Labour Councillors mentioned above please do let them know your views and the strength of local feeling. The brownfield option is what residents want and it is a much better site for many reasons and a much better fit for London Plan policy 7.17. There is even non-metropolitan land on the existing Northern boundary to allow an expanded footprint. We will be launching a call to action in the next update. Thanks again for your support, it is appreciated, and will be appreciated by our children.