Wembley Stadium due to disappear behind more high rise flats 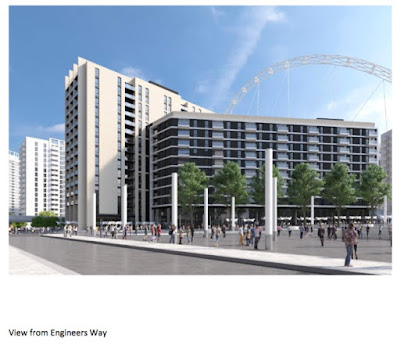 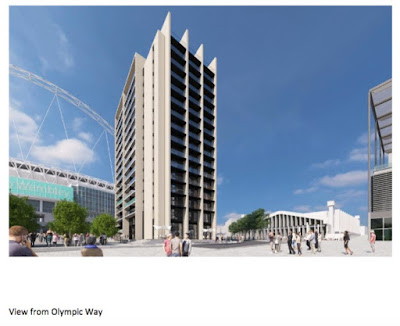 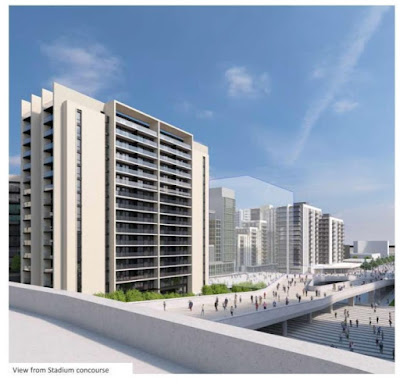 The pictures speak for themselves but officers think the plans are superior to those submitted in 2007 - although a lot has changed in the area since then. Officers say that no affordable housing needs to be provided on this site as it is over-provided on other sites in the overall Quintain development.

Powerleague will be temporarily housed in a 'meanwhile' space at Wembley Retail Park close to the Yellow Pavilion. Incidentally the controversial Powerleague proposals for Kingsbury High School appear to have stalled.

The housing will be 11% studio, 41% one bedroom, 46% 2 bedrooms and 3% 3 bedrooms (yes I know it doesn't equal 100% bu that's what the report says). There will be an artificial grass lawned terrace at first floor level and another terrace on the 10th floor as well as a small public square.

The retail space will allow 'outdoor cafe culture' to spill out into the area.

Wedged between the Stadium and the Arena clearly there will be noise problems but 'acoustic solutions' are planned and potential buyers can't really be aware of the potential problems.

The reports says that notices of the application were sent out to nearby owners and occupiers including the the London Designer Outlet, Wembley National Stadium, Hilton Hotel and Raffles House but rather surprisingly at the time of the publication none had responded. There is no record of any representations from Tokyngton ward councillors.

Is this not the land where we were told that marvellous landmark offices were going to be built which would be the prestigious landmark headquarters of some big name international corporation? Oh dear Mr Butt didn't anybody want to come. Another aspirational bubble bursts !!!

Butt there is no need for offices on that site now, as Brent Council are letting out much of the office space in the Civic Centre, while its own staff are squeezed into an ever shrinking "hot desking" space.

What an eyesore, so much for a world class destination, iconic stadium hidden behind more tower blocks with no architectural merit whatsoever it reminds of the song "little boxes little boxes and they are all made out of ticky tacky and they all look just the same" i've past caring, and neither will the Chinese who will buy them and won't live there so Quintain scores again. However, a would be terrorist might like the view because a rocket launcher wouldn't miss from there.

Surely being built so close to the stadium this has some serious security implications for the FA and Football in general. I am surprised they haven't objected so far.

From the artist's impression, it looks as if the proposed new building will overshadow the Civic Centre. Brent's planners and Planning Committee might like to consider how this would affect the "eco" balance of their award-winning BREAM(or whatever it is)-rated showpiece HQ.

Also, allowing the view of the stadium to be blocked will lose the Council income from the TV / sports reporters who broadcast about events at Wembley from the Civic Centre's winter garden.

And that is quite apart from the planned building having no architectural merit for such a prestige location!

Yes true. It might end up that the only Civic Centre part is the broom cupboard and the lavs.

BREAM-rated? I always thougt theres something fishy about the place

Yes Philip you have extremely good points there. How much has it been investigated what effects these tower blocks will have on the Civic Centre. I bet it hasn't even been considered. I am sure that when the Civic Centre was very carefully designed the designers weren't asked to design a building which would work to its highest efficiency when overshadowed by tower blocks which had not even been considered at that time. Since all the tax payers and residents of Brent have an interest in the Civic Centre (whose money was it that was used to pay for it?) we should all have been asked for our views on these surrounding blocks and the effects on our building. Is this not a failure of planning notification system?-especially if any negative effects on the Civic Centre have not been sufficiently investigated.

This is now a reality and it's absolutely horrid. Was there no protest over this development?