Ken Montague, a well known and respected local Brent activist who had recently moved to Brighton, died on Friday not quite a month after being diagnosed with terminal cancer.

In perhaps his last email to friends and comrades after the diagnosis Ken finished by saying, 'Please pass on the word to those that need to know and say that I am relying on you to keep up the fight for better and more sustainable world. My only regret is that I'm bailing out so early. In comradeship, Ken'

I have offered to host tributes on Wembley Matters and begin with this from his colleagues in the University and College Union:

We regret to announce the death of Ken Montague, known to many of us as a socialist, climate change activist and member of the UCU London Retired Members branch. His contribution will be sorely missed. We send our condolences to his comrades, friends and family.
Merilyn Moos, vice chair of the retired members branch, who knew Ken for many years, has written this obituary.
I knew Ken as a comrade and friend from when we were in our early 20s. His sudden death, at 70, is a terrible blow, politically and personally.

Ken became an FE lecturer, first in what was then Kilburn Polytechnic (where I taught), then at Barnet. Before he retired, he did some part-time teaching at Middlesex. His main area was literature but he was deeply involved in Media Studies. His students loved him, especially those he took on annual pilgrimages to Cannes so that they could witness the iniquities but also the ‘alternative reality’ of the film industry for themselves. He was the Branch Secretary for what I suspect he felt was far too long, fighting the college management’s petty vindictiveness as well as the grander issues of conditions and pay. One of the crucial (and ultimately successful) campaigns he was crucially involved in was for the reinstatement of John Fernandes, a black lecturer at the College of North West London who was being dismissed for revealing the racist content of essays by police cadets whom he taught.
He was a member of IS, (International Socialists) then SW (Socialist Workers Party), an organisation which, with a couple of outs and ins, he remained a member of for all his life. He was passionate about his politics but never became a hack nor did he become bureaucratically compromised, retaining a fundamental commitment to grassroots struggle all his life.

The first massive class struggle I remember him in was at Grunwicks. He was the Secretary of Barnet Trades Council at the time and was on the Grunwick strike committee. From the beginning he stressed the importance, especially given the concealed racism, of solidarity between white, male, manual workers and Asian women and was vociferous in demanding, mass pickets to shut down Grunwick. As Ken wrote in SW: ’There was lots of talk of support from the top of the unions but it was mostly just talk.’ Indeed, as I remember vividly the turning point in the dispute came when, after a few weeks of mass pickets, the TUC (in the figure of Jack Dromey, then of Brent Trades Council, and indeed, Scargill,) marched us away from the gates. Ken would not have been in agreement with that. 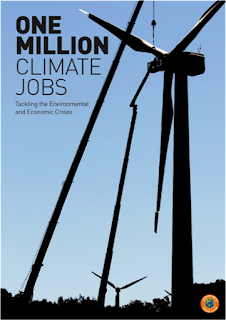 Ken continued to be active, campaigning for example for the Respect candidate in Brent in a number of elections. But his next major and long-term involvement was over climate change, which, in recent years, including campaigning against fracking. He emphasised throughout the importance of trade union support and organisation. He was instrumental in setting up the Campaign against Climate Change Trade Union Group (CACCTU) and became its Secretary. He took a leading part in organising and promulgating the influential ‘One Million Climate Jobs’ booklet and campaign, both in Britain and internationally (supported by Jeremy Corbyn though one wouldn’t know it).

Last year he attended the Paris Climate talks as part of the Global Climate Jobs movement. Global Climate Jobs is the network of all the national climate campaigns, which he was instrumental in setting up. The International Trade Union Confederation (ITUC) held an alternative summit in Paris, attended by approx 40 climate jobs activists from 20 countries, which launched a Global Climate Jobs campaign. Ken always emphasised the crucial role of trade unions.

As he wrote afterwards about Paris:

It is clear that the leaders of all the countries in the world have failed us. They did so because nowhere did we have the political and social power to make them take decisive action on climate… We have to mobilise... After all, we need cuts of 80% in global emissions, as soon as possible.

We have to fight to leave the coal, gas and oil in the soil, he said. So we need to replace fossil fuels almost entirely with renewable energy. Ken could always be found doing the organising, writing and distributing the leaflets, speaking at meetings and rallies (which he didn’t enjoy), making the contacts, arguing with rank and file trade unionists - but never claiming the lime light.

The last event he was organising was the Conference Climate Refugees, The Climate Crisis & Population Displacement. Building A Trade Union & Civil Society Response (to be held on Saturday 11 February 10pm - 5pm, NUT, Hamilton House) Let’s support it.
Ken died too young and we shall all miss him.

For much of his life Ken lived in Cricklewood and was active in many local campaigns against, council and goverment cuts, against racism and against war. He was the founder and backbone of the Brent Campaign Against Climate Change and a key organiser in Campaign Against Climate Change nationally and its Trade Union group. It was an honour to have worked with him on these campaigns and as a fellow UCU member.
Posted by Martin Francis at 16:29:00

On behalf of the Campaign Against Climate Change steering committee and its trade union group, I'd like to echo the sentiments about Ken written by others. Ken was first and foremost a socialist activist, but what made his activity so powerful was his warm and friendly nature, and most importantly, his ability to bring people together. Ken never demanded credit for his hard work, though he ought to have it. A year ago he was travelling around Paris organising networks around the Global Climate Jobs campaign, and just recently he was hard at work on a trade union conference for 2017 to highlight the links between global warming and refugees. His contribution was enormous. Ken was a lovely person, who will be missed by many people. We will continue the struggles that Ken devoted his life to.

Nick Grant writes: There is little I can add to Merilyn's account of Ken. Over forty years of living in North West London as an SWP member I always put huge store in his wise judgement and deliberations, as well of course as sharing his love of football and the occasional glass of something tasty. From Grunwick to the Campaign Against Climate Change Ken was always someone to both lead and sustain struggles. I recall when I first met him that he visually reminded me of an Essex comedian and occasional British film actor Cardew Robinson. Something to do with those twinkling eyes and slightly goofy top teeth. Whilst Ken himself readily saw the contradictory and humorous aspects of life and political struggle, he was no joker. Erudite, passionate, generous in every respect, I will miss him enormously.

A sad loss. Like many socialist activists in Brent I knew ken for many years and always got on with him, even when we disagreed. Such a shame that his time in Brighton should be cut short so abruptly.