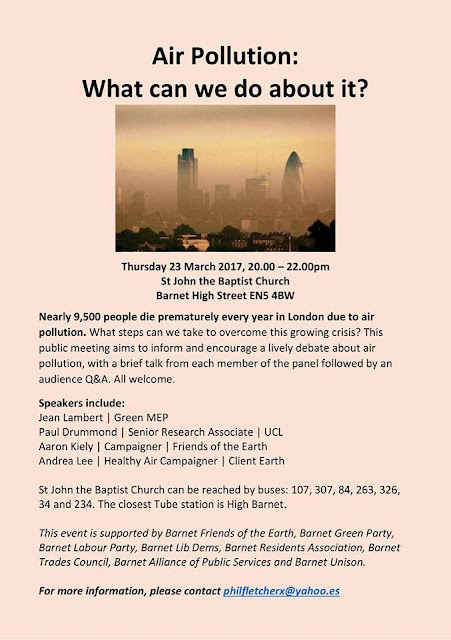 Great to see a cross-party event supported by so many other organisations - an example to other areas.

Jean is a founder supporter of Clean Air in London , and as an MEP has pressed the European Commission to take action against the UK government for failing to meet legally binding EU air quality standards. She has also made numerous air quality consultation responses to the London Mayor and the UK government, and has published the pamphlet Air Pollution, London's Unseen Killer, which was widely distributed across London.

* Aaron Keily from Friends of the Earth England , Wales and Northern Ireland


Paul has led work on looking fiscal ways of how a move away from diesel vehicles could be encouraged by taxation methods.


ClientEarth have successfully sued the UK Government for lack of action on implementation of measures to combat air pollution.

Each speaker will give a short talk, and afterwards there will be a Q & A session/discussion.

This fund-raising action will be carrying on after the Barnet FoE Air Pollution Meeting.