Granville and Carlton submission on the South Kilburn Masterplan 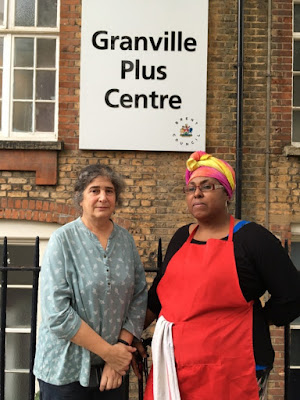 The following submission on the SDP Masterplan for South Kilburn has been made to Brent Council by the users of The Granville Plus Centre and The Carlton Centre who live, work and study in South Kilburn: (please  click at the end for the full article which is well worth reading)

Brent Council launched a consultation on its review of the South Kilburn Masterplan Supplementary Planning Document (SPD) in February 2017 which ends on the 30 March 2017. For this consultation the Council released a document over 180 pages long over 3 sections. The people from South Kilburn were given 6 weeks to comment on this document which lays out the plans for their homes, parks, health, education,small businesses, and community services in the area for the next 10 -15 years.

Each site is given 2 A4 pages in the document. The first half of the page gives the details about where the property is with the second half of the same page incorporating a short paragraph about each of these three issues: 'Description', 'Justification' and 'Design Principles'. The second page gives a vague shadow drawing of a huge block or blocks in the place of the current buildings.

There are repeated justifications for redevelopment; that the buildings are poorly built, internal design problems, or poor design and construction. Some of the justifications to tear down buildings are absurd such as "there is a lack of clarity about what is the front or the back of the property" (Crone and Zangwill) or the property "is currently in a prominent gateway position and the current development does not capitalise on this" (William Dunbar and William Saville Houses). Any idea of refurbishment is brushed aside as not viable. On the basis of this paltry and inadequate information people are expected to agree to a massive reconstruction of their lives. The end result is unclear. Certainly this document gives very little information about it. Further, much of the detail about the buildings in the document is inaccurate calling into question the accuracy of the whole document and its legal status.

We, the people of South Kilburn, reject this document for 2 reasons. Firstly, the bad process and secondly, loss of trust in what the Council are doing and why. With regard to the process, the length of the consultation coupled with the importance makes it unable to be agreed in the time period. To read the plans and think what they mean in this the time period is far too short. The vagueness of the document along with the inaccuracies make it virtually meaningless and allow the Council to do anything in South Kilburn, making any idea of a consultation farcical. Most important the vision is not the vision of the people of South Kilburn. It is an imposed vision whose prime purpose is to maximize housing.

This has no long term benefits for the people of South Kilburn nor does it address the council's own aims such as “improved public realm” (Masterplan Consultation Website)  building for health and happiness. In fact it feels that the views are used to justify the decisions the Council wants with those decisions not necessarily in the interests of those who live and work in South Kilburn. They may coincide but they may not.

Secondly, distrust that has built up in area because the document has so many inaccuracies that it is hard to believe the people writing it really knew or were interested in South Kilburn. They could not even spend enough time to make sure they got their facts right. The writing is filled with platitudes and disingenuous statements that skew the reader to the decision the Council would like to see. But they do not show the full picture.

We ask that Brent Council

2. The justifications for the demolition of each building to be  made transparent and public . We do not believe the buildings are not worth fixing and ask to see all the evidence, including costings, for these claims.

The Graville /Carlton Site in Depth
In this initial statement we will be detailing our reply about the Sec 7 Community and other resources and Sec 12 Phase 4 Carlton and Granville sites only.

On page 72 Community spaces are said “many are currently not high quality. “with the public having a low level of awareness of these facilities." The document then goes on to list the 'new community spaces' at 7.2 apparently not well known to the South Kilburn public

Let's look at each of these each in turn:

The Xhamia e Shqiptareve Community and Cultural Centre formerly the Old Shamrock Public House; is a mosque with access limited by faith. It is also very small and not available for many activities (such as a women's exercise group).

The Tabot Centre is an after school club built in 2003 open only after school for people under 16.
The Vale Community Centre was built in 2000 and is open to certain residents, those who can pay, is small and difficult to find out who runs it. opened in 1998(?)

Only St Augustine's Sports Hall finished in about 2012 can be said to in anyway to be 'new'. But it is only accessible to the public after 6pm and only for sports activities

The development of Moberley sports centre (almost a 1 mile) away is also mentioned as a community space for South Kilburn. It cannot be said to be relevant to the people of south Kilburn. It is not a local resource.  Further by ignoring the serious trouble between the young people on South Kilburn estate and those in the Mozart and other Westminster estates (near the Moberley) in the document, shows how out of touch with the reality of life in South Kilburn the council is.

We are highlighting the misinformation in this document to show how trust is lost when these sorts of 'facts' are published. To someone who knows South Kilburn , who lives and works there, it is hard to recognise the place described. To say that people do not know about the facilities in their area and then to list a mosque as one of those facilities is to misconstrue reality. It is vital when such huge decisions are being made on the basis of claims that they are truthful, accurate and clear. Not vague and ambiguous leading the reader to a conclusion consistent with the Council's plans.

With regard to the Granville/Carlton site specifically the SDP says in 7.15 “.Much of the premises are however vacant after Council services have contracted or relocated” Again at Sec 12 p.132 the buildings are "currently under-utilised". This is the main justification for drastically changing these buildings. Noise problems are the current justification for not allowing people to use The Granville Plus Centre even though numerous ways of working this out have been advanced with no movement from the Council. Again this justification is false as the Council refuses to allow the buildings to be used fully. This in turn perpetuates the culture of distrust. It seems the Council do not want to solve this problem because it suits their interests to have an excuse to change the buildings from their present uses.

Under Pple CF1 item 3 says Regeneration of the Carlton and Granville Centres into an Enterprise Hub, Education/ Community Space and Housing; and again at Sec 12 p 132. It says "Non-residential floorspace unquantified as yet and 40 dwellings" on the Granville/Carlton sites The word housing occurs. Where has this come from? When has housing been mentioned as being part of the plan for community facilities or on the site of community facilities?

The diagram for Carlton and Granville shows no new information or more accurately it seems to show the buildings that are there now. Does this mean the Council intends to keep and refurbish these buildings? If so why is this not stated as a possibility in the written paragraph?

In this statement we have examined in detail only 6 pages in a document that is over 180 pages long. How can the community whose lives are centred in and around these buildings be expected to digest such an expansive document, reveal its shortcomings, understand and attend to the implications for the future of these plans for themselves and their children? The process that is called 'consultation' is no more than a tick box exercise of the worst sort. This comes after an explicit commitment by the scrutiny committee to do things differently. This current exercise seems costly and pointless. We do not agree to this document on this issue alone. How can you be assure that silence is a educated agreement?

Lack of information about the Council's plans, misinformation in the consultation document and lack of trust about the Council's motives for the SDP Masterplan review all lead to a rejection of it. This is the impetus for the people of South Kilburn to form our own plan for the area. A plan that starts with those who live, work and study in the area to promote the sustainability of the local community. We are writing that document now-Towards a People's Plan for South Kilburn.

You can find Granville Community Kitchen at
The Granville Plus Centre, Carlton Vale, NW6 5HQ
http://granvillecommunitykitchen.wordpress.com
or  follow us at
@GranComKitchen
Like us on Facbook
Posted by Martin Francis at 15:39:00