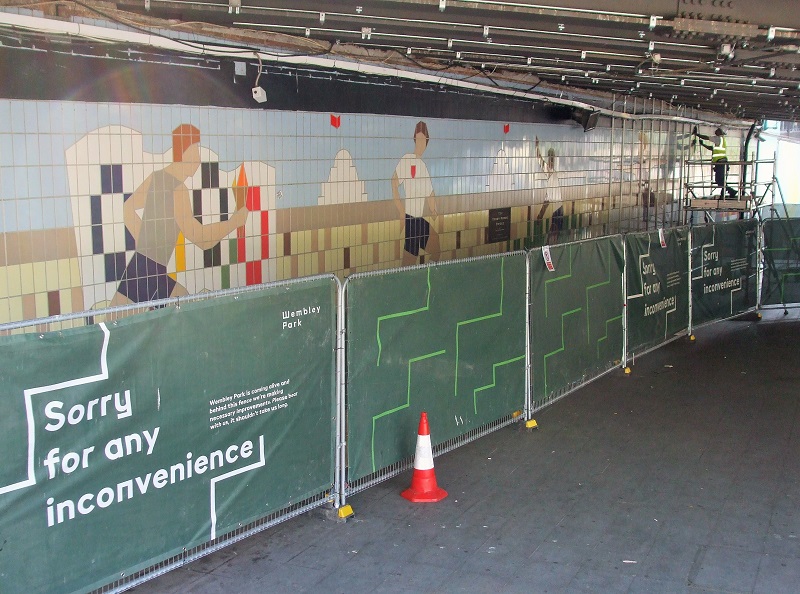 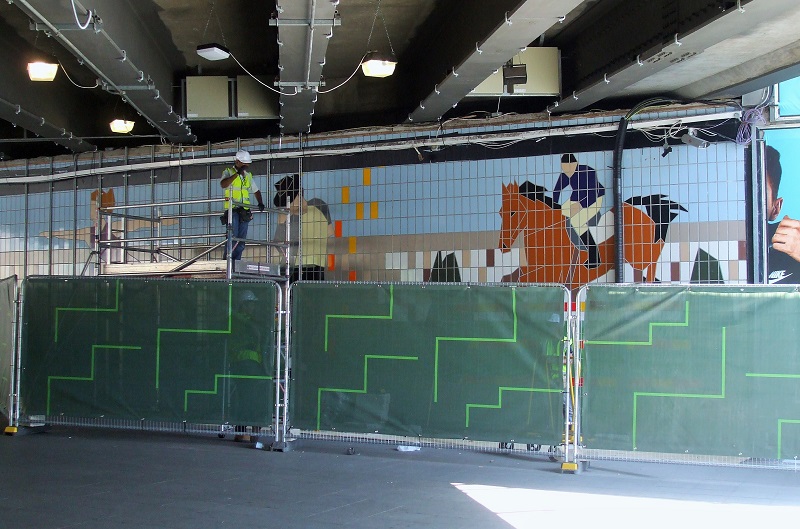 
On Thursday, I saw the tile murals on the east wall of the Bobby Moore Bridge subway, for the first time since they were covered over with vinyl advertisements in October 2013.
Unfortunately, this wasn’t a cause for celebration. Work was in progress which will see all but one of the mural scenes hidden, perhaps permanently, behind illuminated advertising screens, attached to vertical metal struts, screwed into the joints between the tiles.
One of the workmen saw me taking photographs, and asked me if there was a problem. I said that I was sorry to see such a beautiful piece of Wembley Park’s story being covered up, and he replied ‘Yeah. This is history.’ He was right. THIS IS HISTORY, but it should not be “history”.
The heritage importance of the murals was the subject of a blog on 11 June LINK . Despite the evidence they had, Brent’s Planning Officers did not even mention heritage as a key issue in their reports to the Planning Committee meeting on 16 July. Although we tried our best to correct that false impression at the meeting, and explain the heritage and public art value of the tile murals for both residents and visitors, the Planner’s recommendations to approve the Bobby Moore Bridge applications were accepted, by 5 votes to 2 LINK . 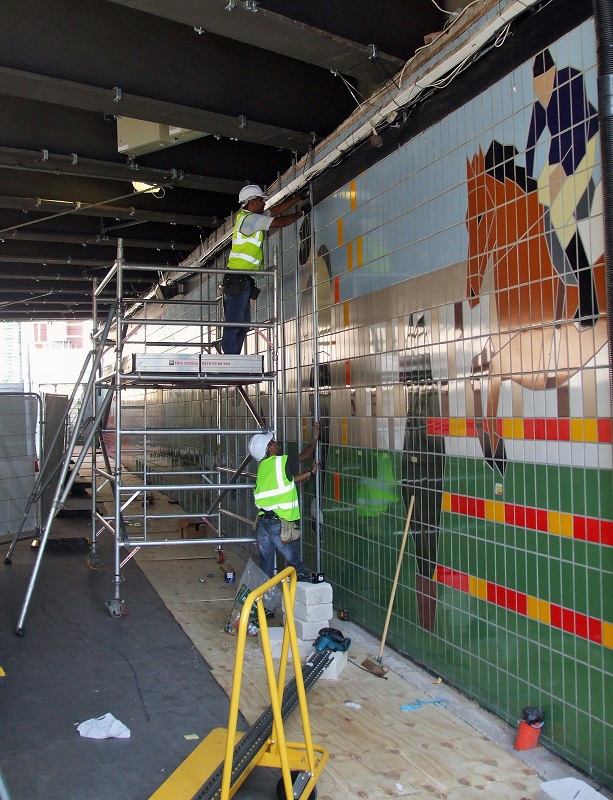 Fixing metal struts over the Michael Jackson mural scene, with the 1948 Olympics show jumping mural next in line.

To be fair, the men I saw fixing the metal struts over the murals in Thursday did seem to be taking care not to damage the tiles. Unfortunately, that does not seem to have been the case with whoever fitted the struts that barriers around their “building site” are attached to, particularly at the southern end of the subway’s west wall:- 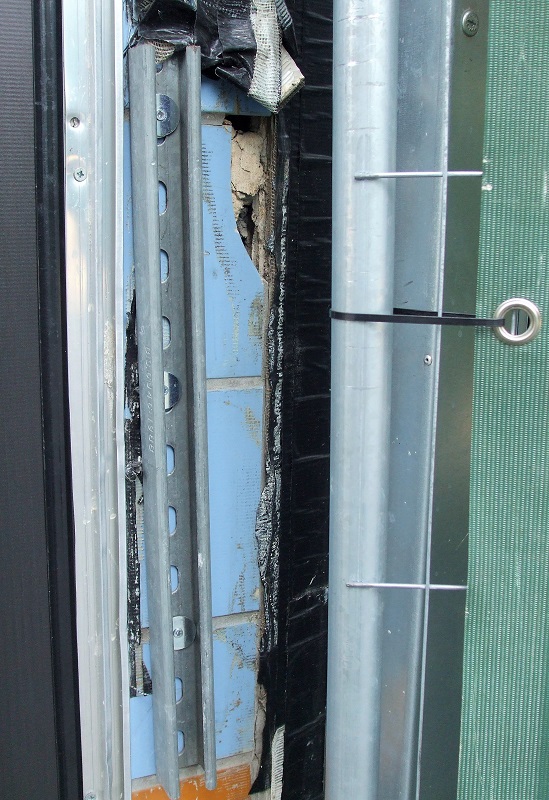 Damaged tiles at the edge of the “Olympic flame” mural scene.

In their “Statement of Significance”, submitted as part of the application documents, Quintain’s agents said:
‘The lightbox panels will be fixed to the walls using screws placed between the tile joints, allowing the tiled mural to remain in situ and unharmed and therefore will not result in any loss or damage to the original mural.’
That statement was unrealistically optimistic, and in an “Addendum” to that document on 1 July, they said:
‘Quintain fully commit to repair any damage that is caused during the installation of the light boxes, should this occur.’ 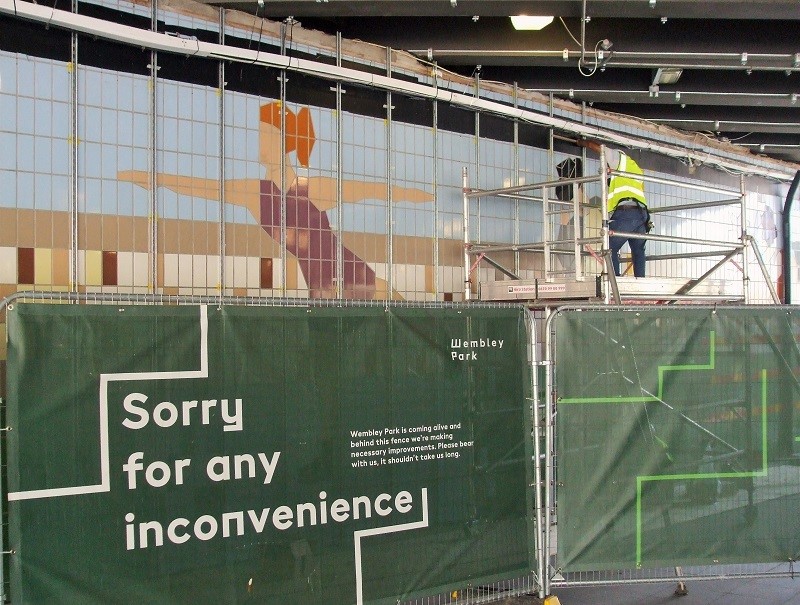 I hope that Brent Council will hold them to that promise.
For now, I would encourage anyone interested in the tile murals to pay a visit to the subway. Remind yourself of what a valuable record, of famous sports and entertainment events at Wembley Stadium and Arena, we are about to lose (thanks to Brent Council’s neglect, and Quintain’s commercial opportunism). Take some photos of your own, and perhaps share them on social media. It may be your last chance.

In case anyone has not realised (from earlier blogs), I will explain my reference to the "work in progress", 'which will see all but one of the mural scenes hidden, perhaps permanently, behind illuminated advertising screens.'

The one mural scene which will be visible, after the work in the subway has finished, is the two footballers, with the twin towers of the old Wembley Stadium in the background, which includes the plaque unveiled by Bobby Moore's widow in 1993.

P.S. - you can see a photo of the mural scene that will now be visible, in an "Update" to this blog, posted on 3 August.