Brent Friends of the Earth fracked off with Barclays Bank 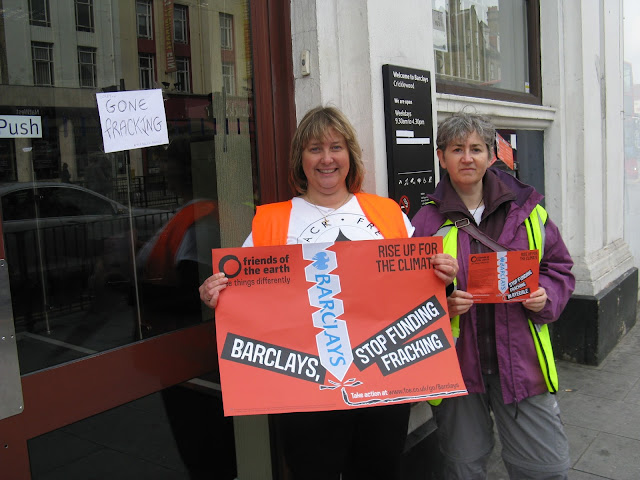 Brent Friends of the Earth members campaigned outside Barclays in Cricklewood on Saturday 10th October to tell the bank to stop backing fracking. The group used placards, bottles of 'fracking water'and leaflets to raise awareness, and a petition to put pressure on the bank over its investment in the dirty fossil fuel extraction in Ryedale, Yorkshire.

Barclays bank owns 97% of Third Energy – a company planning to frack very close to the North York Moors National Park. Barclays has a long history of funding dirty energy, but this would be the first time a major High Street bank is directly investing in fracking in the UK.

Members of the public signed a petition to Barclays' Chairman, John MacFarlane, to withdraw proposals of Third Energy and Barclays Natural Resource Investments to carry out exploratory fracking in North Yorkshire. Fracking in this area of the country carries a wide range of risks including:


-Risks to groundwater from chemicals injected into the ground and extracted as part of the fracking process.
-Risks to surface water, particularly given the area's location in a flood risk area and as an area renowned for its pristine rivers.
-Risks to the community from increased traffic and noise impacting on mental and physical health.
-Risks to the local economy which is largely dependent on agriculture, tourism and fishing.
-Risks to the global climate from further extreme extraction of dirty fossil fuels.

Viv Stein, spokesperson for Brent Friends of the Earth says, “Fracking poses unacceptable risks to our health, homes and environment, and goes against everything we need to do to tackle climate change. Brent residents were concerned to find out that Barclays – a retail bank – is investing in dirty fracking in a beautiful part of our country. We hope that our action, alongside others up and down the country, will persuade the bank to stop their plans which gamble with our health and the environment.”

“Our dirty 'frack water' highlighted concerns that the extraction uses vast quantities of water, making it no longer safe to drink. Surprisingly the Cricklewood branch was closed on the day of our action. We had hoped to meet the Bank Manager and express our concerns.”

Brent Friends of the Earth's actions were part of a national day of action on Climate Change on 10th October. See what other groups did on Twitter at #StopBarclaysFracking. To sign the petition to Barclays go to https://www.foe.co.uk/act/tell-barclays-stop-fracking-north-yorkshire.
Posted by Martin Francis at 13:17:00