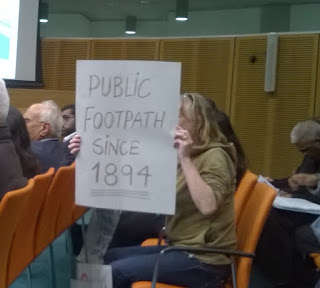 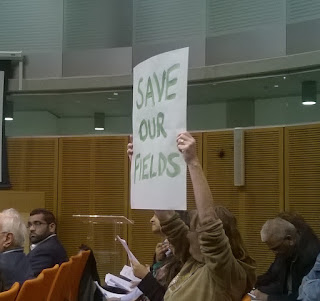 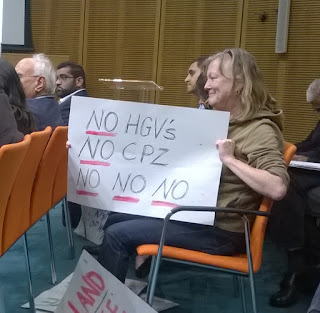 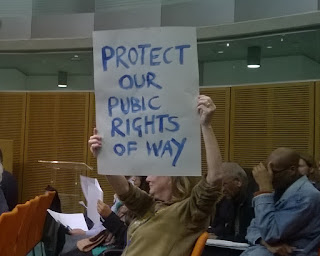 The Committee voted unanimously to approve the school the Chair, Cllr Sarah Marquis, accepted legal advice that they could not consider the Right of Way issue. She noted that residents might want to take up the issue under the Highways Act.

Raphael Moss, headteacher of the newly expanded Elsley Primary School spoke in favour of the new build and changes to the playing fields and raised issues about the safeguarding of children under current public access conditions.

A speaker from the Education Funding Agency Priority Building Programme poo pooed residents claims that they had had access to the fields as public land for decades, asserting (without any factual evidence cited) that they were 'incorrect'. In a threatening tone he warned the councillors that if they did not approve the plans the £26.5m earmarked for the new build might be lost. Responding to Cllr Colacicco who asked why green measures were always the last thing to be considered in such projects he said that such measures would require funding in addition to the £26.5m and a planning officer said that there was future proofing in the plans that meant they might be added later.

Speaker as a Wembley Central ward councillor, Cllr Sam Stopp, said he wasn't against a new school build replacing the dilapidated building (altholugh against academies on principle) but expressed concern that Muhammed Butt, the Leader of Brent Council had been consulted but not residents.

Cllr Mitchell Murray said that she was concerned about the lack of respect for local resients shown during the consultation and remarked that the Council had not made a good job of the consultation.

Cllr Stopp has blogged on the issue HERE

The comment on Butt reflects disquiet I have heard is prevalent among both officers and councillors about what could be construed as improper conduct. As the Planning Committee is statutorily independent the Cabinet, and even more importantly the Leader, is not supposed to try and influence its decisions.

Butt not only went to the site (see above) and talked with residents after the Planning Committee was made its site visit last Saturday, but then misrepresented the residents' views in a widely distributed email. He clearly has an interest not only as a proponent of the scheme in the Cabinet, but also as a governor at Ark Elvin and parent of a pupil attending the school.

Councillors on the Planning Committee could have been left in no doubt about what the 'Leader' wanted. They even referred to the fact that he had promised to write to the residents about their concerns during the meeting.

Perhaps something for Standards Commitee as well as Scrutiny?

Maybe white knight Philip Grant should refer this to standards...

Well done Janie on getting your placards into the meeting although you have guarenteed now that you'll be searched as soon as you set foot in there in future (take it from one who knows!)

It does not have to be Philip Grant who asks for matters to be referred to Standards Committee!

You, or any other Brent resident, can do so, if you believe (in good faith) that Brent's Members' Code of Conduct has been breached. It is a right given to Brent's citizens under the Council's Constitution:-

Under Article 3.1(d)(iii) of Brent's Constitution:

'Citizens have the right to complain to:

(iii) the Monitoring Officer about a breach by any members or voting co-opted members of the Brent Members’ Code of Conduct.'

The Monitoring Officer (who should then refer any allegations of breaches of the Members' Code of Conduct to Brent's Standards Committee) is the Council's Chief Legal Officer, Fiona Alderman, who can be contacted at: fiona.alderman@brent.gov.uk .