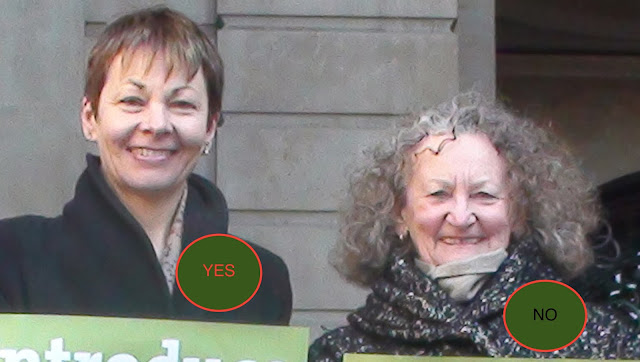 It was announced yesterday that Green MP Caroline Lucas is joining the board of the EU 'In' campaign. This came shortly after it was reported on Friday that  Green peer and retiring London Assembly member Jenny Jones was supporting the 'Leave' campaign.  Jones' position is not new as she wrote an article on the case for withdrawal back in July LINK

The Green Party's current official position is the 'Three Yeses' : Yes to a referendum, yes to reform, yes to staying in the EU with more detail in an Emergency Motion passed at Autumn Conference (added at end of article). The crux of the matter for some Green Party members is whether a failure to reform (or a worsening of the social benefits after Cameron's negotiations) should convert into a 'No to the EU'.  The treatment of Greece, TTIP and perceived failures over the refugee issue are key elements in the current debate.

As with the last EU referendum and the Scottish referendum people on either side of the debate can find themselves with some strange bedfellows - agreeing the ultimate aim of staying in or withdrawal but for very different reasons.

This is an extract from Jones' article in the Ecologist:
HERE