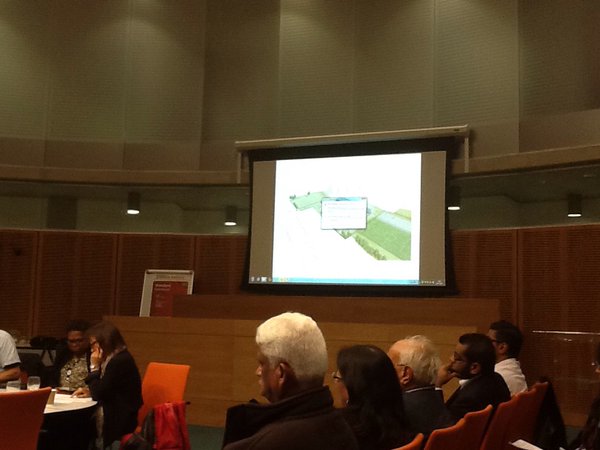 The slide of the artists' impression of the new Ark Elvin school building had pride of place at the Planning Committee tonight and the green space looked impressive - especially the bit fronting the High Road, although maybe it was a different shade of green so that might be a clue.

It soon unravelled under questioning. It was going to be a temporary space pending redevelopment, although at first officers were vague about how long it would last. Then it emerged (as reported on Wembley Matters) that it would be a mixed development (in Brent this means shops and flats).

When Cllr Maurice suggested that a condition be put on the Planning Application that it should remain a green space, Steve Weeks, Head of Planning, came clean and said that couldn't be done because it would be contrary to the existing Wembley Area Plan, which of course sees retails stretching from Wembley Central station all the way down the High Road to the LDO.

However, the Planning Committee were told that they had to consider the Ark Elvin planning application separately from any plans for the High Road frontage.  Clearly any applications for the development of the space will be considered in the light of the Area Plan. Basically the new school will be hidden away, probably behind blocks of flats with retail on the ground floor.

It was also confirmed that Jesmond Road residents can't be spared construction traffic by  alternative access to the school site via Brent House, because the Council are on the verge of reaching a deal with developers on that site.
Posted by Martin Francis at 22:31:00

Forgive me, I've been out of the country, but I'm a bit confused.
I know that Brent Council has got a massive majority for one party, but is it Labour or Conservative? And how would I tell the difference?
Also, what is the appeal of Jeremy Corbyn exactly?

The real question is

Would the school be better built in a different location closer to catchment area of Harlesden?

The Real problem in building a school now on Copland site is that a high percentage of Copland intake are drawn from Harlesden area.

Wembley needs a connection from Old Oak Common and the Copland Site should be used as a strategic asset to deliver such an opportunity.

Yes Brent needs new schools but it also needs a better vision than what is being offered.

Working with London Mayor in immediately earmarking a school site in the Old Oak Common Development Corporation will deliver schools where they are needed.

If for example towards the east of Wembley stadium there was a new train station a new school could be developed in the future in this area that would deliver the needed future school places.

Come on Wembley reject the current plans as it simply will cause more congestion in Wembley as young people would have to travel from Harlesden to Wembley to attend the proposed redeveloped Copland site.