Corbyn and Council Cuts: Time for a united resistance? 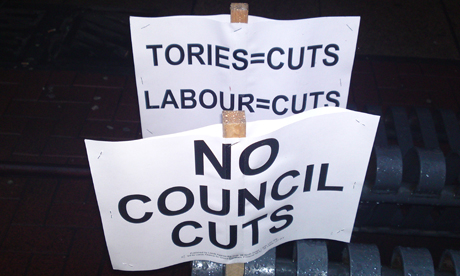 Local councils are currently drawing up their budgets for 2016-17 with the accompanying cuts to accommodate the cuts in local government funding. Council leaders across the political spectrum have warned that these are cuts too far and will have a devastating impact on core services.

The budgets are often part of a 3 or 4 year plan started a year or two ago. Labour councils (and the defeated Green minority council in Brighton) have used the 'dented shield' argument that only they can make the chocies that will preserve vital services.  This looks increasingly weak as the cuts accumulate and the poor are hit.

Since those cuts were projected in budgets the political situation has changed. On the one hand the Tories are back in power but on the other hand Jeremy Corbyn has won the leadership on an anti-austerity ticket with a surge of support, often from local activists involved in housing, NHS and cuts campaigns.

The run up to local and the London Mayoral and GLA elections will be accompanied by local press stories on the council cuts and their impact on vulnerable adult care, children's social services, provision for children with special education needs, local libraries and youth provision.

There has been a silence from the new Labour shadow cabinet on this so far but the call for resistance and a strong campaign based on local activists and public sector unions that was made under the last Labour leadership by the left must surely be repeated with added urgency now?

I have raised this issue in Green Party circles with a varied response. Some have shrugged and said, 'What else can local councils do?' and suggested we concentrate on the source of the cuts - the Tories and their ideology - emphasising that there is no need for the cuts but it is a choice that the Conservatives have made: Councils have no choice. This leaves us with divisive debates about exactly where the cuts will fall.

Others see the Corbyn phenomenon and the various broad alliances proposed (Momentum, Red Pepper circles etc) as well as the People's Assembly and trade unions as an opportunity to build a massive resistance.

What advice will Corbyn give local coucils?

I publish below a response I received about this from a Green Party activist:

I agree that we have to draw attention to the inconsistency between having an "anti-austerity" policy position, whilst being forced to implement austerity cuts locally, which are once again directed at the most vulnerable, in a deliberately discriminatory and disproportionate manner.

e.g. Disability groups have been calling for a 'Cumulative Impact Assessment' (CIA) to asess what the cumulative effects are, of 'multiple cuts' to different services and benefits, on those who (being the most vulnerable) rely on a range of different benefits and services. There are assessments of each individual cut, but no asessment of those who are subjected to multiple cuts over time. This has been requested repeatedly for several years now, and the Government/DWP still refuses to do it. Meanwhile, there has been a rise in the death-toll of vulnerable people, and those people deserve not to die unacknowledged, while their 'deaths' were a deliberate 'colateral-damage' decision, which was made by Tory 'policy-makers'.

"The United Nations is carrying out an unprecedented inquiry into “systematic and grave violations” of disabled people’s human rights by the UK government"
http://www.disabilitynewsservice.com/confirmed-un-is-investigating-uks-grave-violations-of-disabled-peoples-rights/

We need to be behind this move by the UN and seen to be showing solidarity with anti-austerity disabled rights groups around the country, who have been on the receiving end of these deliberately 'Targeted' cuts for 5 years already. Cuts which have potentially contributed to thousands of deaths.

Either Labour are going to be an opposition thorn in this sociopathic government's side, or they are going to continue with the Neoliberal narrative that 'economics' makes it all inevitable because... money, family purse, budget... mixing macro-economics with family economics like the Tories always do, and confusing people's perceptions of how 'money/debt' is created (while the Tories have doubled the 'debt' and handed the 'money' to their old-school corporate chums). The Green Party has a new and important policy around money-creation, and this is also a big opportunity for Greens to push that & to explain it to the public, so as to dispell the 40 year old Thatcherite meme of a family purse budget.

A Green New Deal is beneficial socially, economically and environmentally. It ticks all the boxes as the alternative to 'austerity'. A nation-wide renewable energy and energy efficiency programme (managed at the 'Local' level), coupled to electrification of transport (which would require offshore wind wave tidal development), would be a massive (but increasingly urgent) undertaking, which would both improve 'quality-of-life' for people locally, as well as mitigate some of the damage we're doing to the environment. Voters need to know that the Tory government are letting Britain be left behind in the new global renewable energy industry, which has massive social & economic benefits if encouraged to prosper.

One of Thatcher's biggest crimes, was not investing North Sea oil tax revenues in the renewable energy technologies which were available at the time, like on/offshore wind power, and solar water heaters & insulation for homes etc etc. The 'jobs' thus created could have replaced the coal jobs lost, instead of throwing tens of thousands into unemployment, with no new jobs to go to. Those new sustainable jobs are still screaming out to be created. Austerity is a lie. It is the diversion of Public money into Private offshore accounts without the 'societal' benefits that should come from creating that money.

But let's not forget there are powerful neoliberal forces in Labour still. The first Bail-Out was under Brown and that alone was enough to pay off every single mortgage in the UK at the time. Those people haven't just gone away because Corbyn became 'Leader' and there hasn't been a huge shift in policy position by the Parliamentary Labour Party as far as I can tell - so far.