Save the Wildlife Garden at the Natural History Museum 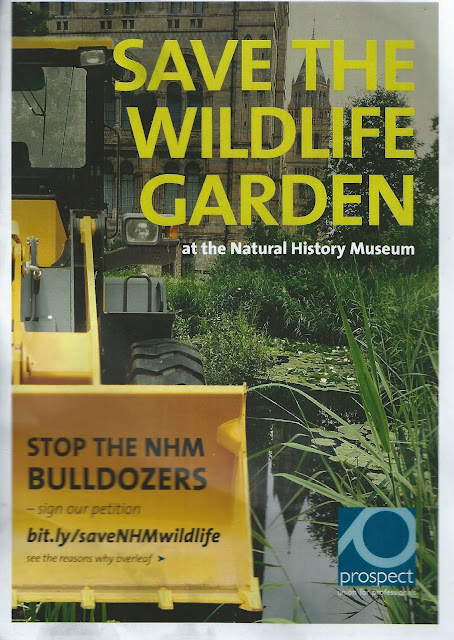 Prospect ('The Union for Professionals'*) has launched a petition to save th wildlife garden at the Natural History Museum in London.

The petition can be found HERE

This was the briefing Prpespect published in August


As the Natural History Museum’s unique urban wildlife garden celebrates its 20th anniversary it faces seeing more than half of its dozen or so individual habitats lost or uprooted under plans for a multi-million pound revamp of the institution’s grounds.
Prospect, which represents specialists at the museum, welcomes plans to transform the “sterile” lawn frontage to recreate historic British habitats, including a Jurassic area, which will see the return of the much-loved “Dippy” dinosaur cast.
However, the architect-led plans for the compact one-acre wildlife garden on the west side of the building propose what amounts to a metres-wide driveway arcing right through the middle, where visitors currently enjoy its iconic central pond, associated wetlands and other threatened habitats including heathland and meadow.

Responding to the plans, Prospect negotiator Mike Weiler said: “The wildlife garden was established by a team of scientists and ecologists 20 years ago, to illustrate the diversity of lowland habitat in the UK, many of which people – especially city dwellers – will never have seen. Many of the life scientists are still very much involved with the garden, which is managed by ecologists and a group of 30 dedicated volunteers.

“The plans that we have seen seem to be all about efficiently channelling large numbers of people through the garden towards the Darwin Centre and the other museum buildings, rather than enhancing the wildlife or encouraging any interaction. They could be easily modified to utilise the existing bricked pathways that run around the perimeter, to minimise disruption.
“In their existing form the plans will see the large pond filled in and replaced with a circular pool.

One small pond will be destroyed while another will remain. The museum’s answer to many of our current concerns seems to be ‘translocation’, to use the technical term – in other words digging up habitats and moving them. The academic literature gives a mixed review at best on the success of this process.

“The Wildlife Garden has evolved over two decades. It can’t be replaced overnight. It has taken many years to build up the 2,600 species of plant and animal life that can now be found there and careful management and dedication is required to maintain each distinct habitat.”

The garden was established in part with a £50,000 grant from English Nature (now part of Natural England), the largest ever made by the agency at the time. It is the only area of the grounds that currently nurtures natural history and plays a vital role in both education and research. It attracts thousands of school children annually, many of whom attend museum-led workshops, as well as charting local climate change impacts by recording the annual variations in flowering times of plants.

Despite all this the museum complains of low visitor numbers, though a gate linking the lawn and garden is now permanently locked and the only way to access it is by passing through the busiest parts of the museum building. Even then, there is a complete absence of signage inside the museum.
Journalist Kate Bradbury recently toured the garden and was enchanted. In an article for the Telegraph to mark the garden’s 20th anniversary, she described it as a “Narnia...bursting with adventure.”

Mike Weiler added: “The simple fact is that if the garden was better advertised it would be a magnet for visitors seeking a calm oasis of nature just a stone’s throw from the hustle and bustle of Cromwell Road.”

Despite its concerns about the museum’s ill-considered plans, the Prospect branch at the NHM is keen to embrace change for the better and is floating the idea of a raised walkway to attract greater visitor numbers without disrupting the garden.

“Those who run the gardens have always been keen to embrace new ideas and technology to improve the visitor experience. The use of webcams to reveal the secret life of bees, birds and bats has been a recent example of this and there is considerable scope to make use of advances in camera technology,” said Weiler.

A recent “town hall”-style staff meeting at the museum showed high levels of opposition to the current plans and Prospect is now seeking urgent, meaningful talks ahead of any attempt to seek planning permission.

* Declaration of interest. I am a member of Prospect in my role at Brent School Without Walls which provides nature walks for primary children in Fryent Country Park.
Posted by Martin Francis at 17:23:00

thanks for informing us about this

4 bat species have been found in garden, what now?

So 4 species of bats have been found in NHM garden what happens now? they are protected by law.