Brent comes together to challenge the Trade Union Bill 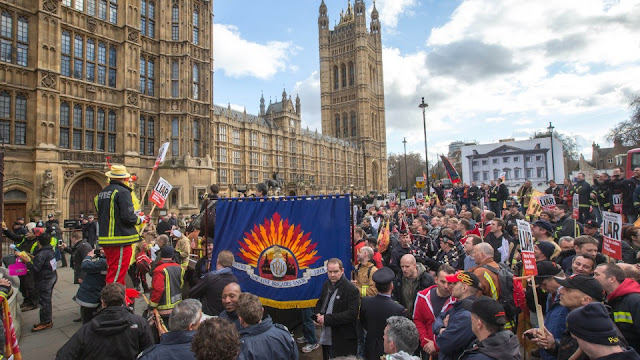 This is what Green Party leader Natalie Bennett said on the issue on Huffington Post back in July:

The government last week set out its proposals to further reduce the rights of our trade unions, already labouring under the most restrictive laws in Europe, to cut away at rights that the Tolpuddle martyrs, who were being commemorated over the weekend, fought so hard for in the 19th Century.
These plans are dreadful, and must be fought tooth and nail, which the Green Party will be doing. And so will many others, I believe, with a swell of support already evident around the country. The strong support for TUC leader Frances O'Grady from the BBC Any Questions audience on Friday (17 July) night was encouraging.

But in raising this debate, the government is also opening up an opportunity - a chance for a debate about what unions are for, how important they are to economic stability and to an effective, productive economy and safe workplaces - a chance in short to argue for the reverse proposal, to call for the strengthening of the power and influence of unions, for the benefit of our economy, society and environment.

This debate is also a chance to tackle lazy stereotypes about unions so often promulgated by the right-wing media about "extremism", and "greed". The sort of stereotypes that the government wants to perpetuate, yet don't reflect the experiences of communities around Britain.

And it is a chance to highlight - as the Blacklist Support Group campaign has been doing - how even legal union activities and essential whistleblowing has not been protected by the state but instead been illegally repressed and spied upon by the authorities, a misuse of power reflected in the behaviour of undercover police operating against the environmental movement.

The debate comes at a time when we are seeing a resurgence in union activity, a growth in new areas - and when - perhaps most usefully of all in campaigning terms - Chancellor George Osborne has left some real chinks in his armour in his portrayal of the state of our low wage economy.

For even the Chancellor has identified low wages as a problem, and is calling for businesses to pay their workers more - £9 an hour by 2020. (The Green Party in the recent election was calling for £10 by 2020, and that had a lot of Tories I was debating with spluttering.) Osborne's acknowledged that the minimum wage should be a living wage, that workers should be paid enough money to live on, even if what he's proposing isn't really a living wage.

He's saying this at a time when organisations as apparently unlikely as the IMF and the World Bank are acknowledging that economic inequality, the rising wealth of the 1% while the rest of us get poorer, is a threat to future economic stability.

And the Chancellor is calling for a big rise in the productivity of our economy, up towards German levels - in the very economy where unions have far more legal powers and rights, where their partnership with management is seen as essential in the levels of productivity that have proved so elusive in Britain.

Further, the government proposals come at a time when the need for health and safety in the workplace - the maintenance of which is an important role that unions can play when corner-cutting management fails to live up to its responsibilities - is being dreadfully demonstrated.

There have been far too many horrific workplace incidents recently: in the last few days two factory explosions left six dead, the horrific death of a Crossrail construction worker under tonnes of concrete, the tragic death of an inexperienced young worker on the Crick Institute beside St Pancras station.

That calls into question the government's slashing of health and safety provision, but strong unions could help to stand up for worker protection. No worker should die as a result of safety lapses anywhere, but particularly here in Britain, an advanced, wealthy economy that has the capacity to ensure safety. As the Hazards at Work campaign says, "Better red tape than red bandages".

It's clear that a healthy society, an economically stable and balanced society, needs strong unions. This government has given us a chance to put that case, and it is time to do it loudly and clearly.
Posted by Martin Francis at 11:00:00