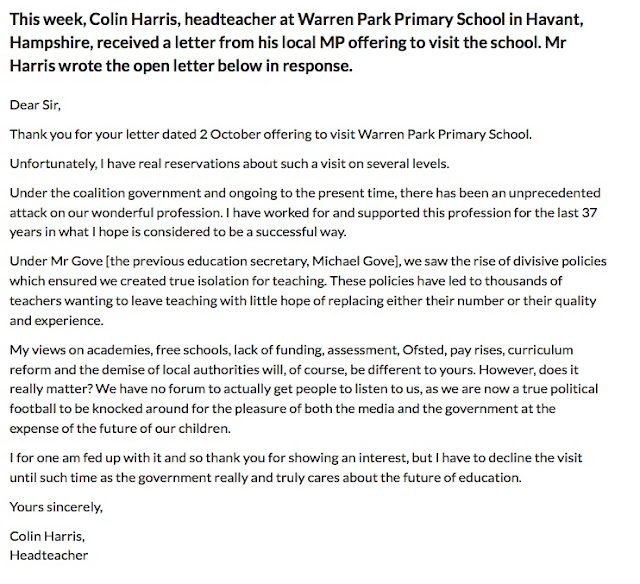 I tweeted the above open letter, first published in the TES, yesterday on both @WembleyMatters and @GreenEdPolicy and it has been retweeted many time, including by the writer and broadcaster Michael Rosen. The letter clearly resonates at a time when many teachers are leaving the profession.


On the Guardian thread about teacher shortages and how they could possibly have come about, I posted some government policies to keep teaching recruitment and retention down:

1. Encourage the press to run stories saying that teachers are lazy and that there are thousands of bad ones.
2. Get the head of Ofsted to say the same.
3. Keep this up for decades. (both main parties)
4. Bring in hundreds of measuring and assessment systems, levels, targets, tests, exams, which then breed more 'rehearsal' tests and exams.
5. Bring in a punitive, rapid, unsupportive inspection system which ignores the fact that scores are attached to children so that if you're in a school where there has been turnover the inspectorate say that has nothing to do with us.
6. Run a new kind of school where the salaries of management are not open to public scrutiny.
7. Allow interest groups to open schools which take on proportionally fewer SEN, EAL and FSM pupils than nearby LA schools.
8 Allow covert selection and exclusion process to take place around these new kinds of schools because the LA schools have to pick up the pieces.
9. Use international data as if it is holy writ and ignore evidence that suggests that comparing countries does not compare like with like, that some countries which are 'top' are selecting. Obscure the differences between the countries by only talking about 'places' in the table, without ever making clear whether these differences are 'significant' or not.
10. Use China as an example of utopia in education without making a comparison between the two societies - as if education exists separately from the societies that produce the respective education systems.
11. Make sure that very nearly all the people running the state education system from government have no, or very little, state education experience themselves.

Yesterday, Kevin Courtney (who also retweeted the letter as @cyclingkev ) Deputy General Secretary of the NUT spoke at the London Green Party Annual General Meeting on 'Fighting for the Education our young people deserve.' This is an extract from his speech that was delivered with as much passion as demonstrated by Colin Harris and Michael Rosen.

Things have got to change if our education system is to survice as fit for purpose.

Don’t worry, our kids’ education is in safe hands. As some councils attempt to achieve economies of scale by building new 16 form entry schools with 2000+ pupils, the schools minister Nick Gibbs last week attempted to justify the situation by saying: “If you look at Shanghai, their schools are very large and they produce some very high standards of education." Smart logic, eh? Presumably the Scottish rugby team will be eating sushi all next week so they can beat South Africa like the Japan team did. Still, I suppose that if we're going to 'work like the Chinese' (Hunt, if you'll pardon the expression) then we'd better be educated like them. To be fair, the dim Nick Gibbs did then add that "The danger of creating schools too large is they may struggle to attract parents’. No shit, Sherlock! That’s the trouble with these pleb parents: not ready to embrace change.
Still, the Tories themselves obviously now realise the benefits of mega schools and we can look forward to Harrow council having to grant planning permission for a massive extension of Harrow School’s accommodation blocks any time soon.

Mike Hine
BTW what happened to us all becoming Finns?

What Michael Rosen has written regarding defaming teachers has parallels with how 'benefit claimants' have been treated under successive governments.

Government ministers and their lobbyist 'advisers' misrepresent causes of problems and also twist circumstances so that poor people are screwed. One such measure 11 years ago was when Health Minister Lord Warner misrepresented 900 Disability Living Allowance claimants whose DLA entitlement stemmed from their obesity as 900,000 DLA claimants who were obese. Of course he later apologised for 'an adminstrative error', but consider media priorities of 'big bang' over accuracy. Minister cuts the fat from figures

I could go on and on with such instances that have given rise to Briiain's secret penal system [benefit sanctions], and abolition of
• Independent Living Fund and
• Working Tax Credits.

But while it is less easy for people with few 'transferable' skills to walk away from dependence on state benefits, I know that Wembley Matters readers tend to be more enlightened than the readership that mass market right wing gutter press 'enemies without and within' headlines are spoon fed to. So I would encourage Wembley Matters readers to question the premises on which Iain Duncan Smith etc make the case for the 'need' for the 'reforms' that they are driving through Parliament.

A prime case I have in mind is when IDS talks about 'households that have never worked'. My insights as
• someone whose backlog of 'unemployment' since November 1977 is far greater than my prior 5 years of full-time waged employment in which I was regularly scapegoated on account of my disability; and
• a former part-time domiciliary care worker who legitimately signed on for top-up to fluctuating earnings that were less than Jobseekers Allowance levels

lead me to ponder these questions:
1. How many of the 'households in which no-one has ever worked' were/are single person households, and how many such 'households' in a world of 'escape to the country' home owner TV programmes have been made single person households as a result of family breakdown arising from death of a parent and/or marital break-up?
2. How many of the '1.4 million people [that] had been on benefits for most of the previous decade' had been genuine jobseekers serially let down by pre-2010 budget cuts that led them to be, say, taken on as cheap labour on 'traineeships' laying cable and then spat out again onto the dole queue in a revolving doors situation of government-funded slavery?
3. How many of the 'close to half of all households in the social rented sector [who] had no one in work' were in social housing on account of their vulnerability?
4. Is Iain Duncan Smith the kind of 'leader' who uses his intelligence to manipulate others rather than listen to them enough to care about the deaths of benefit claimants under suspicious circumstances related to sanctions?