A  local family  took action yesterday in support of the London Parklets campaign asking for the right for residents of the capital to create small green and socialising spaces on their street. A contrast to all those fuming motorists queueing for petrol over the weekend!

A small table, three chairs, a tomato planter and a houseplant : that's all it took last Sunday afternoon for a Harlesden family to create a parklet on a space normally used for car parking.

For two hours, Amandine Alexandre-Hughes, her husband, Ben and their 4 year old son, Barnaby, invited neighbours and friends to come and have a cup of tea and a biscuit in their temporary parklet. 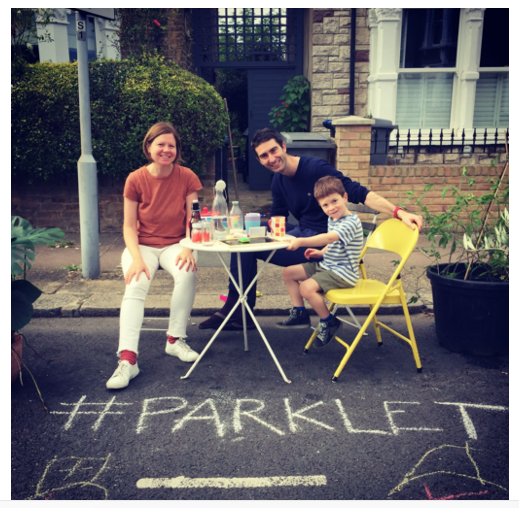 Amandine Alexandre-Hughes, Ben Hughes and their son on September 26th.

The family is asking for the right to create a permanent  parklet outside their house.

“We grabbed the opportunity of The People Parking Day, created by London Parklets Campaign, to catch up with neighbours whom we had not talked to properly in a long time”, Amandine told us.

“We also received very positive feedback from passersby. It’s not surprising considering the obvious benefits of parklets. They create a space for spontaneous and friendly interactions between people. Those do not happen otherwise because our streets are dominated by cars, that cause noise and are a major source of air pollution”, adds the parklet enthusiast who is also a clean air campaigner.

“Although half of Harlesden residents don’t own a car, the neighbourhood is dominated by them. Also, green spaces are few and far between in our area and trees are sparse. We desperately need parklets”, insists Amandine Alexandre-Hughes, a Clean Air ambassador for Harlesden Neighbourhood Forum and Mums for Lungs activist.

Among the people who enjoyed the pop-up parklet created by the Alexandre-Hughes family on Brownlow road was fellow Harlesden resident Mary Mitchell and her youngest daughter.

“I was delighted to have the opportunity to chat with other neighbours, drink tea, and bring some greenery to the realm. More thought-provoking acts of reclamation like this are necessary to bring about a cleaner, healthier, and happier community in our local areas”, Mary said.

On top of being community-friendly, People Parking Day organisers highlight the fact that parklets can help address the climate crisis by increasing biodiversity, breaking up heat islands and providing extra storm drainage.

Campaigners are calling on the London mayor, Sadiq Khan, and borough leaders to allow residents to apply to create parklets in the streets where they live, with an aim to have one on every road in the capital.