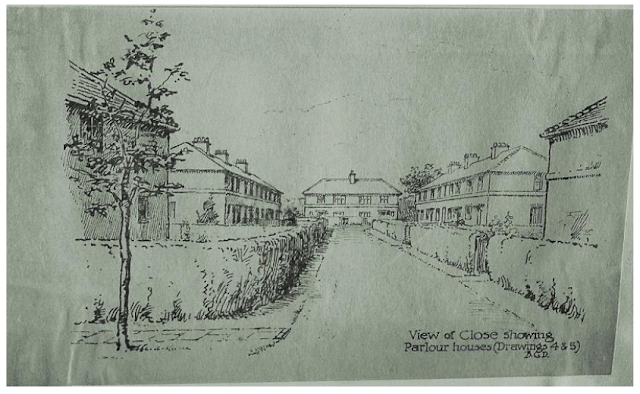 Illustration from booklet celebrating the Brentfield Housing Scheme - June 11th 2021 LINK
An obscure Brent Council document LINK on the Council's Local Plan  piublished in June reveals plans for high rise development on part of the Brentfield Estate. I declare an interest as a former teacher at Brentfield Primary School who became familiar with the estate and its families living in low density homes with gardens and a sense of community
Their homes had been built in the wake of the First World War concerns about the poor health of working class recruits stemming from poor housing conditions. In a campaign which became known as 'Homes Fit for Heroes' local councils would build homes for those living in such conditions.
Willesden District Council planned their first Council Estate of homes for heroes and celebrated the handing over of the first homes to their tenants with a grand opening and a booklet written by the Council's Engineer and Surveyor. LINK 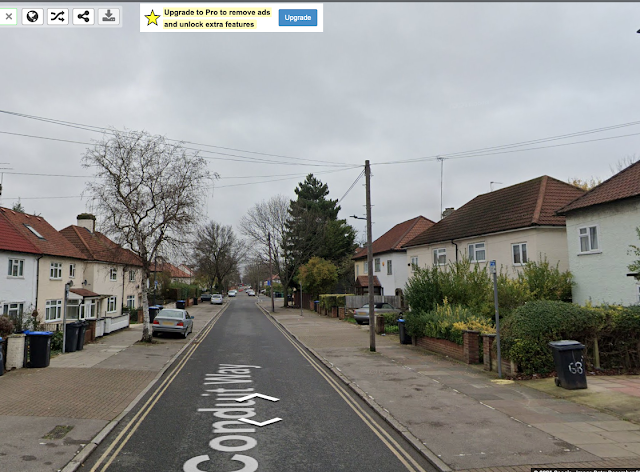 Conduit Way now (Instant Street View)
Now 100 years later, almost to the day, those same homes have been described as of 'low quality' by Brent Council and some designated as suitable for high density tall buildings - which will probably comes as a surprise to existing tenants. This comes in the wake of the redevelopment of the Stonebridge Estates on the other side of the Harrow Road which saw high rise blocks demolished.
In a sort of domino effect in reverse, Brent Council justify the building of tall buildings here because of proposed tall buildings on the Bridge Park and Unisys sites. This designation is just part of the Brentfield estate but one can see that the same justification could be deployed at a later date for other areas with the proximity of the redeveloped tall buildings used as a justification. The open space on the other side of the North Circular may also be affected with the proposed tall building at Stonebridge station setting a precedent for the area.

For Stonebridge Park an additional area adjacent to the site allocation BSSA7 Bridge Park and Unisys Building has been identified. This incorporates the Conduit Way estate. This extension is justified on the basis that the existing estate is of low density, lower quality homes which has the potential to be intensified to a higher density reflective of its higher public transport accessibility. This is particularly so along and in the areas adjacent to the Brentfield frontage. This will complement the taller buildings proposed on the Unisys and Bridge Park site and reinforce the gateway role from the North Circular of those entering the borough from further afield.

An accompanying map shows the proposed change to the 'tall building' area: 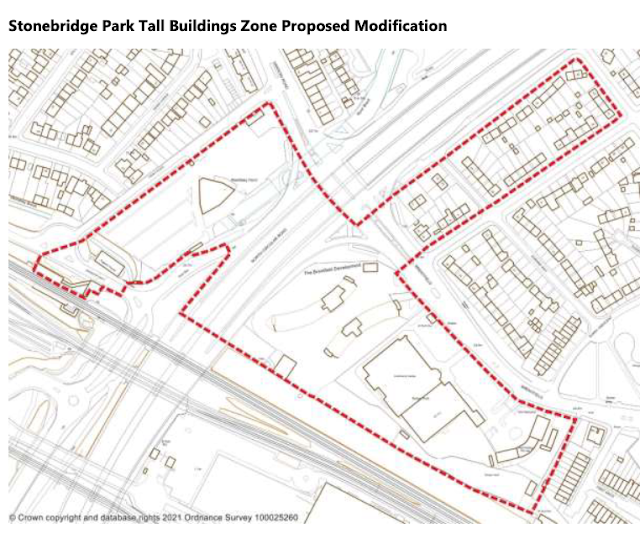 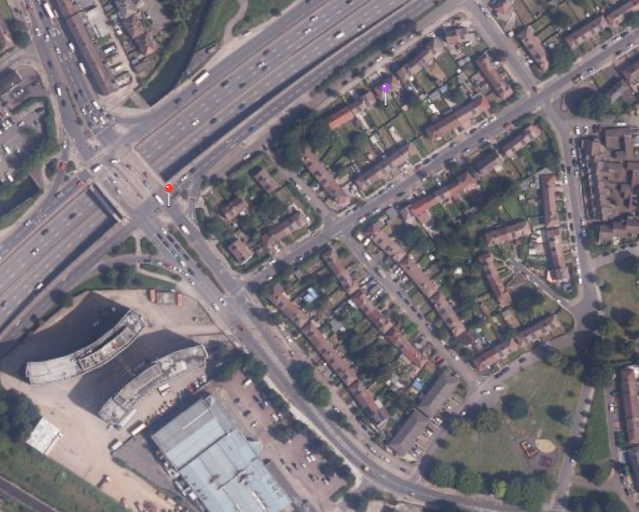 The proximity to other tall buildings is also used to redraw the tall building zones for Wembley Central and Kilburn Square. 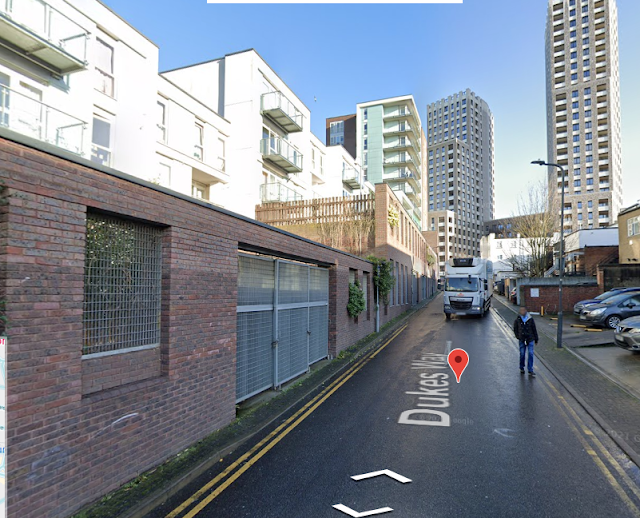 At Wembley Central the 'Twin Towers' on the site of Chesterfield House provides the justification for the extension of the tall building zone as well as an existing building. In this case the proposal is for additional floors to be added to the existing buildings:

For Wembley Central Area B, an additional area north of Duke’s Way has been included. This is a council housing block. This area has already been developed for a tall building at King Edward Court (11 storeys plus lower ground floor). As such its inclusion is justified in part on this basis to correctly reflect the current situation of a tall building being there. In addition, this block has also been identified as potentially being able to accommodate additional upper floors, in part taking account of the opportunity afforded by the adjacent taller Uncle building. 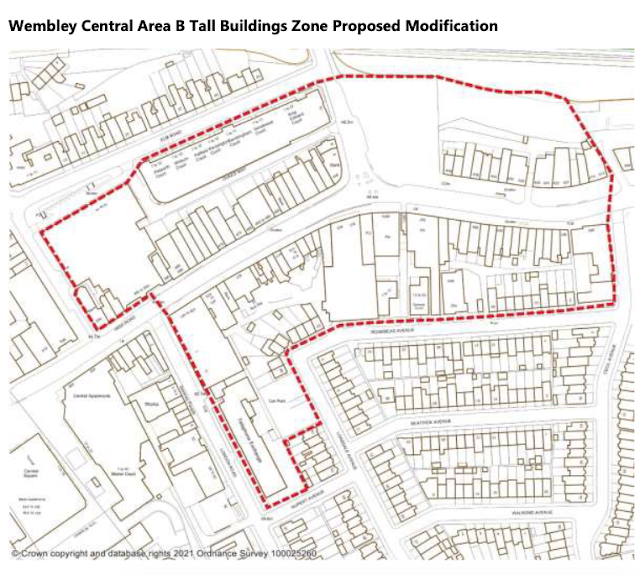 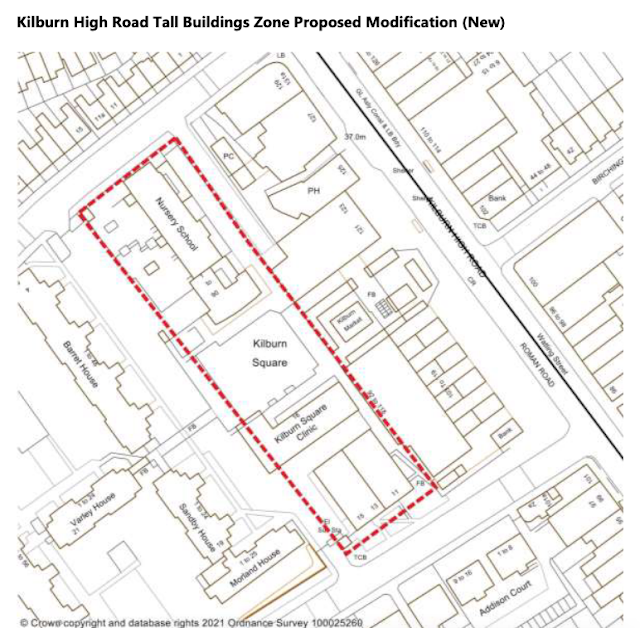 The Kilburn Square controversy has already been covered on Wembley Matters LINK but it is worth recording Brent Council's justification here:

Subsequent to the submission of the draft Local Plan more work has been undertaken by the Council as the owner of the estate in testing delivery options. As a result of this a tall building is being proposed adjacent to the Kilburn Square open space. The tenants of the estate have been consulted as have the local neighbourhood forum. As the existing building is not occupied by residents, the scheme will not need a tenants’ ballot to proceed. The initial scheme has been subject to Design Council design review. Recognising the surrounding character, the Design Council regarded the principle of an additional tall building as acceptable in this location, principally due to the existence of a tower on the estate

Our current council adminstration is made up of some very strange persons who don't give a toss about community and decent housing with outdoor space, it's now all about more and more little boxes, all just the same.

There are two more towers of 16 and 17 storeys currently in the process of being built, just behind the "Twin Towers" in Wembley by the same developer "Squarestone Hub, and planning permission has been granted for Ujima House redevelopment and Copland School frontage redevelopment on the opposite side of the High Road.

What is interesting though is High Rise flats that have already been built and completed well over 18 months ago are still virtually empty apart from the Social Housing portion. This is the case for Williamson Heights - Peabody Trust and Wembley Place (old Brent House) which is Genesis Nottinghill, both have little amenity space, and are car free developments, and are up for Shared Ownership or Private Sale. IF we are so desperate for Housing why aren't people beating a path to their door? Is it just be because the rents are unaffordable for most, or that what happened at Grenfell has put a lot of people off living in High Rise, or in the Covid pandemic no one wants to be locked up in a pokey cell sorry flat in the Sky?

The 'domino effect in reverse' clearly seen in Greenwich where only this week permission granted for a 36-storey block:'One factor in the approval of the scheme was that a separate development of 24, 27 and 32-storey towers next door was approved in 2015'.

Janie - Maybe Butt and his coterie should be locked up in them for a while, see how they like it. We could also make them do their shopping on an Event Day.

High rise living is not an issue in my opinion provided there is sufficient natural light (not small windows), good sized rooms, green space outside, considerate and law abiding neighbours, adequate transport infrastructure and enough amenities to serve the local increased population. People should focus their efforts on demanding high quality flats and spaces, rather than complain constantly about height. With increasing population growth in London, building high has to be the way forward. My concern would be buying a flat in a block where there is also high social housing. Would never do it given the problems experienced with social housing tenants on the street i currently live on in Brent. Having to live in the same block would be a nightmare i image. This is why I would not spend hundreds of thousands on a flat in the "Twin Towers" in Wembley or in the Ujima House redevelopment (except to rent out). Yes, this may offend, but it's the truth. Pepper potting not for me given my experience of Brent social housing tenants. Ultimately it is people who make an area and estate a pleasant place to live. Our (fractured) society today is not what it used to be.

Brent's planners say, of tall buildings at Conduit Way:
'This will complement the taller buildings proposed on the Unisys and Bridge Park site and reinforce the gateway role from the North Circular of those entering the borough from further afield.'

I suspect that, if built, this "gateway" canyon would simply encourage drivers to stay on the North Circular, and get out of Brent as soon as they could!

This "planner-speak" is being used to justify the planned destruction of places that are homes where people could live contented lives, bringing up their families.

I had close relatives who lived near Conduit Way until 2012. Around ten years ago, Brent had a major programme of improvements to the 1920s homes on this estate, including external insulation on the solid walls, new roofs (with solar panels on those with the right aspect). There had been previous internal improvements around the 1980s, including central heating.

This was meant to ensure that these first Willesden Council family homes, with gardens, would be fit for purpose for decades to come.

Brent does need extra social housing for people in need on its waiting list. But if it concentrated on getting a full 50% of affordable rented homes as part of all large private developments, and made all of its own schemes (like that on the former Copland School site) affordable rented Council housing, it could meet that need without destroying existing family homes like Conduit Way.