This is the second and final part of Philip  Grant's Guest Post on the Macari music shop. The first part can be read HERE.

Welcome back to this concluding part of an Ealing Road music shop’s story. In Part 1 we met two Alans, a vocalist and a guitar player, who started a skiffle group with school friends, and regularly visited Macari’s Musical Exchange. We join them again as a “beat” group in the early 1960s. 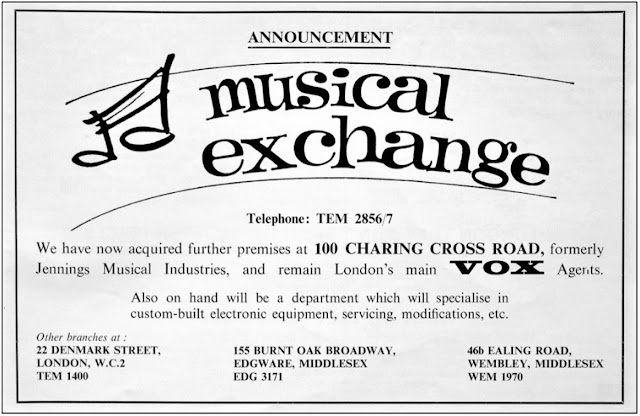 A Musical Exchange advert from the 1960s. (Image from the internet, courtesy of Tony Royden)

Alan Hayward and the Haymakers usually practised at Lyon Park School, and mainly performed at a club based there. One day, while rehearsing at the school, a teenage drummer called Keith Moon came to hear them. He showed them what he could do on his drums, and managed to move the drum kit as far as the door while drumming! The group was not impressed with him (nor he with them).

The young Keith Moon, from Chaplin Road, was a hyperactive boy, who joined the local Sea Cadets aged 12, and learned to play the bugle. On his way home from Alperton Secondary Modern School, he often used to go into Macari’s Musical Exchange, at one time learning to play the trumpet.

Glo Macari used to see him in the shop, and he must have been quite an attractive teenager. She used to go with her cousin to a nearby greengrocers (probably Smith’s Fruiterers at 40 Ealing Road) to buy a couple of pounds of potatoes, just to see him sweeping up at the back! Keith then decided that drums would be his instrument, and Glo remembers him buying some drum sticks from her grandfather. He was allowed to play on drums in the shop, and took lessons from a local professional drummer, Carlo Little.

[In the early 1960s Carlo was a member of The Savages, the backing group for Sudbury “singer” and performer Screaming Lord Sutch (if you’ve ever heard a recording of his one minor hit record, “Jack the Ripper”, you will know why I have put “singer” in inverted commas!). Carlo Little was a well-respected musician, and even played a few times for the “Rolling Stones” in 1962, when another Wembley drummer, Charlie Watts, was not available because he was still employed as a commercial artist.] 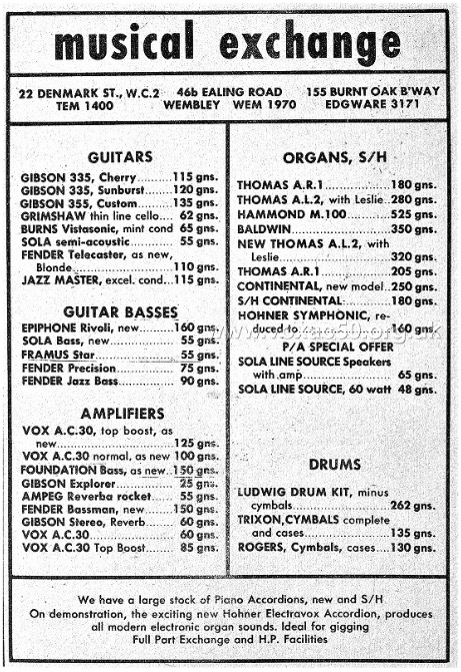 An Macari's advert from the 1960s. (Image from the internet, courtesy of Tony Royden)

Keith Moon left school at Easter 1961, not quite 15 years old, and got a job. His earnings helped him to buy his own Ludwig drum kit. By the end of 1962 he had joined a semi-professional group, The Beachcombers. They all had day jobs, but played in the evenings and at weekends. In April 1964 he went to the Railway Hotel, Wealdstone, to hear a group called The Who playing. They needed a replacement drummer, and Keith grabbed his opportunity. The rest, as they say, is history! 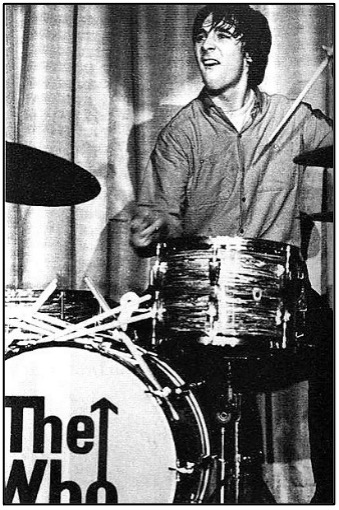 Keith Moon drumming with The Who. (Image from the internet)

You can hear The Who singing “My Generation”, and see Keith in action on the drums, here:

Gary was another young Wembley musician who often visited the shop. He remembers Rosa’s husband, Derek, being the manager there at the time, and that Grandpa Macari would sit in the shop with his accordion. He sometimes played along with customers, and Gary once joined him on guitar as he played “Under the Bridges of Paris”. Gary recalls seeing Keith Moon practicing there, and being told to calm down in case he damaged the drum kit. One of the instruments Gary bought in the shop was a second-hand Fender Stratocaster, for about £60 – this iconic guitar would cost a lot more now!

A 1957 Fender Stratocaster guitar. (Image from the internet)

Gary worked as a courier, and the shop would call him if a customer needed help getting purchases home, such as large amplifiers. He remembers that the Macari’s bought the shop next door (46a, on the corner, which Rosa ran as Derosa Ladies Wear), and them making a recording studio behind the shop. He helped with the work on this, sticking dozens of old egg boxes to the walls as soundproofing.

Glo Macari told us the recording studio was in a room at the back that her grandfather had originally used for giving accordion lessons. It had three booths, and wires going up through the ceiling to a control room in the flat above. There was a two-track machine that recorded the music and songs straight onto demo discs. Groups would send these discs to local agents, to get bookings for gigs, or even sometimes to record companies, in hope of something bigger!

By the early 1960s, Glo’s father Joe and Uncle Larry were working at Musical Exchange branches at Denmark Street and Charing Cross Road during the day, and playing some evenings in hotels or for wedding receptions. She began going along with them as a singer, and made some demo discs in the Wembley studio herself. In the Spring of 1965, still aged 14 and a pupil at St Gregory’s R.C. School in Kenton, she got a recording contract. 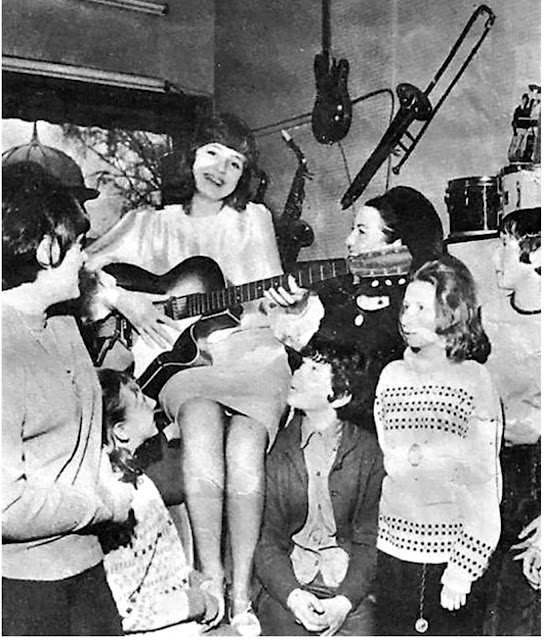 Glo Macari singing for some friends in the shop, March 1965. (“Wembley News” photo, courtesy of Glo!)

This photograph of Glo Macari, singing in the Ealing Road shop, appeared in the “Wembley News”, with a story about her contract, and her musical family. Her first single, released on the Piccadilly label, was “He knows I love him too much”, written by Carole King and Gerry Goffin, and recorded with the Ivor Raymond Orchestra. You can listen to Glo Macari singing this song here:

Glo’s records never made it into the “Top Twenty”, but she went on to be a successful songwriter and musical arranger. Some of the songs she wrote were recorded by 1970s groups such as Smokie and Racey. 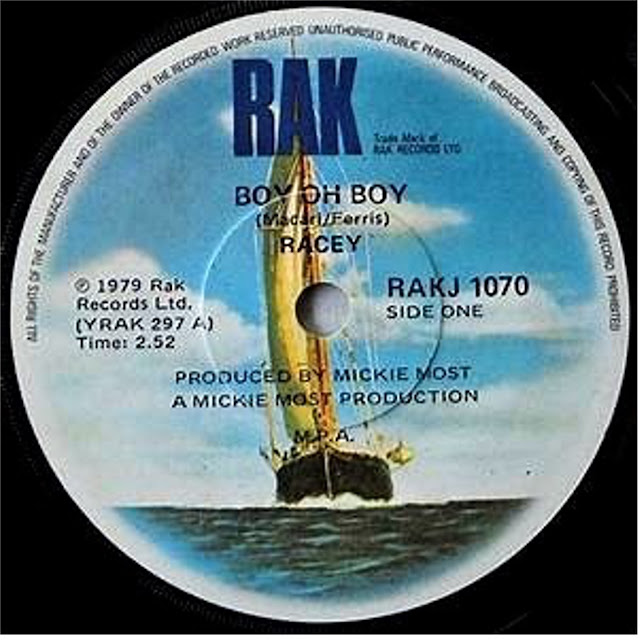 Not all of the musicians helped by Macari’s Musical Exchange in Ealing Road could be recording artists or become rock and roll legends (or experience the problems that came with a “superstar” lifestyle). Most just played for fun, for their friends and contemporaries, or might have made a small amount from playing at dances in youth clubs, church halls or pubs. But playing a guitar, in a group, you were part of the beat music scene that made such a difference to popular music, in this country and beyond, from the 1960s onwards. 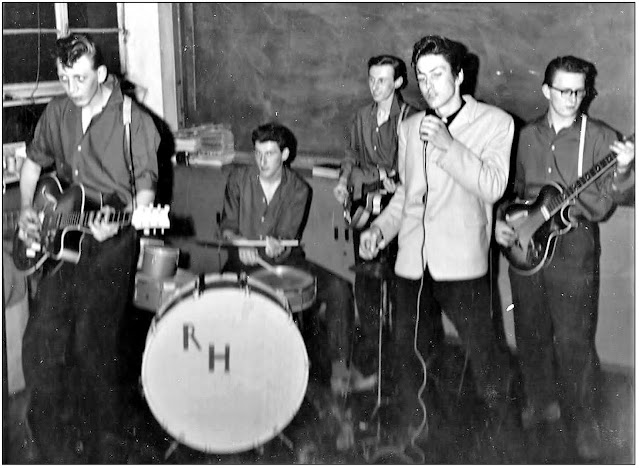 Alan Hayward and the Haymakers had a small popular local following. This picture of them, playing in a classroom at Lyon Park School, was taken by a Wembley Observer photographer in 1964. Around that time, they were allowed to play several songs during the interval at one of the Saturday night ballroom dances at Wembley (later Brent) Town Hall.

One day, around 1967, Gary got a ‘phone call from a friend who was at the shop, telling him to come down straight away with his guitar. He arrived and joined in with a “jamming” session in the shop which included Pete Townshend of The Who, Eric Clapton of Cream (whose drummer, Ginger Baker, lived in Wembley Park at the time) and two members of Status Quo. 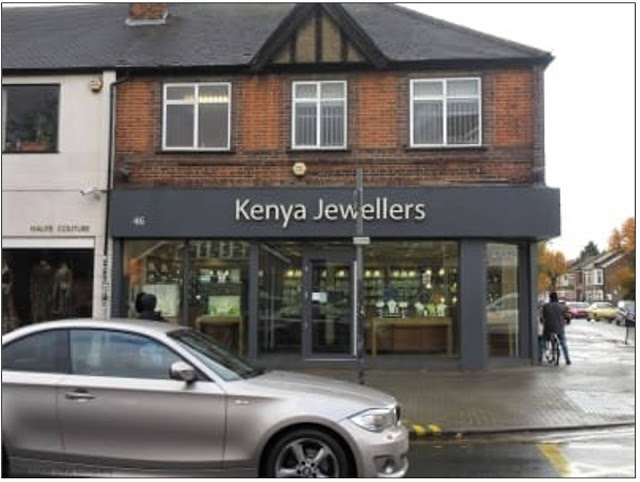 A modern picture of 46 Ealing Road, now Kenya Jewellers. (Image from the internet)

I’m not sure when the local branch of Macari’s Musical Exchange closed, but it was probably around 1970. By the early 1980s, Ealing Road was becoming a centre for businesses run by families of South Asian origin, from East African countries, where they had been made unwelcome after independence from British colonial rule. The two combined shops at 46 Ealing Road became Kenya Jewellers, and they still are.

During it’s time in Wembley the Macari’s shop had encouraged many young people play musical instruments, at the birth of modern Pop Music in Britain. The business continued, with its main shop in Charing Cross Road, before moving out of London, but is still run by the Macari family and supplying instruments to musicians today.

I hope you have enjoyed reading these two articles, and listening to some music from that time. If they have brought back any memories for you, which you would like to share, please feel free to add a comment below!

Editor's Note - These articles have provoked considerable interest along with earlier ones by Philip. HERE you can find a personal account of the enduring friendship between Ginger Baker and Charlie Watts.

Thank you, Martin, for adding the two "links" at the end of my article - both very interesting!

The blog by Ginger Baker's daughter, about the friendship between her father and Charlie Watts, shows these two "superstar" pop music drummers as they were - ordinary human beings that we can relate to.

Thanks for the very interesting articles and photos. In the mid- to late 1960's I played guitar in a band which had two members from Wembley, Mick Hurley on drums and Pete Addison on bass. We did a lot of gigs at the weekends, mostly CIU or Legion Clubs. Sometimes there would be guest singers, musicians and comedians doing a spot, and we would be expected to back them. I distinctly remember Joe and Gloria Macari, also Derek Yelding, who did a ventriloquist act. By day he managed the Wembley shop. My wife also came from Wembley, and her memories of that time mainly featured De Marco's ice cream parlour and the Regal cinema!
We were married in 1971 at St. John's Church, just along the Wembley High Road.

..... still got the original 'My Generation' Who album from Macaris, bought by my brother as a present for me with the added surprise of the cover sleeve embellished with Keith Moon's autograph sometime in '65...now I know why!

Thank you both for your comments, and sharing your memories with us.

That album by "The Who", with Keith's autograph on it, is a special piece of Macari's musical history!