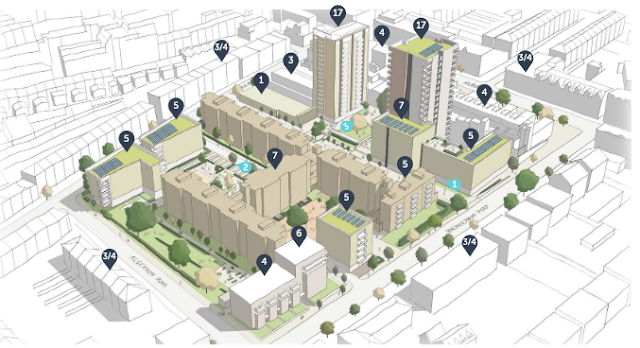 This is Brent Council's Press Statement

The design proposal for the new homes on Kilburn Square Estate is set to be adapted through collaboration with residents, the council has announced today.

This comes after extensive engagement throughout the summer with those living on the estate and the local community. The council has listened to people’s feedback and agreed to review the proposals taking into account some of the most commonly raised concerns, while also maintaining its commitment to delivering a significant number of new council homes.

Each council housing scheme is different and will always be considered within its own specific context.

Brent is in the grip of a severe housing crisis. There are more than 1,400 families living in temporary accommodation and many more whose home is completely unsuitable. We are doing everything in our power to build more council homes and create a fairer and more equal borough.

Since autumn 2020, we have been working with Kilburn Square residents on proposals to build new homes on the estate. We have received some helpful feedback and I want to thank everyone who has worked with us. I also want to thank everyone for being patient with us while we review the scheme and decide how best to take it forward.

We are keen to amend the existing design, working with the residents of Kilburn Square. It is essential that all tenants and leaseholders attend the workshops we will be holding shortly to have their say. By doing this, we can make sure the new homes we build and the changes we make across the estate are as good as they can be for the community, for future residents and for the council.

A letter and a newsletter will be sent to all residents living on Kilburn Square this week (w/c 13 September). This will include more information about this decision and the upcoming opportunities for residents to get involved in shaping the design.

The statement is partly in response to a public question posed for Cllr Southwood at Monday's Cabiner meeting on the Kilburn Square development that by the Kilburn Square Stakeholders Group,  a coalition of four local Residents' Associations and the Kilburn Neighbourhood Plan Forum. The KSSG is spearheaded by Kilburn Village Residents' Association - whose territory includes the Estate itself as well as the surrounding streets.

·       The saga of this huge "Infill" project has been running since last October. The Stakeholder Group was formed in January and since then we’ve been patiently dealing with Cllr Southwood, senior Officers and the project team, explaining why we believe the scheme is much too big.

·         The drawn-out process came to a head in August, and our Question was designed to press the Council to finally deliver on its promise to heed the voices of the residents and the local community. We are grateful to Cllr Southwood and her colleagues for the written response being presented on Monday, to Council and the wider public.

·         We look forward to the promised shift to a more collaborative approach to finalising a smaller scheme that can, in Cllr Southwood’s words, “work for everyone".

Why has it taken a year to get residents involved in shaping the design???

An excellent response from Keith Anderson. I hope that Brent Council will honour what Councillor Southwood appears to be promising!