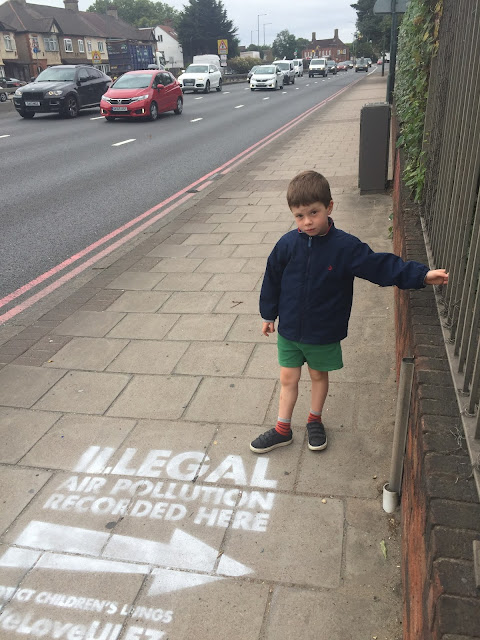 A group of concerned parents have launched a pavement art campaign in areas of London with harmful levels of nitrogen dioxide (NO2). Mums for Lungs campaigners used eye-catching stencils stating, ‘illegal air pollution recorded here’ and demanding action to ‘protect children’s lungs.’ The stencils point to 15 air quality monitors that recorded illegal levels of NO2 in 2020 – a pollutant that can cause reduced lung function in children, as well as trigger asthma attacks and hospital admissions for children living with lung conditions. 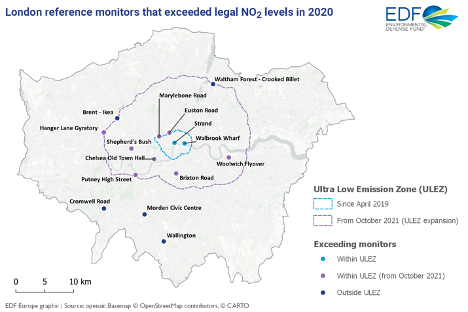 London has never met its requirement to reduce pollution below legal limits(1) and the health impacts of pollution are not equal. Previous research shows that NO2 pollution is on average 24-31% higher in areas where people from Black, Asian or minority ethnic backgrounds are most likely to live. (2)

Most of the illegal sites are located outside of the Ultra Low Emission Zone (ULEZ), London’s measure to lower diesel pollution by charging more polluting vehicles to enter the city centre. The zone dramatically reduced air pollution in central London (4) and will be expanded to a much larger area on 25 October 2021. Some of the illegally polluted sites are beyond the ULEZ expansion, including in Kingston and Merton.

Nine of the 15 locations are on or adjacent to the city’s Red Routes – a network of major roads managed by Transport for London. A recent health assessment has shown how these roads create an unequal health burden in the city (5), leading to calls for action to make them significantly healthier and safer. Around 47,500 primary school children study close to these major roads. (6) The Mayor of London has committed to identifying ‘bespoke solutions’ for Red Route locations that are unlikely to meet legal NO2 limits after the ULEZ expansion, but plans are yet to be seen. (7)

The expansion of the ULEZ cannot happen soon enough in Harlesden. Our high street has the highest NO2 rating in the UK, so cleaning up the air in our area requires urgent action.

However, the ULEZ expansion won’t be sufficient for Harlesden children to breathe clean air and, also, it won’t cover Brent North. IKEA Wembley, for example, is on the ‘wrong side’ of the North circular. So, NO2 levels will remain extremely high there and that's a real worry for me, as I live close to IKEA Wembley with my husband and 4 year old son.

All children deserve clean air, whether they live in Brent North or Brent South. It’s the bare minimum we owe them as adults. Diesel vehicles need banning in London as soon as possible. The boom in diesel delivery vans in the capital is completely unsustainable. It has to be reversed at speed.