'Just Another Immigrant Variety Show' comes to 5 venues in Brent next month - don't miss it! 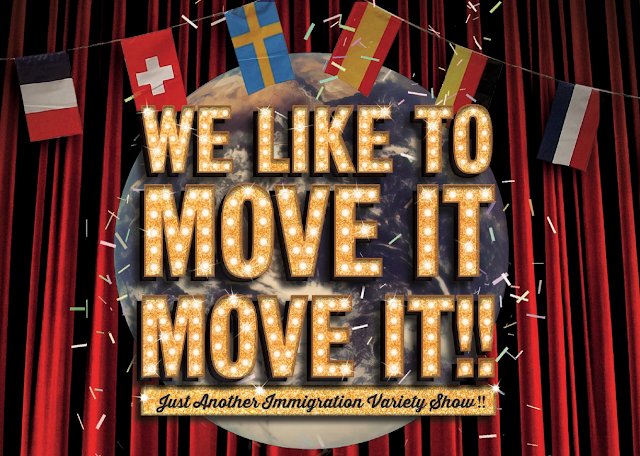 ice&fire –and Matthew Schmolle Productions are delighted to announce the London tour of a brand-new all-immigrant variety show. WE LIKE TO MOVE IT MOVE IT is performed by a clown collective of immigrant performers, who take the audience on a journey of variety and satire. grappling with our decade’s stickiest subject; immigration.  It’s a show where karaoke meets moral philosophy, incorporating a stand-up pigeon double act, smorgasbord of characters, plenty of juice, plenty of biscuits and plenty of food for thought.

ice&fire have established themselves as a theatre company renowned for their use of performance to explore human rights issues, in WE LIKE TO MOVE IT MOVE IT, the cast do just that. Because while Brexit is now ‘done’ it seems we are still far from done with the age-old immigration ‘question.’ This all-immigrant variety show, has been created by Olivier award winner Donnacadh O’Briain (Ireland) and playwright Amy Ng (Hong Kong), with a company of actors; Jahmila Heath (Jamaica), Tomoko Komura (Japan), Gaël Le Cornec (Brazil-via-France) and Sergio Maggiolo (Peru). Collectively they are over 29,000 miles from home.

Touring to every corner of London, including in Brent visiting venues in  Wembley, Willesden Green, South Kilburn, Harlesden and Neasden, and serving up jokes, songs and satire, the performers ask; ‘What is behind our societal acceptance of immigration control? What does it say about us and what do those who have come to the UK from somewhere else want to say about it?’

Christine Bacon from ice&fire says: ‘As a company, ice&fire have for some time been concerned with the here and now of human rights stories and what can be done to make current systems more fair. With this project, we are trying to take a big step back and interrogate how and why immigration controls are seen as a common sense and 'natural' feature of our world. But with clowns, so it will make you smile.'

Matthew Schmolle says: ‘We are passionate about getting this show out beyond the traditional theatre-world-echo-chamber, getting it in front of the broadest audience possible and seeing what all those people have to say about these over-looked issues which underpin so much of modern discourse around immigration’.

Email ThisBlogThis!Share to TwitterShare to FacebookShare to Pinterest
Labels: i ceandfire, i mmigration, theatre