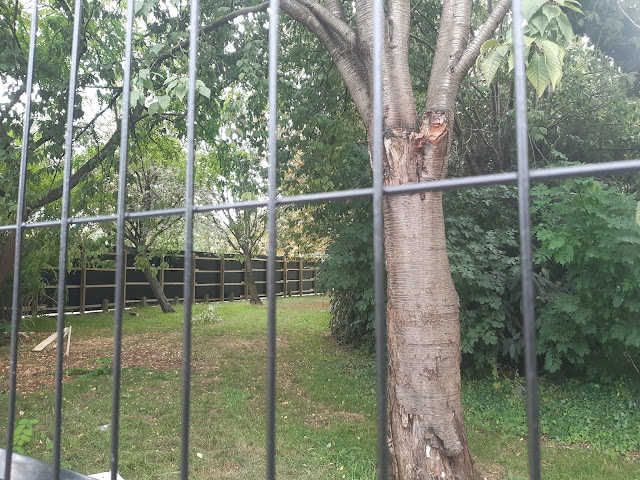 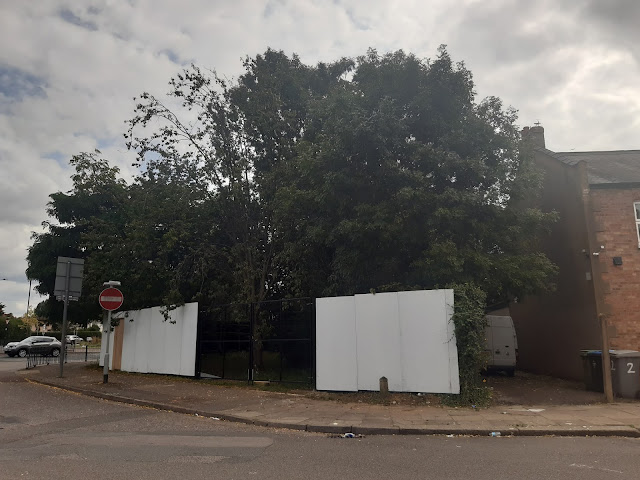 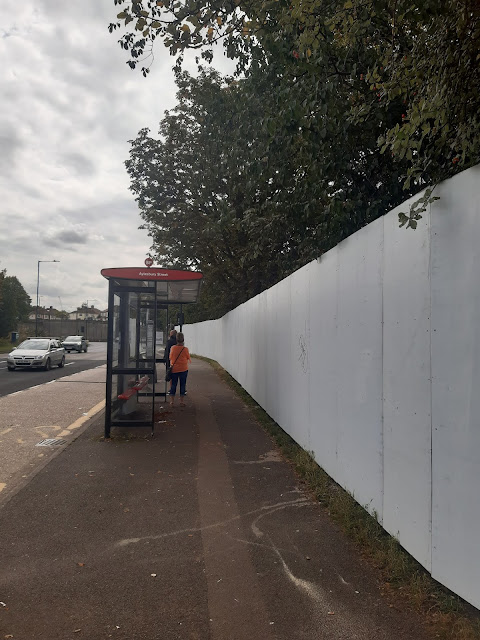 Local social media burst into life over the weekend after in the space of a few days  hoarding was erected around a wooded green space next to busy Neasden Lane North. Many residents claim this was the first they knew of a planned 3 storey development of 9 flats on the green space.  They further claim that the delegated decision (ie made by officer, not sent to Planning Committee) was made when people were preoccupied with the pandemic. Brent Council claim that 57 letters were sent out to residents but only two comments were received.

The satellite view below shows the extent of the space between Aylesbury Street and West Way. Residents said that the trees screen them from pollution, noise and dust from the main road. 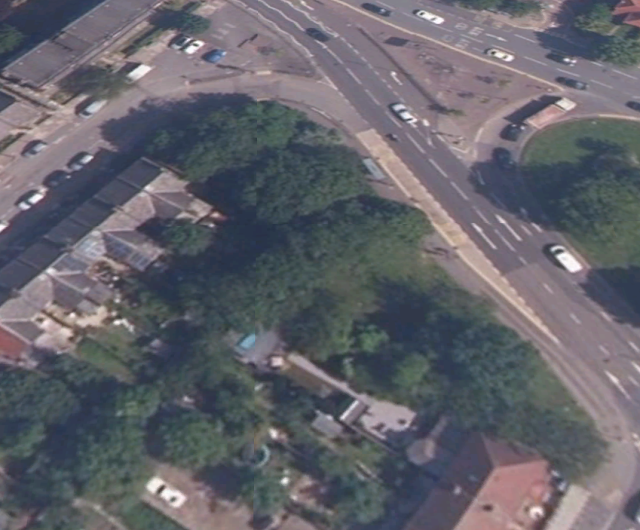 They have launched a petition entitled 'Stop killing trees in Brent '  LINK:

Brent Council granted permission (19/3738 July 2020) to erect a three storey block of flats in the land FULL OF MATURE TREES, next to Aylesbury Street and West Way, in Neasden Lane (A4088) by the bust stop after the flyover. Using Covid as a coverage Brent Council sold a public green space to a housing development company and pushed throug the planning permission to cut all the trees and built 9 flats next to a polluting road allowing the neighbouring streets surging with pollution too once the trees are gone.

If you care about whats happening in the area and the environment or this "development" affects you please sign this petition forcing the council to re consider the application and stop the works immediately before any of the green gets damaged in any way.

The Arboricultural Implications Assessment LINK submitted to Planning found many of the trees to be low quality (although that doesn't stop them doing their screening job) and concluded:

The proposed development would require the removal of 22 individual trees and one small group, all but one of which are BS category C. These are mainly small, short lived or poorly formed trees which should not represent a significant constraint to the proposals, according
to BS5837:2012. A further 10 trees are recommended for felling on safety/short lifespan grounds whether or not the development proceeds.

Three offsite Ash trees will not be affected by the proposed building and nominal potential impacts of a path are mitigated by existing trees for removal dominating the areas of near surface disturbance.

The retained trees will be appropriately protected by robust tree protection fencing in accordance with BS5837:2012 requirements. Only temporary foot access for hand tool construction of the proposed path will be allowed with details indicated on the Tree
Protection Plan.

The Tree Protection Plan can be referred to in a specifically worded condition to ensure that the retained offsite trees are appropriately protected during the construction process. 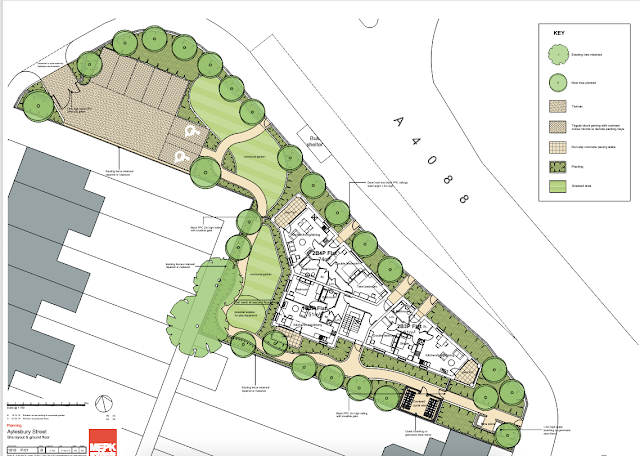 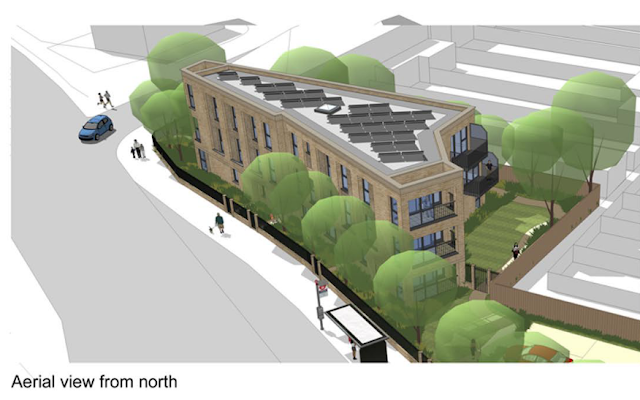 The residents I spoke to this morning were not only concerned about their own exposure to pollution once the mature trees were removed but that of the residents of the new block of flats.

There is an Air Quality Report. These extracts show that it is not an ideal spot for anyone to live LINK. 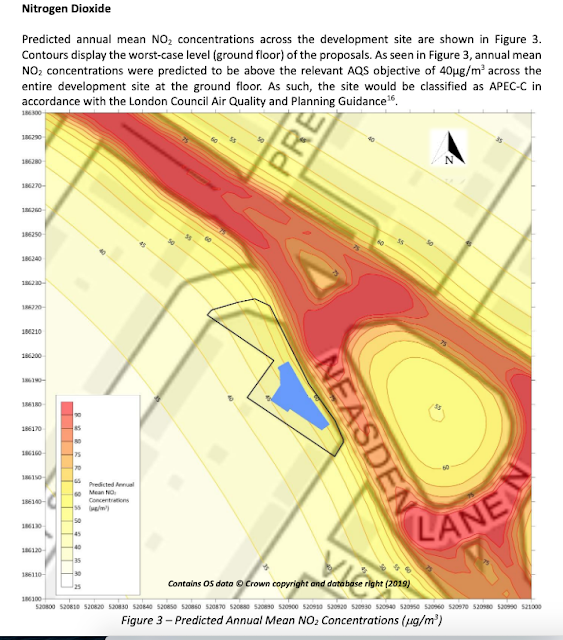 Based on the assessment results, exposure of future receptors to exceedances of the annual mean AQS objective for NO2 is considered likely as a result of the proposed development. The development would be classified as APEC-C on all levels of the proposals; therefore, mitigation measures to protect future users from poor air quality are included in Section 7.

Not withstanding this the Final Delegated Report states (typos in original) LINK:

The applicant has not provide an Air Quality Assessment subject of this proposal due to the habitable windows proximity to the Neasden Lane Gyratory. Brent’s Environmental Health Team have reviewed thereport and confirmed that as the NO2 levels at the windows facing Neasden Lane arew upto 57.17μmg3.

This would require mitigation in the form of a mechanical ventilation system to ensure that the resdients are not exposed to harmful levels of NO2 concentrations. Such systemj does still enable windows to be opened and not required to be sealed shut. Environmental Health have supported the recommended subject to a condition.

It is clear that a decision to approve the development was made more than a year ago, the erection of hoarding indicates that either work is due to start or, perhaps,  that the developer is protecting the site from possible community action to save the space!

Nevertheless residents are launching a last minute bid to halt the development and told Wembley Matters this afternoon:

A good few people in the neighbourhood are utterly shocked that this thing can happen out of the blue. Loosing a green space full of mature trees to turn into a concrete block right by a busy road looks like a good initiative for Brent Council to exercise their green policies and drive to a healthy environment for people to live in. Brent Council used lockdown to push through this outrageous plan, first of all to sell a public land to private developers for profit and then approve a planning permission to turn a green space  into a concrete jungle in an area where flooding is already an issue and done it so low profile that no one could suspect anything until the area been boarded up.

It might be too late as many of us pointed out but without fight we cannot stand and watch it. We have created a petition to present it to Brent Council officials to put pressure on them showing that it is against the public will and they have to halt the works to investigate whether any failings occurred during the process.
The link to the petition is HERE:
We are also having a meeting with Clr Roxanne Mashari on Wednesday, 15th of September at 10:30 am on the site of the “development”, anyone who feels strongly about the environment and Brent Council policies please come and show your support.

I can see the downsides of this proposed development, particularly the loss of "green space" and mature trees beside a heavily air-polluted road (even "low quality" trees help to clean the air!), and building homes just 3 metres away from such a road.

However, their are some upsides as well. The "developer" is Innisfree Housing Association, and their three-storey block will provide nine affordable homes, 6 x 2-bed and 3 x 1-bed, for local people in housing need.

On balance, I believe that there have been worse developments proposed (and built) in Brent during recent years.

If any of you gave a hoot about the climate you'd be supporting this scheme. Blocking homes just pushes demand to areas where living arrangements produce higher levels of green house gases.

Shame on you for blocking homes in a housing crisis, pretending it is about the environment

In July 2019 Brent Council Declare A Climate Emergency - June 2020 Brent Planners Grant Permission to remove 35 trees and consequently wild life from a piece of wild land in the middle of one of the most polluted areas of Brent, yes, Neasden Lane. What utter stupidity, but it is what we have come to expect of Brent Council and their awful blinkered political leadership. The Council Leader Cllr Mo Butt and the Cabinet Member for Regeneration Cllr Shama Tatler should be ashamed of themselves, and they should resign over this decision. How can a Climate Emergency be declared and then they allow the destruction of a pocket of green in the middle of a polluted desert which protects the surrounding properies from the pollution.

At least some councillors think this decision is wrong, as do most residents (once they found out). I suppose the residents of Aylesbury Street and West Way will be really happy with this decision and will rush to the ballot box and vote Labour again (me thinks not).