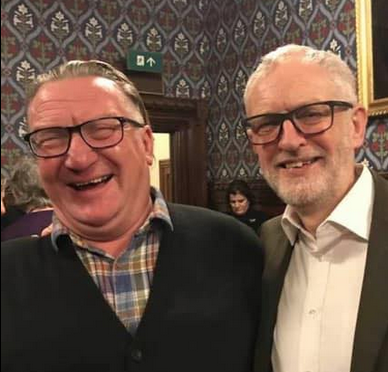 As a Green Party member you may think that what is going on in the Labour Party should not concern me - let them stew in their own juice... etc.

But when our main Opposition party is being rent asunder by what appears to be an old fashioned purge, when natural justice is ignored and guilt by association deployed, and retrospectively at that,  then everyone must acknowledge the threat to democracy.

It is doubly concerning that these actions characteristic of despotic regimes are being carried out in a party  led by  a former lawyer and Director of Public Prosecutions, Keir Starmer.

Recently Wembley Matters has carried stories about the suspension of Kilburn Labour Party member  Pete Firmin for allowing discussion of a motion calling for the restoration of the whip to Jeremy Corbyn LINK, and the threatened expulsion of Harrow Councillor Pam Fitzpatrick for writing an article for a magazine that was only banned by Labour a year later  LINK

Graham Durham is a long-time Labour and trade union activist, who served decades ago as a Brent Labour councillor. He is well-known in Brent and I have often seen him in action. I do not always agree with him or his tactics but few can doubt his sincere commitment to the Labour Party and the cause of socialism.

However he has now been freed from a period of limbo - the Sword of Damocles hanging over his head for a long timehas fallen - he has been informed of his expulsion. Once again it is applied retrospectively.

The Labour bureaucrats have advised me that I am expelled from the Party for, ‘calling for a leadership challenge to Keir Starmer.’ After 51 years I am sad and angry at the witch-hunt of socialists but at least their politics is clear

I have received today notice from the Government and Legal Unit expelling me from the Labour Party (of which I have been a member for 51 years).

The Labour bureaucrats state that my defence that the Zoom meeting of Labour In Exile occurred on 27 March 2021 and so I could not know they would proscribe this organisation on 20 July 2021 is irrelevant.

Moreover, they have studied a tape of that meeting and claim I said, ‘We should organise a conference to plan a leadership challenge to Starmer.’

I did and, although I am angry and upset at this witch-hunt, at least it was for a correct political call I made.

On a previous occasion when the Labour Party suspended Durham in the midst of NEC elections, effectively excluding him from the ballot,   Brent Central CLP's GC approved a motion which said LINK:

Removing candidates in this way smacks of totalitarian regimes who deal with "opponents" in this way rather than letting the electorate decide.

Many will find the sifting of evidence from recordings of zoom meetings ominous and on a practical level wouldn't Labour Party staff be better deployed helping organise opposition and campaigns against this dreadful government?

It remains to be seen what the reaction from the local party and prominent figures in Brent Labour will be to this turn of events.

That photo alone would condemn Graham in the eyes of Starmer's not-Labour Party!!!

I'm sure the Right Wing Councillors in Brent will be very happy not to have Mr Durham interferring in local Labour Party meetings. They've no chance.