This article only came about because of an enquiry to Wembley History Society. What were the name and address of a music shop in Ealing Road run by the Macari family around the 1960s, and could we provide a photograph of it? The first part was quite easy, Macari’s Musical Exchange was at 46b Ealing Road. But we can’t find a photograph of the outside of the shop. If anyone reading this has one, please share a copy of it with us (c/o Wembley Matters)! 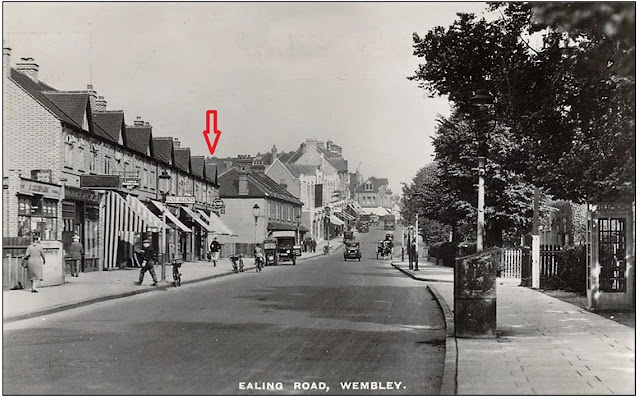 Along with the shop’s address, we did receive a number of memories of the Macari family and the shop from the Society’s members and friends. Some of these were quite detailed. As they help to tell the story of those times, I decided to put them together in an article, both for general interest and for anyone who might like to know more about Wembley’s music history. I’ve since received some more information from the family itself, and am now including that as well.

Terry doesn’t remember the shop, but was taught to play the guitar in 1957/58 by Anthony Macari, at the family’s home in Canons Park. With his knowledge of Music Hall and Variety Theatre history, Terry let me know what a musical family they were. In the years after the Second World War, Anthony and his children, Larry, Joe and Rosa, were in an accordion band, Macari’s Dutch Serenaders. By the 1960s, they were also known as Anthony Macari and His Dutch Serenaders, with Larry no longer in the group.

46 Ealing Road is on the corner of Chaplin Road, at the northern end of a small parade of shops (numbers 46 to 60). The Macari shop is not shown in the 1958 edition of Curley’s Directory of Wembley, but that must have been out of date, as the business had opened by January that year. This is the top of a letter sent by Anthony to Rosa, who had a singing engagement in Dublin at the time.

The Musical Exchange headed notepaper from 1958. (Courtesy of Glo Macari)

Macari’s Musical Exchange does appear in the 1962 and 1968 editions of the Directory. There were two shops at number forty-six. 46b was the music shop, while 46a was Derosa Ladies Wear. This was run by Rosa and her sister-in-law, Jean (Joe’s wife), and took over the costume hire business, as well as selling evening gowns and children’s clothes. Anthony Macari is shown at 46c, the flat above the shops reached by stairs at the back, and he lived there for a time with his wife, as well as using one room [details in Part 2!] for the music business. 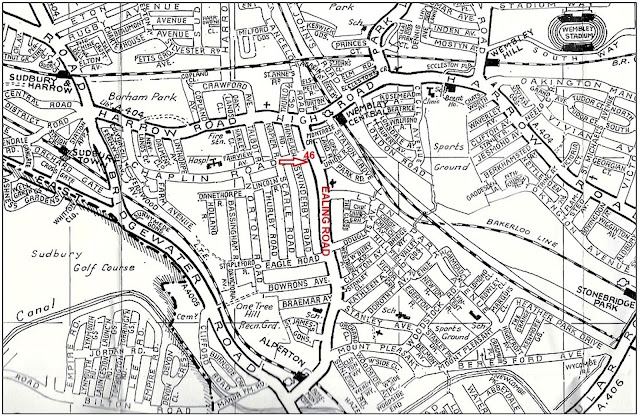 The late 1950s was a pivotal time in music history. More people had radios and gramophones on which they could listen to music, but much of what you could listen to had been dance bands, such as Wembley-born Victor Silvester’s. Most “popular music” came from America, and performers like Elvis Presley and Buddy Holly introduced young people to more upbeat songs, played by small groups with guitars, which came to be known as “rock and roll”. 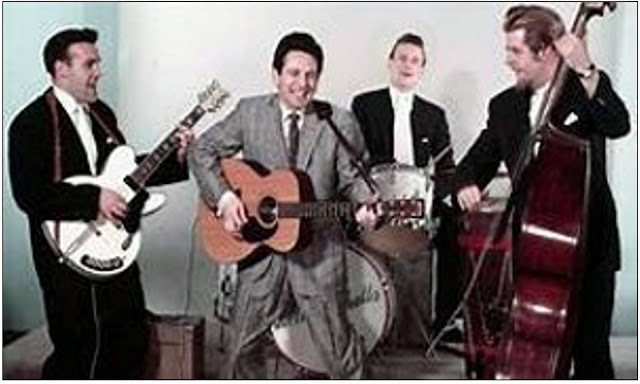 Lonnie Donegan and his Skiffle Group, late 1950s. (Image from the internet)

In England, there was a transitional stage, with its roots in jazz and folk music, called “skiffle”. Lonnie Donegan was one of its leading acts, but by 1958 the country also had its own “Pop” stars, such as Cliff Richard and his backing group, soon to be known as The Shadows (which included Jet Harris, from Willesden, on bass guitar and Tony Meehan, from West Hampstead, on drums). By then, many teenage boys wanted to play in rock and roll groups!

The Macaris had a shop in Burnt Oak before opening another branch of the business in Ealing Road, Wembley. Kay’s older brother remembered the shop:

‘It was in the parade of shops opposite the old St Andrew's Church which is now the Wembley Mosque, not far from the junction with Chaplin Road. There was a cycle shop next door.  The shop wasn’t that big, they had a couple of upright pianos, lots of brass instruments, acoustic guitars and mostly “old fashioned” instruments.’

‘He was passing the shop one day and Hattie Jacques and John Le Mesurier were coming out with instruments they’d bought for their kids. Keith Moon who lived in Chaplin Road used to practice there, and also in the Pavitt Hall on the corner of Union Road.’

Alan remembers the shop well, with guitars hung on the walls. He and some friends had formed a group as was so common in the early 1960s. He and the singer would go and ‘jam’ at the shop. He recalls the father and son running the shop being very helpful when he needed a new bridge for one of his guitars. Musicians wanting work or people requiring musicians would use the shop as a hub. 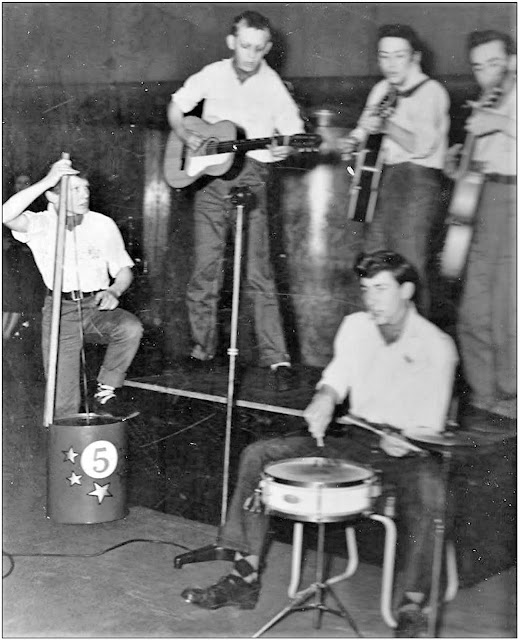 Alan’s first group was a skiffle band calling themselves “The 5 Stars”. As you can see from the photograph, three of them played guitars, and their drummer, Roger, just had a side drum. A common feature of skiffle groups was the improvised bass, often called a tea chest bass (as that is what most of them were made from), although this one appears to use an oil can. A single string ran from the can (or wooden box) to the top of a broom handle. When the string was plucked, the sound resonated from the can, and the bass note could be changed by altering the position of the broom handle!

Three of the 5 Stars went on to form another group, led by their singer, Alan Hayward. The two Alans would practice in the shop, something the Macaris encouraged as it brought more interest to their business. There was no separate rehearsal room, just an area in the shop itself. Once when they were practicing, lead guitarist Alan was allowed to play “The Blue Moon of Kentucky” (a song from Elvis Presley’s first record in 1954) on a maroon Gibson guitar which had been on display, hung on the shop’s wall. 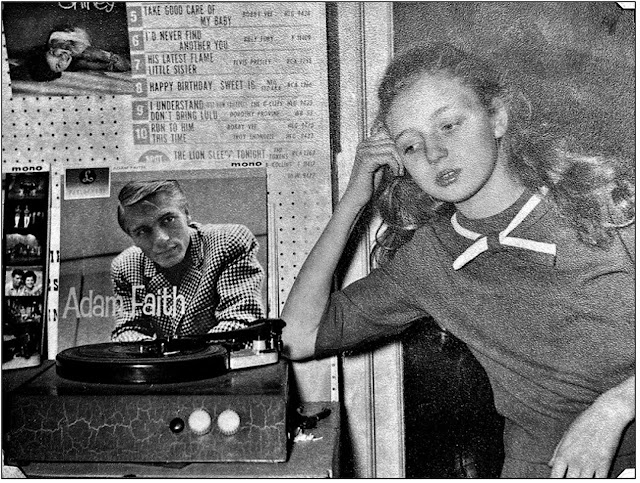 Glo Macari, listening to a record at the shop, 1961. (Courtesy of Glo Macari)

As well as instruments, the shop also sold records. Anthony Macari’s grand-daughter Gloria (“Glo”) liked spending time in the shop, listening to the latest songs, and learning the words and tunes. Her family lived in Clarendon Gardens, and she went to Park Lane, then St Joseph’s R.C. primary schools. She was already playing guitar by then, and the famous guitarist, Bert Weedon, who often came into the shop, gave her some extra lessons. You can hear Bert playing his 1959 hit record, “Guitar Boogie Shuffle”, here:

Like many Wembley children at the time, most of her Saturday mornings were spent at the Regal Cinema, just up the road from the shop, for the children’s picture shows. Sometimes these also included the chance for youngsters to perform on the stage – ‘very exciting!’ Glo remembers singing “Bobby’s Girl” there, which was a big “hit” for Susan Maughan in 1962. 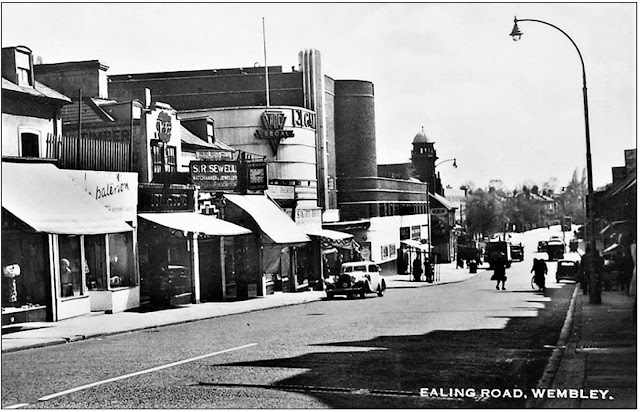 There will be more on the music shop’s story, and the musicians who used it, next weekend. This will include a teenager from Chaplin Road, who bought some drum sticks there (can you guess Who?). I hope you can join me then, to enjoy more local history, and music, from a time that played a big part in the development of modern “Pop”.

Very very interesting-thankyou for this. I'd totally forgotten about the Music Exchange! My childhood friend Dennis was bought his first guitar from there, but I don't know if he was taught there. I do know he became a very good player though. Looking forwards to part 2!

I never knew about this shop (it was before my time in Wembley), but when people began to share memories of it, I realised that this was a story that needed to be recorded and made available to others.

I've heard direct from a lady who remembers a girl named Macari at Park Lane Primary School when she was a pupil there in the 1950s, and regularly passing the shop on her way to Ealing Road Library.

What memories of the shop do you have? Please share them with us.