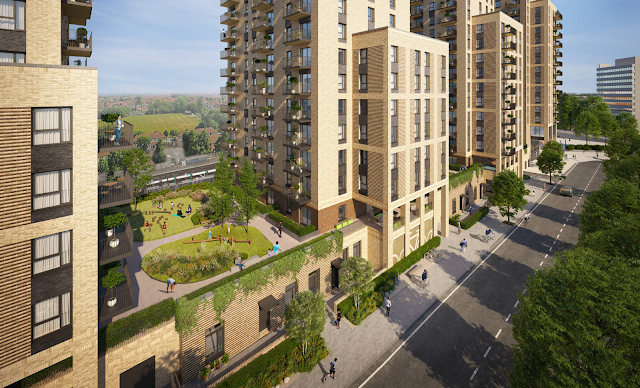 As reported by Wembley Matters in June LINK Robert Jenrick, Communities Secretary has called in the development on the TfL car park next to Wembley Park station and referred it to the Planning Inspectorate.

Yesterday the Architects Journal LINK published an article about the call-in writing:

Brent Council’s planning committee unanimously approved the scheme at the end of last year after planning officers backed the proposal.

But Jenrick has now called in the scheme, telling Brent Council he particularly wants to hear about whether the plans will: create a nice place; be consistent with national housing policy; conserve the historic environment; and accord with the local development plan.

The Ministry of Housing, Communities and Local Government declined to comment on Jenrick’s particular areas of concern, pointing out that its policy since 2019 has been not to comment on why applications are called-in.

Make of that what you will.

The Planning Inspector instructed by the Secretary of State is T Gilbert-Wooldridge MRTPI IHBC and the inquiry will open at 10.00am on 28 September 2021. Currently 6 sitting days have been scheduled  (provisionally 28 Sept – 1 Oct and 4-5 October).

The joint developer with TfL is Barratt  London who have come in for some criticism on social media this morning:

Aren't the railways considered part of Brent's Green Chains and Wildlife Corridors and shouldn't be built on, the same goes for canal banks known as Blue Ribbons. Taken from Brent's 20016 Development Management Policies

5.8 Green chains and wildlife corridors are linked or more continuous areas of open space which allow for the movement of plants and animals
and may provide an extension of the habitats they join. In Brent green corridors include areas such as railway embankments and the Blue Ribbon network and are identified on Brent’s Policies Map.

These routes will be protected from development which would impede movement. In exceptional circumstances it may be appropriate to provide an alternative route, providing it can be robustly demonstrated this will continue to support movement.

The report in the "Architects Journal" is not completely accurate. The decision at Brent's Planning meeting last November was not unanimous - it was only the Labour councillors on the committee who voted to approve the Barratt / TfL application.

The reasons given by the Communities Secretary for calling-in the application do sound rather generic (pronounced Jen-e-rik!), but he was on the right track with one of them. Was the application in accord with the local development plan? NO - it definitely wasn't!

The report omits the fifth of the points in the reasons for call-in, which was 'any other matters which the Inspector considers relevant'. After reading comments submitted after the call-in was announced, the Inspector has added three very relevant extra points to the list:

'vi) The effect of the proposed development on parking and highway safety;

vii) The effect of the proposed development on the living conditions of occupiers of neighbouring properties;

No doubt Barratt / TfL, and perhaps Brent Council as well, will have barristers (possibly several, including a QC) presenting their arguments to the Planning Inspector. If the Inquiry lasts the full six days, that will amount to a hefty bill! But it will be impossible to know, until his report is published, which way the Inspector's recommendation will go.

And that will not necessarily be decisive, as the Secretary of State may not accept his recommendation anyway. On the evidence of some of Robert Jenrick's previous decisions, it may even depend on whether (and how much) Barratts are prepared to donate to the Conservative Party!

Further to the comment by Anonymous (2 September at 12:15) above, I agree that railway embankments are very important wildlife corridors. My home backs onto one, and I know the benefits from personal experience!

However, that does take on a new significance for the planning application, because of a proposed modification (part of MM15) to site allocation BCSA7 in Brent's draft Local Plan.

As part of the "Infrastructure Requirements", to bring any development on the station car park site into line with the London Plan (March 2021) Transport Policy T3, the following paragraph has been added:

‘The development should not compromise the ability to add potential platforms at Wembley Park station on the Chiltern Line Aylesbury Branch.’

The proposed Barratt / TfL development would come up to within 2.5 metres of the Chiltern Line. Brent has previously required a planning condition (which was meant to ensure that the problems of noise and vibration to the proposed new homes would be properly mitigated).

Now there is the question of would this leave enough room to build the platform(s) required for a future Wembley Park Chiltern Line Station? (I am bringing this point to the Planning Inspector's attention).

Why are Brent Council officers trying to mislead the public?

They need only to refer to the minutes of the 26 November 2020 Planning Committee meeting, on their own website, to read the truth: 'Voting on the decision was as follows: For 7; Against 1.'

I am pleased to say that Brent Council won't be wasting Council Taxpayers' money by sending a barrister to represent them at the (up to six days) Planning Inquiry.

A short, unsigned statement to the Inspector, on the headed notepaper of Brent's Planning & Development department concludes that:
'it is not the Council’s intention to call evidence at the inquiry save to
the extent which is necessary to address the issue of the required planning conditions and planning obligations.'

It can do this because: 'Brent Council considers that planning permission should be granted for this development.'

It is happy to leave it to the applicant(s) to handle the Planning Inquiry, because the Council has signed (although the identity of the signatory is redacted) a "Statement of Common Ground", prepared for Barratts / TfL by a specialist planning consultant.

The applicant considers 'that there will be no harm to the significance of designated heritage assets.'

'The Council considers that the Development would cause some very limited, less than substantial harm, to the significance of two designated heritage assets (Barn Hill Conservation Area and Lawns Court Conservation Area) through change to setting and views.'

The Council has agreed some points in the "Statement of Common Ground" which are designed to mislead the Inspector. One example of this is the claim that: ‘It is agreed that the character of the Application Site is informed by existing tall buildings.’

This is in support of buildings between 13 and 21 storeys tall, but the examples given for 'existing tall buildings' near Wembley Park Station car park are NOT tall buildings under Brent Council’s definition of ‘more than 30 metres / ten storeys high.’

They only “qualify” as tall buildings under the alternative definition of ‘more than 6 metres above the general prevailing heights of the surrounding area’!

Some of the claims in the "Statement of Common Ground" which Brent's planners have agreed are actually untrue. It refers to some of the recent proposed modifications to Brent's draft Local Plan, and says Brent’s draft Local Plan can be given significant weight, because of its advanced stage of preparation, and: ‘the fact that there were no objections raised to these policies in respect of the Application Site through the local plan review.’

The modifications it applies this statement to include the extension of the Tall Buildings Zone to include the station car park site, and a change to its site allocation details, increasing the "indicative capacity" for the site from 300 to 456 dwellings.

I know that there WERE objections to "these policies" as part of the proposed modifications consultation - I was one of the people who submitted them!