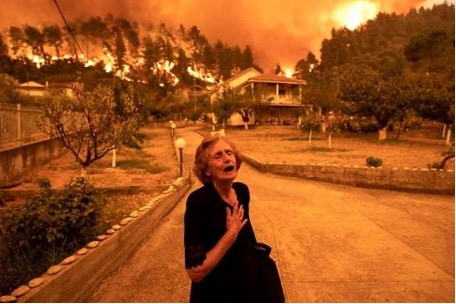 A Greek woman loses her home to wildfire on the Island of Evia (Photo:Bloomberg)

From Brent Friends of the Earth

Over the next few weeks Brent Friends of the Earth will stage a series of creative events to send the message to local residents and politicians that there is no time to waste if the threat of catastrophic climate change is to be tackled successfully.

We know that climate change is already causing “freak” highly destructive weather events worldwide. That includes the flooding here in Brent.  In the longer term it threatens the very existence of humanity.

We have a climate emergency

November sees the UK hosting COP26, the UN climate change meeting. It needs to be the most important “COP” ever.

Simon Erskine, from Brent Friends of the Earth, said:

“What is really worrying is that the extreme weather events we have seen so far are just the start – and with continuing carbon dioxide emissions they are going to get worse. We are also experiencing the mass extinctions of wildlife, rising sea levels and the oceans becoming dangerously acidic.

It is easy to get disheartened but it is not yet too late to change. If we stop burning fossil fuels and change our agricultural practices we can stop the deterioration in our climate before it is too late.

Unfortunately politicians tend to opt for business as usual, avoiding any change that might rock the boat. The only way that they will take the far-reaching actions necessary is to be convinced that that is the will of the voters.”

The group’s plans include running a stall in the Harlesden Plaza car park near Tesco on September 10th from 5 to 7 pm.  They will be making bunting full of messages about the climate emergency and hope people will join in. This will be displayed locally.

Other activities being planned by Brent FoE:

·      Campaigning for the Council to support the Climate and Ecological Emergency Bill,

·      A Flood and Nature Walk demonstrating how vulnerable Brent is,