Quintain's public relations company has been keen for Wembley Matters to publish details of the new park in the Wembley Regeneration area. Claims that it is the first 'new park' in Wembley Park are not quite true as we have the excellent Chalkhill Park in the locality, but on the other side of the railway line, which is maturing very nicely and really well used by the local community.

I responded that I would like to see the park for myself rather than base a story around the photographs and CGIs provided.

However, any green space is welcome amongst the concrete of the Wembley regeneration area. The southern section, south of Engineers Way,  has a considerable amount of concrete and we are promised a 'more rugged design' for the northern section on the site of the current Yellow car park on the other side of the road. (See LINK)

Today when I visited it was chilly despite the sunshine and there were few people about so the area seemed rather dead but I imagine on a warm day children would be having a great time in the fountains. A nursery will be opening soon on the edge of the park and they will be making use of it as an outdoor play and nature investigation areas.

It was rather disconcerting to see so much water after I had led a walk on Saturday highlighting the danger of flooding in parts of the regeneration area!

Union Park features a revolutionary water run-off system, which carries rainwater from around the area, filters it, and then releases it into one of the southern section’s lakes. Water features have been an important component of Wembley Park since it was first laid out by Humphry Repton in the 1770s, with the Wealdstone Brook and Brent River framing the then-manor and now-neighbourhood.

The park features a quotation from Humphry Repton on the side of what resembles a shed but is perhaps a pumping station, that is not entirely legible: 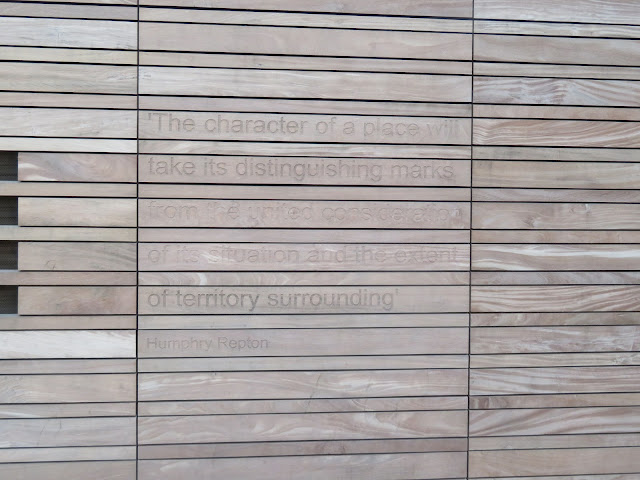 This gives the reader and visitor a yardstick with which to make up their mind about the park.

The first part of the park, which is open now, features amenities including a play park, paddling pools, outdoor gym equipment – which will be an extension of the super-gym right beside it – and a multi-use games area which will enable people to play a number of sports in view of the world-famous Wembley Stadium arch.

There is an adjacent cafe  at the foot of one of the high rises which is welcome but given the continuous sound of water, which is likely to induce a sense of urgency in bladders,  and the need for a place where wet children can change into dry clothes,  a public lavatory might be useful.

The park is not yet finished so there may well be one planned.

If you would like to see the park for yourself go along Olympic Way from Wembley Park Station and turn left along Engineers Way. It is a short walk to the Yellow Car Park and Union Park South is opposite.

I would be interested in your comments on the park.

Philip Grant has left a comment  below and asked me to publish these images by way of explanation. 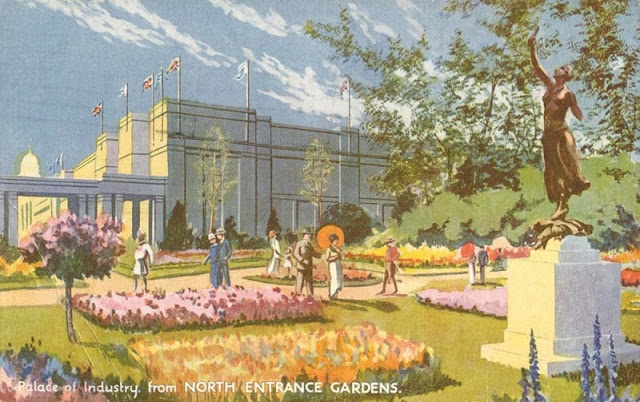 Postcard showing the North Entrance Gardens at Wembley Park in 1924 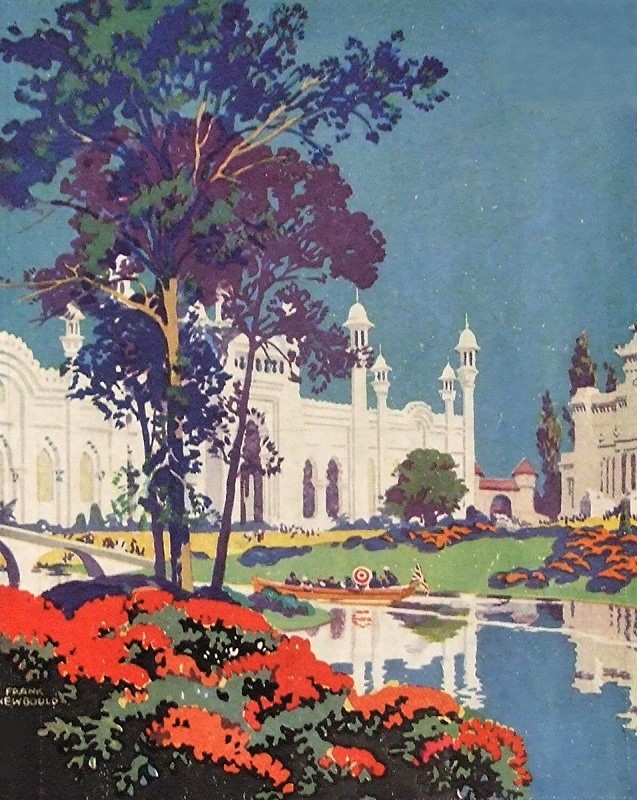 When you think of a park, particularly one that will serve a large population living in the surrounding high-density / high-rise housing, you'd expect it to include plenty of green open space, where children can run around for informal play.

Union Park's main green open space will be in the yet-to-be-built (due around 2024) northern section. The link in the article above was to a July 2021 blog by Martin about the detailed plans for that part of the park, and this is an extract from a comment I made then:
'The Meadows will be the main open area for recreation in the Northern Park, and from my measurement of the plans it is an oval-shaped area which is around sixty metres long and around forty metres wide.'

As well as the publicity for Union Park by Quintain and their PR company, Brent Council celebrated it in a "news release" on 13 September. They hailed the opening of its southern section, saying: 'This is the first time the area has had a new major green space for 150 years.'

Do Brent's Communications Team ever check their "facts", or do they just make up whatever sounds like a good "message", irrespective of whether it is true or not?

They need only go to the Brent Archives local history page for Wembley (on the Council's own website) to find that the Wembley Park pleasure grounds opened in 1894 (less than 130 years ago). See:
https://www.brent.gov.uk/services-for-residents/culture-leisure-and-parks/brent-museum-and-archives/find-out-about-your-local-area/history-of-wembley-and-tokyngton/

They would also find that the grounds for the British Empire Exhibition in 1924 (less than 100 years ago) included large areas of green open space! The North Entrance Gardens, which welcomed visitors as they came into the exhibition grounds from Wembley Park Station, were around 4 acres in size (larger than the southern section of Union Park).

There was a similar size of landscaped gardens around the BEE's artificial lake (which ran roughly along the southern side of Engineers Way, including the site of the new park). I will send Martin a couple of pictures from 1924/25, which I hope he will be able to add at the end of his article to make my point.

Yes, the new Union Park is a welcome break from the surrounding modern blocks, but does it live up to this quote, attributed to Cllr. Shama Tatler (Lead Member for Regeneration) in the Council's news release?

“Union Park, spanning almost seven-acres, is a key feature of our transformation plan, carefully designed to ensure our residents and visitors have an abundance of space to relax, play, exercise and reconnect with their natural surroundings.”

The Council's original "transformation plan" for this area was that the park would be at the centre of low-rise family homes, with a primary school beside it.

Despite that being adopted planning policy, the Council allowed it to be brushed aside when Quintain came up with their own 2015/16 Masterplan, which will see three sides of northern park surrounded by blocks more than 20 storeys high (the highest currently planned to be 34 storeys).

The Council's news release also quotes Quintain's Head of Masterplanning, saying: "The past year and a half has shown, clearer than ever, how important it is that we all have access to natural and wide-open green spaces.”

I agree entirely with that statement, but whether Union Park will actually provide 'natural and wide-open green spaces' is another matter!