Solidarity with Pete Firmin trapped in a Kafkaesque Labour nightmare 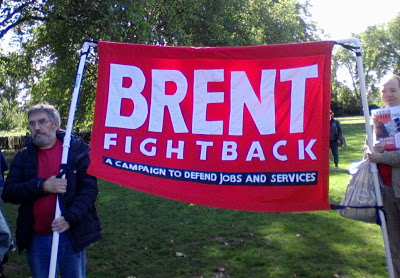 Readers of Wembley Matters will be familiar with the name Pete Firmin. Pete has written many guest posts for Wembley Matters, mainly focusing on issues on the South Kilburn Estate where he is active on housing and tenancy issues. His last post was only yesterday on problems over getting help regarding the flooding in the Kilburn area.

Pete has been suspended from the Labour Party for some months, although you would think he is just the sort of committed socialist and grassroots activist that the Labour Party should welcome with open arms.

This letter has just been published by the Kilburn Times LINK explaining the background to his suspension by the Labour Party and the Kafkaesque situation that Pete finds himself in. Putting aside political differences (I am a Green Party member) I would like to express solidarity with Pete and Bridget in their predicament.

When will the Labour Party Leadership’s purge of Left wing Labour members end?

It is now almost eight months since Pete Firmin (the chair) and Bridget Dunne (the vice-chair) of Hampstead and Kilburn Constituency Labour Party (CLP) were suspended from the Party.

Pete and Bridget have been given no opportunity to explain or defend themselves.

Pete Firmin was suspended from the Labour Party with Bridget Dunne, eight months ago - in taking disciplinary action against two Party members - action that has never been explained legally or made public - the Labour hierarchy have obviously acted against the principles of natural justice. Their decision was secretive, manifestly sectarian and profoundly undemocratic.

Using such draconian methods against individuals who were only carrying out the wishes of the Constituency has damaged not only the morale and fabric of the local Party but Labour’s case for fairness.

In all the years I have been a member of Labour (including eight years as a Kilburn ward councillor) I have never known the Party to be so authoritarian and undemocratic. Pete and Bridget are dedicated socialists and trade unionists with over 40 years’ service to the Labour Party between them. These are the very people our party needs if we are to defeat Boris Johnson’s ruthless Tory government. But we won’t defeat them by being every bit as dictatorial.

Over 30 members of Hampstead CLP recently submitted a statement to our MP, Tulip Siddiq asking her to support Pete and Bridget’s immediate reinstatement. I urge Tulip to stand by Pete and Bridget. Sir Keir Starmer should start fighting the Tory government and not Labour party members. He should also restore the Labour whip to Jeremy Corbyn.

If Starmer's party has no room for socialists its not the Labour Party!!!


Whatever the politics of this situation, there has plainly been a transgression by the central office, of generally accepted principles of corporate/ committee governance.

It is unfortunate that Pete and Brigit are paying the price for what is, at best, the incompetence of the overpaid apparatchiks operating at the Labour party's cental office.