FLOOD EMERGENCY: Brent Council fails in its duty to residents 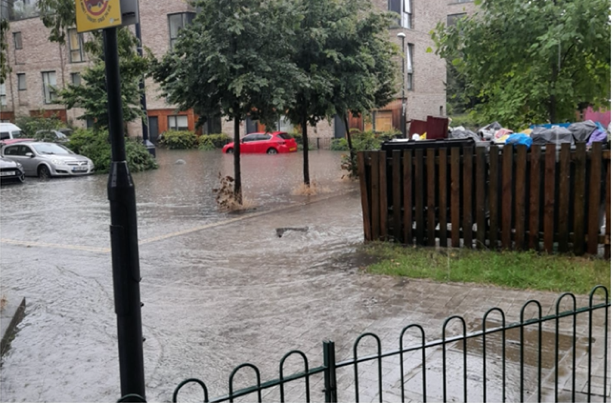 Yesterday, across North and North West London we had thunderstorms and torrential rain. And the torrential is no exaggeration.

Areas which don't normally experience flooding got flooded. I'm not claiming any special case for the part of South Kilburn where I live, I know that other areas of Brent (and elsewhere) had it worse. But I want to use the opportunity to show the poor response of those who are supposed to react speedily to such events. 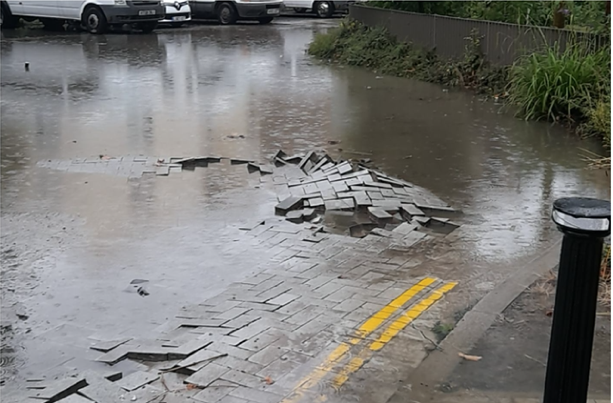 Here, water was gushing out of several manholes, so forcefully that it pushed bricks out of the roadway. While some of the kids enjoyed themselves paddling (and even sitting in) the water, many ground floor residents were concerned that the rising levels of water risked entering their flats (and it did in some cases).

So, who do you turn to in this situation? 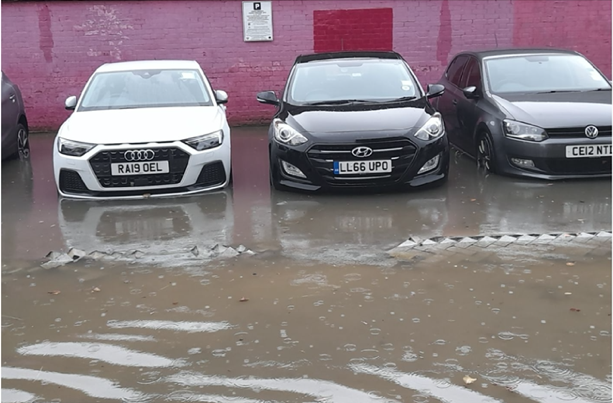 Thames Water's website says "problems with flooded roads should be reported to your local council." Not much point in trying them then.

Fire Brigade? When I (and others) eventually get through we're told that the London Fire Brigade is overwhelmed with flooding issues and - understandably - they can only come to you if someone is in danger. Luckily, that wasn't the case, but it doesn't help much either.

Kilburn Park tube station was closed due to flooding (as were other stations on the Bakerloo line), but those attending there were London Transport emergency vehicles and staff, so not able to assist us (and probably had their hands full anyway).

Brent Council website said nothing about flooding emergences (it still doesn't), so I text one of our Councillors, telling her briefly of the situation and asking who we should contact. She says to try Brent's out of hours line, which I do. When I eventually speak to someone, I'm told that their emergency out of hours only deals with emergency household repairs, nothing else. Clearly the many other "out of hours" emergencies that can arise are of no concern to Brent. They suggest I contact Thames Water. Pointing out that their advice is to contact the local Council makes no impression.

"If a flood happens, all councils as ‘category one responders’ must have plans in place not only to respond to flooding emergencies, but also to control or reduce the impact of a flooding emergency."

Remember when we criticise the government for not having plans in place to deal with the pandemic, despite having carried out an exercise years ago to test readiness? Well, it seems Brent is equally ignoring its duty.

And this document contains much about the authorities responsibilities after the immediate crisis is over. We'll see. 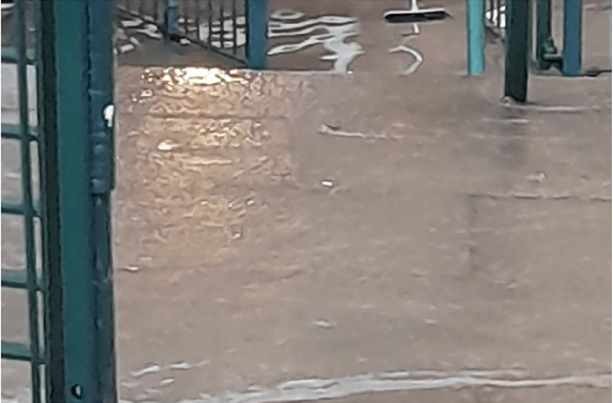 Residents were left to their own devices, clearing blocked drains with brooms, garden forks and even umbrellas. Eventually much of the water recedes, helped by the rain easing off (though not stopping). Some of the problems are clearly caused by the fact that when grass and shrubs are cut back, most of the cuttings are then left to rot. With rain like yesterday's that means they're swept into the drains.

Eventually, after 2230 some of us got a message that we would get a proper response if we rang Brent's out of hours line. It had been taken over by the "emergency response team". Many hours after that should have been speedily done. 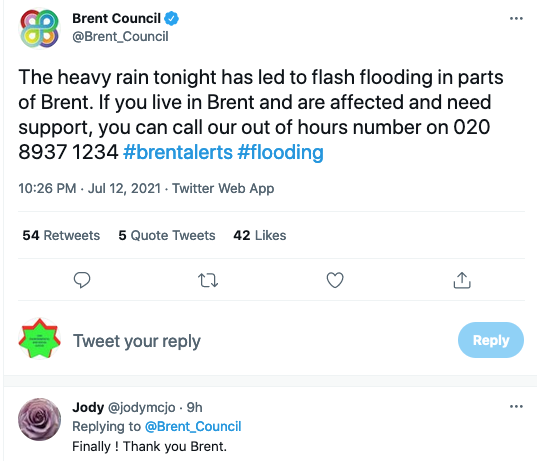 The flooding caused an additional major problem - as noted above, the water gushing out of some of the drains had caused bricks in the road to rise. It meant that some cars were unable to get out of their parking spaces, and two roads had bricks strewn over them (see photos). The roads looked both dangerous for vehicles which drove over them and who knows what further damage might be caused to the road. Several people got on to several services, including Brent, to say something needed to be done, possibly closing roads until proper action could be taken. Eventually a team - presumably from the Council - did come and take a look, but did nothing and didn't block the road to traffic. 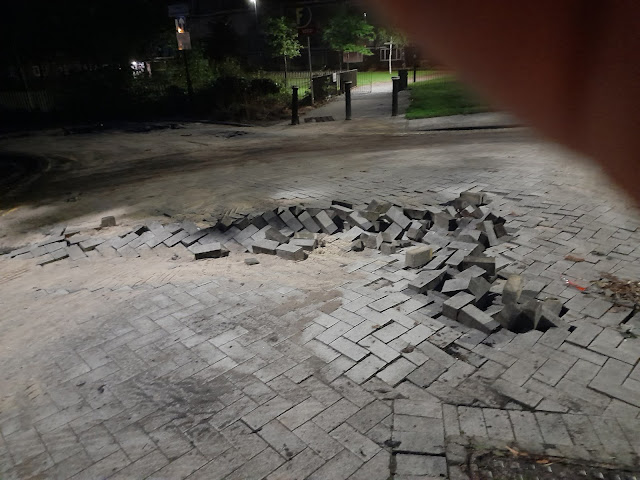 Even from our small part of the borough, there must be lessons drawn by the Council. Scrutiny might like to look, for instance, at how well Brent dealt with the situation. Not just the immediate crisis, but its aftermath. And once again, Brent made no attempt to contact our Tenants and Residents Association. Surely they should be a source of information, both about the extent of the problem and what needs to be done.

Luckily, my part of Kingsbury did not get the torrential rain experienced by Pete and his neighbours in South Kilburn yesterday, but when I first moved to the borough in the 1980s, we did experience flash flooding problems.

After heavy rain we and our neighbours, with our homes on a downhill slope, had water overflowing from the road and running in through our airbricks and through our garage before flowing as a river down our back garden!

With help from a local councillor, a storm drain was put into the roadway outside. When that just acted as a fountain for water coming up from the sewer during further heavy rain, Thames Water had to install a new and larger surface water sewer, to replace the original 1930s one which had become inadequate for the run-off during torrential downpours.

As more, and denser, housing developments are built, in Brent and elsewhere, the old water infrastructure is finding it difficult to cope.

To give one example, this is a brief extract from the Consultee Comments by Thames Water on the 1 Morland Gardens planning application last year:

'Following initial investigations, Thames Water has identified an inability of the existing SURFACE WATER infrastructure to accommodate the needs of this development proposal. Thames Water have contacted the developer in an attempt to agree a position for surface water networks but have been unable to do so in the time available and as such Thames Water request that the
following condition be added to any planning permission.'

The "developer" they had yet to agree matters with was Brent Council itself (acting through a planning agent)! They did get the condition they had asked for included in the planning consent:

'34 The development shall not be occupied unless confirmation in writing has been submitted to and approved in writing by the Local Planning Authority, in consultation with Thames Water, that either
1) all surface water network upgrades required to accommodate the additional flows from the development have been completed; or
2) a housing and infrastructure phasing plan has been agreed with Thames Water to allow additional properties to be occupied.

How closely this condition is enforced on Brent Council by Brent Council remains to be seen. In a guest blog last month* I revealed that a Freedom of Information Act response had disclosed that Brent had "forgotten" to make the necessary appropriations of land and stopping-up order which are legally required before this same 1 Morland Gardens development can go ahead! Yet they were about to award the contract for the work. It doesn't give you much confidence in the Council!

Many people have complained about the lack of infrastructure to correspond with the massive developments going on across the Borough. Labour Councillors responses have been appalling, untrue, restricted to mentioning non-existent open spaces and doctors surgeries. The current water and sewage system was laid down by the Victorians...of course it can't cope with the increased number of dwellings. I've recently spoken with Water company reps working in Barham and King Edward's Park, and they both said the same thing. No matter what they do, the underground pipes (infrastructure)are unable to cope. This, along with the very recent Wembley Stadium debacle....exemplify the same thing...bad planning, over building, and lack of infrastructure . Mo Butt and his cronies chickens are coming home to roost.