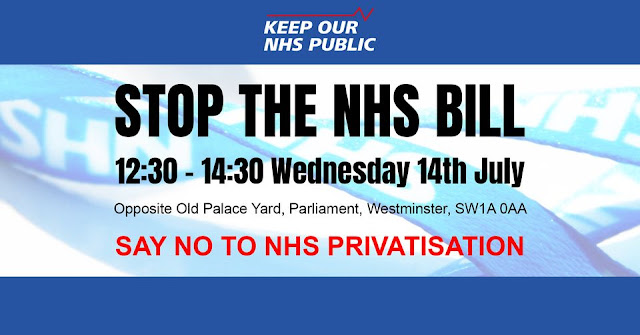 Statement from Keep Our NHS Public

The Health and Care Bill will be launched this week, as Prime Minister Johnson overrules his new Health Secretary and Covid cases soar. KONP calls for widespread public opposition to the Bill, and for MPs and Lords to vote against it at every opportunity. The Bill will break the national NHS into 42 separate “Integrated Care Systems” (ICS), each with its own tight budget forcing cuts in care. Local NHS provision will be tied to a plan written by the ICS Board, open to the private sector, dragging local authorities into a financial project without real democratic accountability or public control.

The Bill will be promoted as an end to privatisation. It is the opposite, a transition to an unregulated market in healthcare. The Government is responsible for delaying lockdowns in March 2020 and before Christmas, untested discharges to spread infection into care homes, key workers dying without adequate PPE, failure to stop the Delta variant when it first appeared, exhausted and demoralised healthcare staff and150,000 deaths.

Despite this appalling list of errors, it claims the Bill is based on its record of pandemic management and points the way forward for the NHS as a whole. In practice this will mean unbridled collaboration with the private sector, openly celebrated by Matt Hancock before his fall, and certain to be endorsed by former banker and Chancellor, now Health Secretary Sajid Javid, and by the Prime Minister’s NHS advisors including the former CEO of Operose, the UK branch of US health insurance giant Centene, Samantha Jones. Already, some 200 firms, at least 30 of them US-owned and prominent in the health insurance market, are accredited to support the development and ongoing management of ICSs. They include Operose (which now controls dozens of GP surgeries and community services), Optum (owned by the largest US health insurance firm UnitedHealth), IBM, and Palantir.

As money drains from healthcare to shareholders, what will it mean for patients, and for NHS staff whose wellbeing is essential if they are to provide effective care?

●more digital services, creating a two-tier health service, depending on whether you’re able to make use of computers or smart phones

●growing expectation that patients will ‘self-care’, using phone apps or websites for advice or information

●more risk that services will be cut or rationed, and non-urgent referrals to hospital delayed or refused because of pressure on ICSs to make savings

●faster discharge from hospital, with family carers expected to take on more unpaid care due to lack of community services

●threat to national agreements on pay, terms and conditions as each ICS Board will have their own limited budget and seek to cut costs ●flexible working, with staff redeployed across and even beyond the ICS area, undermining team working, union organisation, continuity of care, and bad for the environment with increased travel

●deregulation, as nursing and other jobs are advertised to candidates without the right qualifications

●deregulation, as the Secretary of State will have the power to remove jobs from regulation -supposedly justified by new technology but actually risking harm to patients and interfering with professional judgement and staff development.

For democratic accountability and Local Authorities

●exempting the NHS from the Public Contract Regulations 2015 will remove the right to reject bids on the grounds of non-compliance with environmental, social, or labour laws (ILO conventions guaranteeing Freedom of Association and the Right to Strike), and on the basis of a bidder’s track record.

During the pandemic, the government dished out over 3000 covid contracts, many of them without tendering, some to companies whose only qualification was being mates with a Minister.

That is the Brave New World the government plans for the NHS as a whole. The threats to staff should ring alarm bells for every trade union with members in the NHS, and the threats to patients should concern us all. Let’s stop this Bill now.