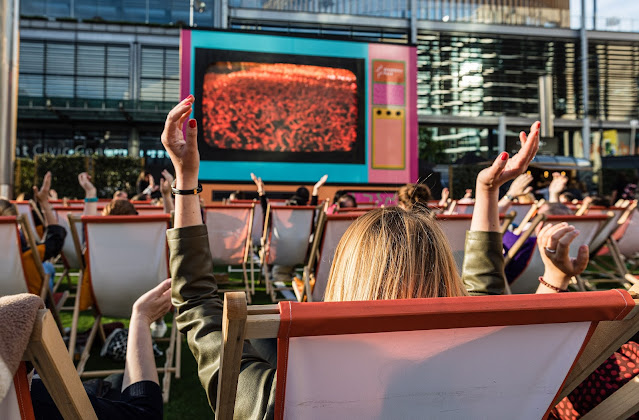 Wembley Park's response to my query re Covid19 precautions at these events:

All events, as part of the Summer of Play programme, are set within a spacious, outdoor setting and some measures will remain in the public realm for the public to use whenever they want to.

From Thursday 29 July, Wembley Park’s popularfree outdoor cinema, Summer on Screen, will return for five weeks in the Events Pad, across from the London Designer Outlet, on Wembley Park Boulevard.

Visit Summer on Screen for an exceptional outdoor cinematic experience of hand-picked films under the summer night sky, with a choice of socially distant deckchairs or beanbags for a comfortable experience.

Choose from 18 cinema gems including cult classics, magical musicals, and family favourites. Guests can see smash hits like the acclaimed play Hamilton, or for those in the sporting spirit, Bend it Like Beckham will show on the launch night of July 29, when the Olympics fever will be in full swing.

An array of Bollywood classics will also be shown, including Manmarziyaan as well as educational and popular documentaries from National Geographic which will be screened in the day.

Best of all, screenings are completely free, so be sure to arrive early for pre-show entertainment, food, drink, and to secure seats.

Film Schedule (with more dates to be confirmed in due course):