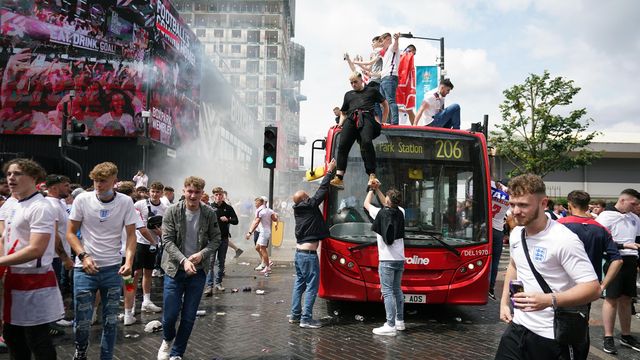 Newspaper commentary has focused on many  aspects of last Sunday's disturbances at the Euro2020 Final at Wembley Stadium, including how the new high density developments around the stadium may have contributed by funnelling  the crowd into a narrow space. The Independent today has a comprehensive special report that every Brent councillor should read as well as senior officers and those responsible on the day.

I asked Brent Council Press Office on Monday for a statement. Today  I was told that someone was working on it. Even a statement of sympathy for those injured or otherwise affected would have at least been an acknowledgement of the seriousnes  of what had happened - but nothing has been heard up to the time of the publication of this artcile.

The full independent article can be read HERE - I will publish just three extracts below which I think will be of interest, but do try and read the whole article. Comments welcome.

Several sources have told The Independent that the local council and the FA do not want strong numbers of the force around as “it’s bad for optics”.

Tim Roberts, who has lived across from Wembley for 16 years and was involved in the building of it, says the priority has been “ensuring the value of the area for retail and residential investment”.

He says that Quintain, the development and asset management team behind Wembley Park, wields massive power in the area.

“The local council, Quintain and the FA have an uncomfortably close relationship, which means there is no scrutiny. We are yet to have a comment from anyone political in Brent after what we saw on Sunday, which is shocking.

“It’s as though nothing happened when we were very lucky that there wasn’t a loss of life. All the blame has been placed on the fans, but they are not solely responsible. The management of the stadium and the area around it has been appalling. Whenever issues are pointed out, it’s brushed under the carpet.

“I have spent the last few days removing far-right insignia and even acknowledging there is a large element of that accompanying England and games here just goes ignored. It’s about pretending everything is great, Wembley is great, Wembley Park is great.”

Three employees from Wise Security, which provided stewards for the final, have approached The Independent to criticise the lack of preparation they received and care after a harrowing experience.

None of them are over 22. They have spoken anonymously to prevent being blacklisted for future jobs and confirmed that there had been fake stewards inside Wembley, that some accepted bribes because “the pay is a joke”, that there was no detailed plan of anything that could go wrong on the day or how to handle it, and that even after suffering both racist and physical abuse by ticketless fans, there’s “been more PR than caring about what we’ve just been through and asking if we need help.”

One of them, a young Asian male born in the south of England who was stationed in a stand that became overrun with ticketless fans, was racially abused. “I was told, ‘Go back to Pakistan. Don’t tell us where we can go in our own country, this is our stadium. All lives matter, but not P*** lives.’”

He says he was in fear of his own safety, but more worried that “a lot of people could die here, right in front of me”.

While the unacceptable actions of ticketless fans was deplorable and central to the dangerous scenes on Sunday, there was also a “serious failure of security and stewarding,” according to a safety officer of a Premier League club. Accountability must follow.

He was “completely staggered” by what he saw unfold at the stadium. He reached out to The Independent, but asked for his identity to be protected. His account of events tallies with a stream of testimonies from several different stakeholders.

“I can categorically tell you that the majority of stewards I directly came across or watched on Sunday had no training for the role. I would put money on it that a lot of them have never worked a big football match before, or any kind of match. They were young, out of their depth, and the ones who innocently turned up to do what must seem a fun job are also victims of what happened.

“Who was the stadium safety officer? What was the plan and protocol? Was every steward clued up on the layout and what to do in case of any and all emergency situations?

“What I saw on Sunday is a product of what we’ve seen for a long time in my line of work: cost-cutting and loss of quality control. There are very few solid, reputable security companies. Most will hit the number of stewards by any means necessary, which includes not bothering whether they have an NVQ or not.”

From the Leader of Brent Council, Muhammed Butt's  Register of Interests on the Council website 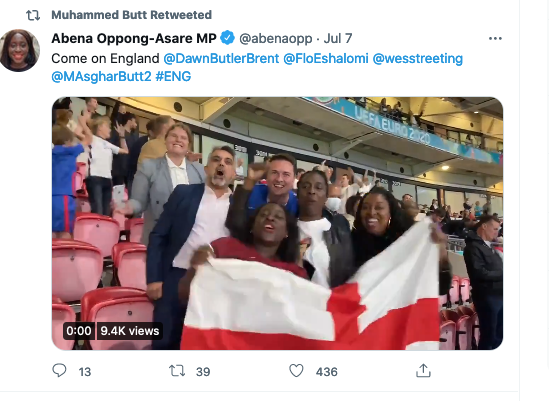 What is pertinent to this enquiry is are they asking the right questions?
At big events like this UEFA pay to hire the Stadium, effectively taking full responsibility for hosting the event and that it entails, i.e security, hospitality etc. So let's ask the questions....

How much did UEFA pay? What was the cost? Was it adequate?
How much was spent? and on what on? i.e In house Security and the Police etc.
Who carried out the Risk Assessments?
What was identified as of major concern?

If anything answers will show clearly why this was such a fiasco.

Over development of the site by Quintain only added to it. The lack of space was obvious for the amount of people kettled in to such a small area.

When Wembley Stadium hosted the Olympics in 2012, the Army was brought in to Police all the barriers etc as to mitigate a Terror attack. Perhaps we should be employing them at major events such as this, as I am sure they would make a much better job of it.

Glad to see Cllr Butt and Dawn Butler enjoying themselves - no masks or social distancing between them all.

Why weren't these free tickets offered in a raffle for residents who live in the Wembley Stadium Event Day parking area?

For the record, Brent Council does appear to have issued a statement last Monday, from Chief Executive Carolyn Downs, about the tournament as a whole and the final:-
https://www.brent.gov.uk/council-news/july-2021/statement-from-carolyn-downs-chief-executive-of-brent-council/

It did mention the trouble at and around the final on Sunday, condemning the actions of 'a minority of drunk and mindless hooligans', and says:

'We will be working with our partners at the FA, with the Police and other partners within the Safety Advisory Group to determine what contributed to the appalling scenes we witnessed yesterday and what can be done by any and all of us to improve the management of future major events in Wembley.'

I hope that Brent Council and its "partners" will look honestly at what went wrong, being ready to admit mistakes, and not trying to shift blame onto others where there are things they could and should have done better.

I have said before, over various planning matters and the Bobby Moore Bridge tile murals, that Brent Council's relationship with Quintain appears to be "too cosy". The lack of space (and lack of toilet facilities - even the block which did exist near the start of Olympic Way was allowed to be turned into the Black Sheep cafe, in which Quintain has an interest) certainly contributed to Sunday's awful scenes.

Even though the free tickets to Euros matches were from the GLA (who either got them from UEFA, the FA or Wembley Stadium), it is quite common for the Leader and other key councillors to get free event tickets direct from the FA and/or Wembley Stadium. I suppose that is "normal", but it does make it more difficult for the Council to look at matters objectively.

Even though the free tickets to Euros matches were from the GLA (who either got them from UEFA, the FA or Wembley Stadium), it is quite common for the Leader and other key councillors to get free event tickets direct from the FA and/or Wembley Stadium. I suppose that is "normal", but it does make it more difficult for the Council to look at matters objectively.
Is it normal? why? they earn enough money to pay for a ticket if they want one just like the rest of us!

Why should they get free event tickets? To me that is the thin edge of the wedge of corruption. If there are free tickets then offer them to our NHS workers, to disabled people, local heros, or raffle them for a good cause! To give them to Mohammed Butt and Dawn Butler is just disgusting, and they should have had the good grace to refuse them, or donate them.