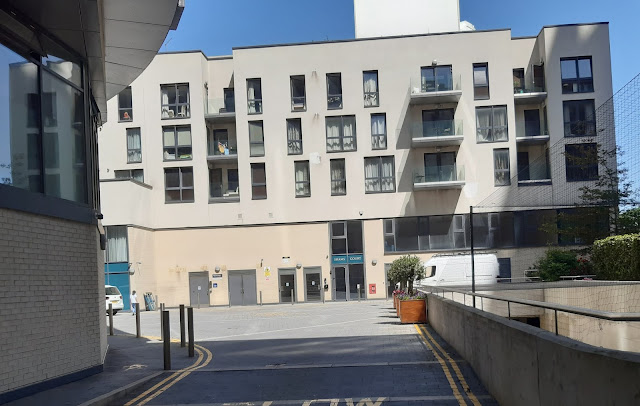 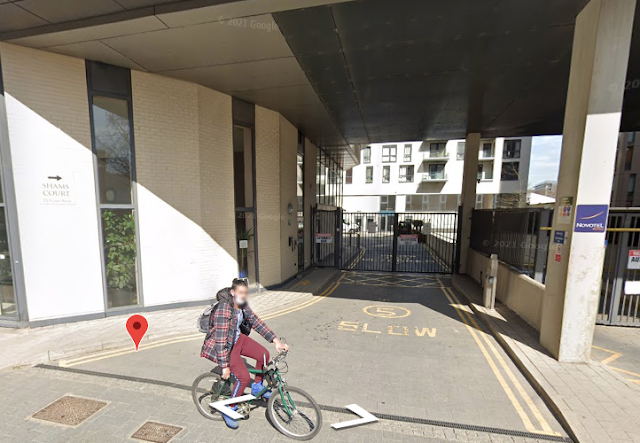 A four storey block of flats, Shams Court is tucked away between Olympic Way, North End Road and Fulton Road. Gradually it has been encircled by high rise buildings and now more are on their way. 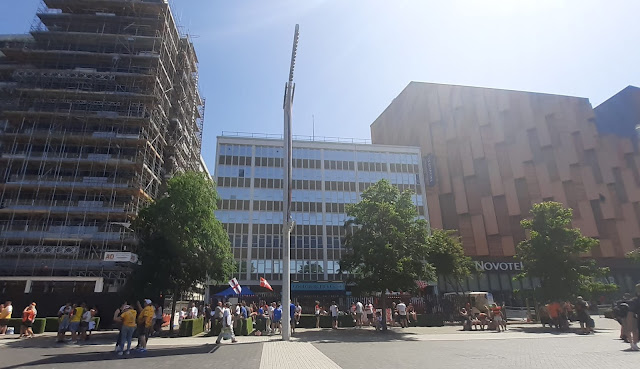 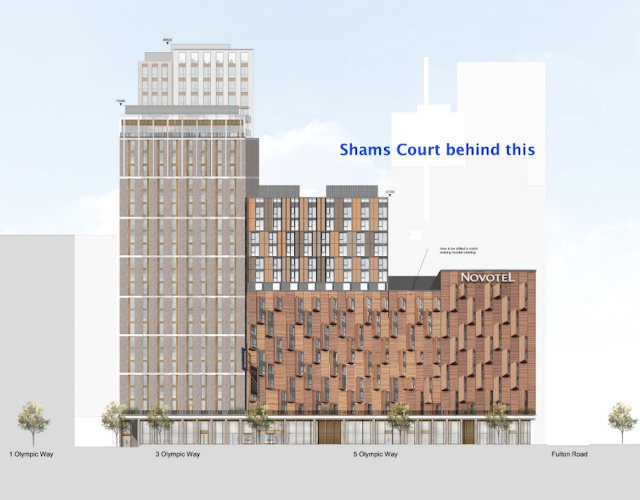 This is the description of the plans on the Brent Council Planning Portal:

Only 22 comments are recorded on the portal and as usual Brent Council hasn't published the Consultee comments for the public to see.  All 22 comments from Shams Court, Danes Court and MacLaren Court object to the development. A resident from Shams Court claims that they only found out about the proposals by accident and were thus able to inform the other 8 flats, despite the developer admitting that Shams Court is the building most affected by the plans.

This is typical of the comments:

This planning application will have a serious, detrimental impact on the health and well-being of the homeowners of the 9 flats at Shams Court, a 4 storey block.


Shams Court flats were sold in 2014 and were a part of the development holding Pinnacle Tower flats, the Novotel Hotel and other affordable housing flats. Since then we've had non-stop construction works and high rise buildings built around us, namely the Scape Wembley (29 storeys) and Felda House (17 storeys) which tower over Shams Court (to the East of Shams Court).


The development of these towers next to Pinnacle Tower (18 Storey tower to the South of Shams Court) and the Novotel (19 storeys to the West of Shams Court) left us with very little natural light and a claustrophobic environment to live in. We are overlooked in our flats and on our roof garden, leaving us with little privacy. Noise levels, anti-social behaviour, disturbance and nuisance from overcrowding of a small area with thousands of people greatly depreciated our quality of life since we first bought our new homes at Shams Court.


To grant the application of a 25 storey block immediately at the back of Shams Court (to the South) would be shameful. We are already overcrowded and overlooked. We would be left with no natural light from every single direction and be subjected to enduring increased noise pollution, disturbance, loss of privacy and anti-social behaviour.


It is without doubt that the new norm for the majority of working professionals would be to spend most, if not all, of their time working from home, without access to offices. These proposal will be detrimental to our health and well-being as Shams Court will be the place we reside for the vast majority of our days.


I must also stress that Shams Court was sold as a means of affordable housing (shared ownership). To have yet another massive building towering over us will severely lower the value of our homes, trapping the residents of Shams Court in negative equity, within homes they cannot sell due to the poor quality environment that's been created by non-stop construction of high rise structures around us.


We put faith in Brent Council to understand the detrimental effect this proposal will have on the residents of Shams Court. We hope you will protect us from these deleterious proposals. The idea of a small 4-storey block being immediately towered over by high rise buildings on every side (in very close proximity) is ludicrous. Yet this is what is being proposed.


I would urge you to visit Shams Court, or view a satellite map of the existing towers surrounding us to see the detrimental impact that this proposal would have on Shams Court residents.


When the original development was built in 2014, it's assumed the developers were granted the permission to build our development, under a section 106 agreement. The grant of which would have relied heavily on the provision of affordable housing. They are now intending to subject the same residents of their affordable housing to awful living conditions, ruining our prospects and well-being by building yet another tower on top of us. This is nothing short of cruel and deceitful behaviour.


Within the documentation provided on this portal, I can say that there are false claims of consultation between the developers and residents. There's a mention of ongoing communication with residents Dec 2020, Jan 2021 and Feb 2021. This has simply not happened and these proposals have only recently come to our attention.


The Daylight Assessment document also fails to include Shams Court on various parts of the document, for example the '2 hours of sunlight before and after' impact assessment. I believe the developers are purposefully misleading Brent Council on the impact that these structures will have on Shams Court.


For the sake our physical and mental health I sincerely hope that these plans are refused.

I am a key worker who was born, lived and worked in Brent and that's why I was able to buy within our block. We really enjoy living here and generally feel that the development in the area is for the good. However, when plans will (admitted by the developer) have a detrimental effect on our living standards (and therefore our health), it is unfair that we and our baby twins (and our lovely neighbours) are either being forced to live in a terrible environment (during building but more importantly, after) or being forced out from our homes.


The developer is the same company that owns the Novotel and the Pinnacle Tower. They, in fact, built our flats as part of the then planning agreement to have part of the requirements to have a certain proportion of the development available for keyworkers - but they themselves are now pushing us out by making living conditions uninhabitable, or proposing and writing plans that will have that effect.

Given what happened last Sunday at Euro202 it is important that planning officers consider the impact of another high density development of Olympic (Wembley) Way on security and crowd control.

The plans have wider repercussions regarding the protections that are supposed to be in place for protected views of Wembley Stadium and what has been described as the claustrophobic, canyon like, approach to the stadium along Olympic Way. 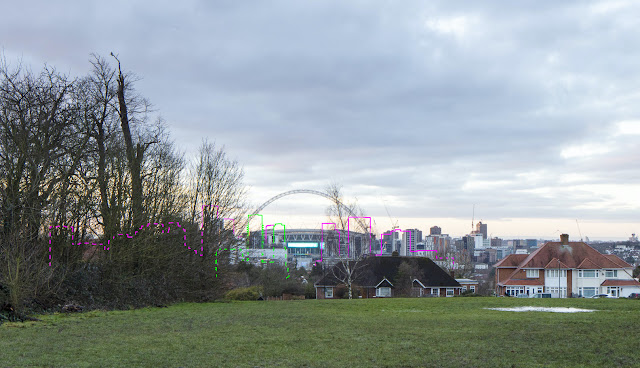 The 'protected' cumulative view from Barn Hill. The 3 Olympic Way towers are in green outline and those in the pipeline in pink - including plans for the Wembley Stadium Retail Park and Fountain Studios site. 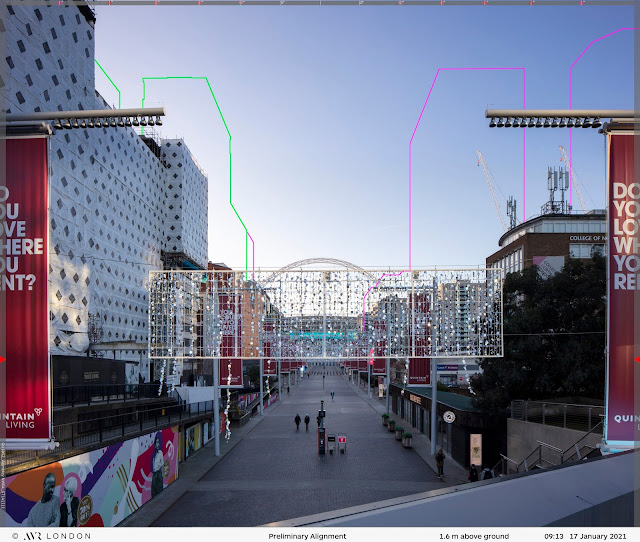 The view along Olympic Way with the green and pink outlines of the proposal and those that have preliminary agreement. 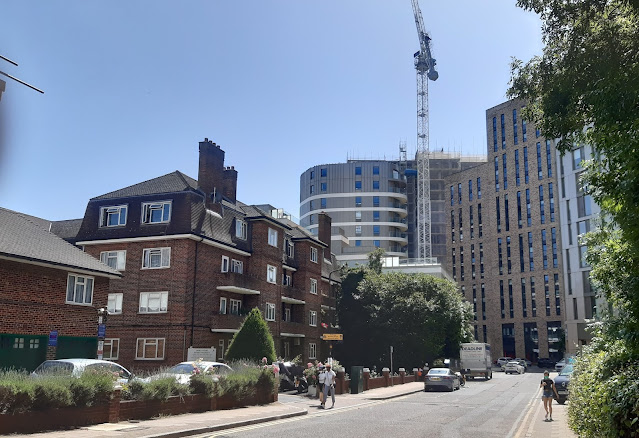 Danes Court in North End Road (now opened up to through traffic) the proposed development will be on the right.

The documents submitted in support of this planning application (21/2130) include a "Daylight, Sunlight and Overshadowing Assessment" prepared by specialist firm WSP.

Quite apart from the effect on existing buildings, such as Shams Court, even the daylight and sunlight for the new residential buildings they are proposing falls way below acceptable standard.

The proposals include a tall block (25 storeys) of private residential flats, and a shorter tower, at the back of the site to provide the "affordable" homes.

This is what the assessment concludes for them:-

8.1.2. The results of the Affordable Housing Building showed that out of 39 Living spaces, only 3 (10%) achieved the recommended PSH and WPSH values, while the remaining 36 (90%) did not.'

But you could go outside to get your sunlight, and the vitamin D you need for healthy living, couldn't you? After all, new developments are required to provide amenity space.

This is what the report says about its assessment on overshadowing of the amenity space for the residential buildings:

'The results showed that the majority of the assessed spaces in lower levels do not meet the BRE criteria, since they do not receive 2 hours or more of sunlight on at least 50% of its area on 21st March.'

But this section of the report did provide a positive conclusion (although it rather states the obvious!):

'The analysis showed that all these amenity areas receive greater levels of sunlight during the peak of the summertime.'

I strongly disagree with the proposed plans for yet another high rise tower. Danes And Empire Courts have long since been off the thought process for developers and Brent Council only interested in the "cash cow" our basic requirement to natural light and sunlight is our right. Already following the building and redevelopment of high rise blocks on North End Road, our quality of life has reduced considerably. A further development of this size will be catastrophic on the area. STOP THE PLAN NOW!!!