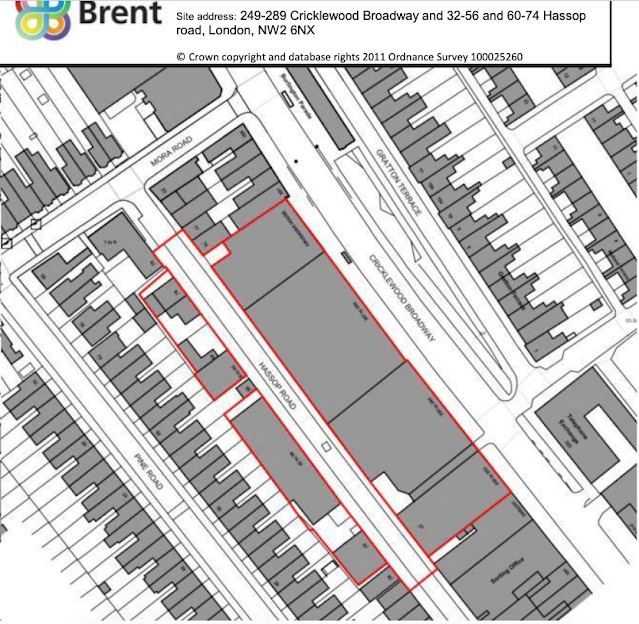 A major development on Cricklewood Broadway and Hassop Road appears to have slipped under the radar of local residents. The application LINK will be decided at tonight's Planning Committee. 448 letters were sent out by Brent Council and there were only four responses. One in favour and three objections. Opposite the site, actual in the London Brough of Barnet, is the Railway Terraces Conservation Area. Barnet is listed as a consultee but, along with all the other consultees, their submission is not published on the Brent Planning portal.

The two existing floors of the Cricklewood Broadway building will be re-furbished, with the ground floor retained in retail use and the first floor converted to shared living/co-working accommodation. The building will be extended upwards by three additional floors, each providing additional co-living accommodation. An arcade will be provided, linking Cricklewood Broadway to Hassop Road, and will have shops on its southern side, and some ancillary accommodation for the co-living units (gym and concierge) on its northern side. The units are laid out at a ratio of just under 7 rooms per shared kitchen, dining and living room and small kitchenettes are also provided within the rooms. Other communal facilities will include co-working spaces, lounges, gym, cinema, external amenity space, managers office, concierge, and storage areas. Floors three to four will be stepped back from its front and rear elevations and the maximum height of this building will be approximately 17m at its southern end and 20m at its northern end.

The Hassop Road building will involve the refurbishment of Nos.42-56 and its upward extension by an additional floor, and the redevelopment of 32-40 and 60-74 Hassop Road to provide a three-storey building. Due to the gradient of the road, maximum height will range between approximately 9m and 12m.The ground floor will continue to be in employment use whilst the upper floors will accommodate 8no. self-contained flats.

Public realm improvements between the two buildings are proposed to make the street more pedestrian-friendly. This will be achieved through the provision of a shared surface, the planting of trees (approximately 23no.), the removal of the ad hoc parking and their replacement with two dedicated parking bays and two loading bays, and cycle parking. Catenary lighting is also proposed. Improvements are also proposed along the Cricklewood Broadway frontage with additional plantings, seating, and cycle parking. 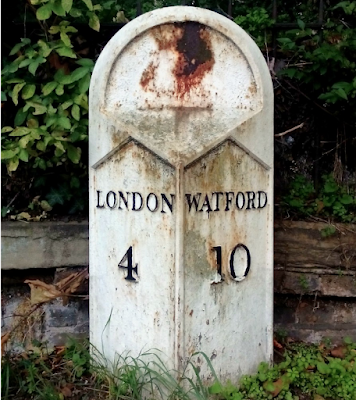 Regarding the Railway Terraces Conservation Area they say:

Although the proposed development will be visible from the Conservation Area and will directly face the listed Milestone LINK , it must also be viewed within the context of the existing developments external to those heritage assets.

Visibility does not necessarily equate to being harmful because it could be argued that views from the Conservation Area, such as along Kara Way, towards the site will be enhanced due to a replacement building, albeit larger, that is more sympathetic in terms of its overall design and materials. At worse, the impact of the development is considered neutral.

On the 157 unit co-living block the planners state:

PolicyH16 of the London Plan acknowledges that co-living is a type of housing that will help to meet a particular need, that is, single person households who cannot or choose to not live-in self-contained homes or HMOs. The policy does not restrict the accommodation to particular groups by occupation or specific need (e.g., for students, nurses, temporary/emergency accommodation) but such schemes must be of at least 50 units.

Given the density of living accommodation in that block and the fact that it has lifts for disabled people who will require PEEPs (personal emergency evacuation plans) councillors will be keen to look at fire safety. I have embedded the report below - it is worth looking at page 9.

This development did not slip under the radar of the Railway Terraces!! We try hard to keep our radar fully operational at all times.

Information and links to Brent's planning portal and how to comment were circulated on two separate occasions to all residents in the terraces by the terraces' residents' association secretary. They were also informed about the Zoom meeting organised by Ziser that outlined the plans and development, and a number of residents attended this.

Overall the view was that the development was acceptable in the light of all the other developments taking place in Cricklewood and, unlike Montreaux, the would-be developer of the B & Q site, no tower blocks were being planned.

Plus surely it can’t be a bad thing if it gets rid of all of the dodgy garages on Hassop Road and the ones that use the near by streets as their personal work bays for battered and broken down cars!!