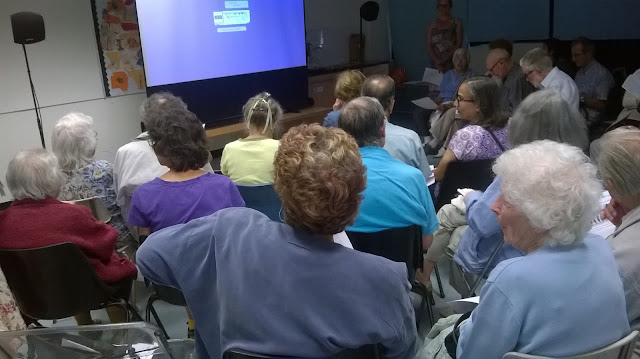 Preston Community Library Hub was crowded this afternoon for a showing of 'London: A Bigger Pictures Comes to Brent'.

London: A Bigger Picture is a three year project from the London Screen Archives that is digitising archive film, often family moves, of life in outer London. It captures ordinary daily life as well as special events.

Today's screening included a 'Healthy Baby' contest filmed during the 1920 miners' strike, Sports Day at Willesden grammar and a School trip to Paris in 1936-7, Coranation Celebrations in 1953 and came right up to date with the 1993 Festival of Brent at the old Brent Town Hall.  We saw breathtaking footage of the first cup final at Wembley when huge crowds swept into the stadium and over the pitch. This was the famous 'White Horse' event, when police horses were used to calm the crowds and now commemorated in the Whit Horse Bridge near Wembley Stadium station.

When Kingsbury Open Air Swimming Baths (Roe Green) was shown there were murmers of recognition and appreciation from the audience. The colour footage showed a crowded baths and despite one mutter that 'it was very cold' there was general agreement when someone said, 'if only we had that now'. None of the audience could confirm my memory that Dobbin, the Express Dairy cart horse, had bolted one day in the 50s and ended up in the pool: 'It's your imagination, Martin' , 'It's an urban myth.'  Can anyone help?

Coincidentally tonight's Planning Committee has an item on Brwnt's historical heritage. There is a proposal that seeks to provide a consistent and transparent approach to the identification and protection of the Borough’s Locally Listed Buildings The process would involve consultation with residents about which buildings and sites should be listed. These are the suggested criteria LINK :

Any site or structure provided it is not already statutory listed and meets the designation criteria, can be added to the Local List, particularly if it can be shown that it contributes to the character of an area and is valued by local people. The following are the criteria for including buildings, structures or features on the Local List:

a) an example of a style of building that is particular to the local area, or a good surviving example of a historic architectural style;


b) designed by notable local, or national architects, engineers or designers; or


c)  an example of a particular technical innovation in building type, material or technique.

.        d)  associated with an important historic figure, local or national;


.        e)  have strong community or socio-economic development significance, such as  schools, institutions or any important part of Brent’s industrial and military  history; or


f) is associated with any important local historic events.

.        g)  building groups, structures or features, including groups or terraces of buildings, which help form an attractive local character;


.        i)  notable buildings or structures, on important routes into the area, or key  landmark buildings which create a vista or contribute to the skyline.

Unfortunately some uncertainty has emerged over the Preston Library and Community Hub as the building, which until recently housed some overflow classes from Preston Park Primary School, has been earmarked again by Brent Council. although some joint use is envisaged..

A report going before the Cabinet on Monday states LINK :

This building was originally used as an annexe by Preston Park Primary whilst the new permanent school building was completed. That use is no longer required however the former Preston Road Library is proposed to accommodate 60 reception places to compensate for the loss of 2 Reception classes from the delay to the proposed expansion at Byron Court Primary School. Cabinet is requested to approve an extension until the end of the 2016/17 academic year. Further, Cabinet is requested to delegate authority to the Operational Director of Property and Projects to enter into a licence with an identified school until 31 July 2017.

It is noted that at the time of drafting this report, a licence to occupy the building exists granting the Friends of Preston Road Library use of the building for the operation of a pop up community library. This expires on 31 July 2015. Proposed future school use will take account of the local aspiration for this community library to continue in some way.

This property is currently included in the Council’s Capital Disposals programme for 2016/17 and forecast capital receipts arising from disposal are assumed to fund the Capital Programme for that year. Approval of the proposal to extend use until July 2017 will impact on the completion of a disposal and receipt of an associated capital receipt will be delayed until 2017/18.

The 'London: A Bigger Picture' project can be found HERE

To volunteer, donate film or find out more contact screenheritage@filmlondon.org.uk

Preston Community Library's cinema was funded with around £4000 of Ward Working funds from Brent, for which we're very grateful. Unfortunately we will probably only be able to open at weekends after mid-August, and the longer term future remains extremely uncertain. I'd urge people to visit while they still can, and to tell Brent that Preston Road needs its library. And its community cinema.
Philip Bromberg

The film shown today was a fascinating glimpse into our local past. Thank you for everyone who organised the event.

I would welcome "a proposal that seeks to provide a consistent and transparent approach to the identification and protection of the Borough’s Locally Listed Buildings" if it were to include preservation of historically significant names.

All too often, significant names are lost when some redevelopment is unveiled. An example is Charles Goddard who was the first public health doctor in the area over a hundred years ago and was instrumental in setting up Wembley Hospital, amongst other things, Poor Dr Goddard has been replaced by some sort of tree house, Beech, Willow or some such.