Things did not bode well at first last night when the public found that the Scrutiny Committee was not listed on the Civic Centre event screens, but eventually they found that the meeting was indeed on and a few were in the public gallery. Transparency was not improved when yet another delegation by Philip Grant was refused on officer advice. I hope to publish more on that from Philip later.

There were two main items on the agenda: a performance report from Brent Housing Properties (BHP), Brent Council's 'arms length' council housing provider, and the Committee's plans for future work.

Dan Filson opened with a couple of rebukes concerning an inadequately anonymised case study in the BHP report and bureaucratic language that seemed to ignore the actual people who were BHP tenants and leaseholders. Today the report has been removed from the Council website.

Recent government proposals formed the backdrop to many of the concerns and a stumbling block was that social housing providers had yet to receive any detail on how some of the proposals would be implemented.

The budget proposal for a 1% annual social housing rent reduction over a four year period starting in 2016 LINK was a concern because it would amount to a reduction in rent receipts of £10m by the end of the period. For comparison the BHP's repairs expenditure is about £2m per year.  it would also affect the income of housing associations ansd their ability to build new homes adding to the problems caused by the right to buy proposals.

There was a range of potential impacts from benefit changes as well as the proposal that high value properties should be sold off. Lead member for Regeneration, Cllr Margaret McLennan suggested that the latter would affect Council proposals for building larger 4-5 bedroomed houses for the borough's high number of larger families. It was unclear exactly how the high value social homes would be  identified, regionally or by borough. If the latter there were homes in particular areas of the borough that would be affected and could amount to one third of the total.

The higher rents to be imposed for tenants with a joint household income of more than £40,000 was discussed as well as the problem of the removal of benefits from young people.

The Committee were keen to assess the effectiveness of consultation and tenant involvement as well as engagement with young people. There were detailed questions on the makeup of the BHP Board and representation of tenants and leaseholders.

Dan Filson was bitingly critical of the BHP's performance in filling 'voids', getting new tenants into empty properties, remarking that in some boroughs such figures would lead to dismissals. He reminded BHP that every delay resulted in the Council paying for people in temporary bed and breakfast accommodation. The turnaround time for 'major voids' was 79.3 days against a target of 61 and for 'standard voids'  55.7 against 24.

The Committee questioned in some detail the data on complaints: 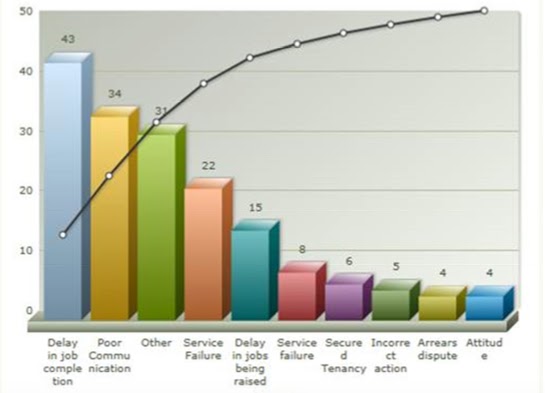 It was unfortunate that with 'job completion' the main issue there was no discussion of the performance of the BHP's contractors such as Wates for major projects and Veolia for grounds maintenance.

The BHP were given a number of requests for further information by the Committee and Dan Filson asked for a paper clearly setting out the issues for the Committee, the Council and the public.

Just to clarify the point in Martin's opening paragraph about another Deputation from me being refused at Scrutiny Committee:-

There were two reasons why I was not able to present my Deputation (concerns over possible "pay off" to Cara Davani). The first, which I accepted at the meeting, is that the item was not on the agenda. I had been in touch with two committee members, asking for their help by making a request under Standing Order 64 for the matter to be raised under "any other urgent business", and had hoped that at least one of them would have done so. It turned out that neither had (one of them had sent apologies for absence, as she was unwell).

The second reason, which Cllr. Filson explained, was that he had been sent a copy of an email to me from Tom Cattermole (Head of Executive and Member Services) at 3.30pm on the day of the meeting which said that my proposed Deputation subject could not be allowed, as it would breach the Data Protection Act 1998.

As soon as I saw this email at 4.45pm I sent an email to Mr Cattermole and Fiona Alderman (Chief Legal Officer), with copy to Cllr. Filson, asking for an immediate reply giving details of which provision(s) in the Data Protection Act they were referring to. I have still not received that information from them. In the circumstances, at the meeting itself, with no legal officer present and no further advice, Cllr. Filson said that he would (reluctantly) have to accept that it would have been inappropriate to allow me to present my Deputation, if I had not already been prevented from doing so by the item not being on the agenda.

I hope that this makes clear that it was Council Officers who were seeking to stop me from presenting my Deputation, and not Cllr. Filson. I will be writing more about this later.

BHP has fundamental structural problems which have got far worse over the past few years. Under Gerry Doherty - an old fashioned council officer - they saw themselves as public servants, and the call centre staff behaved accordingly. Then, Gerry left. New brooms came in, and swept away most of the "old" staff and bought in new ones with an all too commercial attitude at times. The excellent Major Works manager didn't get the job he should, so he left. Someone wsa brought in whose background was in landlord liaison, with no technical background in the sector whatsoever.

I have been fighting cases where repairs were not done, badly done or left incomplete for YEARS. That's not neccessarily down to the sub contractors - they do as they're told by BHP. I can cite roofs leaking for over three years, burst pipes repeatedly reported and left undone and a heck of a lot more. Long term tenants have been left in misery - I know of at least one taking legal action for dilapidation.

When Major Works have been planned, BHP send estimates for bills of several thousand pouinds for estates negelected for decades. That's bad enough, but when leaseholders get the final bill, it's double. These are not exactly rich people, to say the least.

And then, there's what can only be described as bullying tactics by the supposed property development people, trying to force residents to accept totally unacceptable plans. When challenged, one senior manager accused leaseholders of "profiteering" from their own homes. (!)

Wates aren't being used for all Major Works by any means - they are, however, now managing Repairs, but as I said, that service is only as good as how BHP manage it. On grounds maintenance, at the moment, Veolia are still sub contracting to Wettons. The local Wettons people do a very good job indeed on the estates I know, but tha's despite BHP, not because of them. The Wettons people tend to have worked on the estates for decades and are very involved with the community.


The voids thing doesn't surprise me. I and others have reported empty properties and also those being sub let. Nothing happens.

Unfortunately one of the houses pictured above has had substantial damage after the contractors failed to cover the roofing works which were in progress. The result was significant flooding after overnight rain, carpet ruined and electrical circuits and equipment damaged, and of course the stench that always comes with such events. Not good.

Ouch - not good at all. Which contractor was it? And I wonder why BHP weren't checking properly, given they add on a project management fee!

Ah, now I see why the Wates mention in the post. The contractors I've come across have mostly been Lakehouse and Niblock.

I may be being particularly dim - not exactly a first - but can't see how the headline relates to the report. Reading the article I fail to see where BHP were "scorched". The odd mild rebuke, possibly, but I took scorched as meaning rather more than that.

Filson for Leader, Butt please step aside. We keep giving contracts to people who behave like they are doing the council a favour, they need to start earning their money,

Anyone for Leader, but Butt.....Brent is fragmenting under his watch

Maybe Martin will use the "Owen Jones defence" ie, "I don't write the headlines"

So does Butt (need to start earning his money)

I take full responsibilty for everything (except the situation in Greece!) Filson's delivery was sharp and telling BHP, in effect, that there should be sackings over the voids issue, was quite a scorcher. Maybe you had to be there...

You joke, but most Labour councillors would welcome a new leader if someone credible stepped forward...