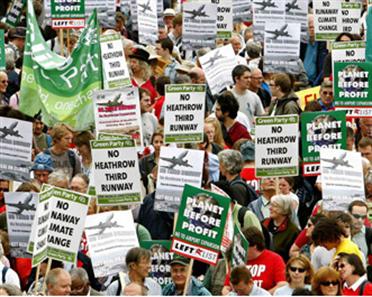 'Today’s announcement shows the power and reach of big business. Growth at any cost in our aviation capacity is not compatible with the UK's climate change commitments. Heathrow Airport is already the biggest noise polluter in Europe and with estimates that around 1.1 million people will be affected by a third runway, this is a deeply disappointing decision.’

In 2014 Jean Lambert  submitted a joint response to a major Government consultation on airport expansion. In it, she highlighted the impact of aviation on meeting our climate change targets and on local communities. She also submitted a response to a separate consultation on state aid for aviation, in which they called for an end to state subsidies to the aviation industry

“Despite three long years of the Commission looking at all the evidence, we still cannot build a third runway at Heathrow otherwise we will fail to meet our climate change targets.

It is and has always been a myth that the UK faces an airport capacity crisis and we already fly more than any other country.

Instead of expanding our airports the Government should introduce a frequent  flyer tax which would tax aviation much more fairly and at the same time  reduce the demand for new runways".