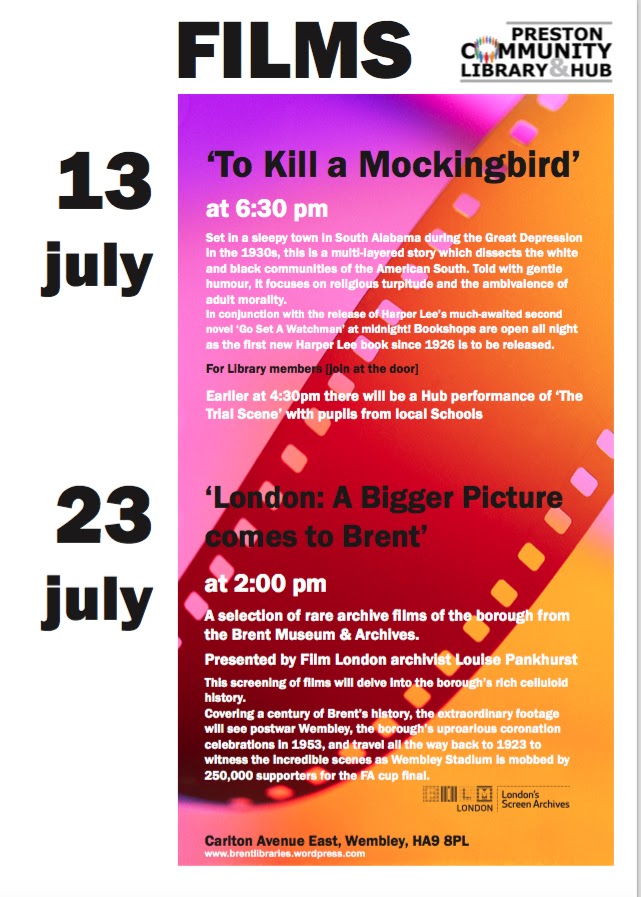 From Preston Comminity Library
Come and watch our films and events on Monday 13th July and Thursday 23rd July - Details and times are all on the attached poster.
To Kill a Mocking Bird
First, at 4.30 pm on Monday 13th, we are going to enact the trial scene from Harper Lee's famous book - come and join in [be part of the Jury!].  Later on at 6.30pm library members can watch a screening of the iconic drama.  [Set in a sleepy South Alabama town during the Great Depression in the 1930s, this is a multi-layered story that dissects the white and black communities of the deep South.  Told with gentle humour, it focuses on religious turpitude and the ambivalence of adult morality.  [Note, if you haven't joined up to the library yet, you can join at the door - it takes 2 minutes]
This event is timetable to coincide with the release of Harper Lee's new novel, 'Go Set a Watchman'.
London: A Bigger Picture - Brent Archives on Film
Screening at 2 pm on 23rd July, this will show a selection of rare archive films of the borough from the Brent Museum and Archives, and will delve into the borough's rich celluloid history.   Covering a century of Brent's history, the extraordinary footage will see post war Wembley, the borough's uproarious coronation celebrations in 1953, and travel all the way back to 1923 to witness the incredible scenes as Wembley Stadium is mobbed by 250,000 supporters for the FA Cup Final.
London: A Bigger Picture is a major Film London project aiming to get Londoners enjoying the city’s archive film while building a wider picture of London life.
This event will see an expert from London's Screen Archives showing films from your area, exploring their history and explaining how you can donate your home movies to preserve them for future generations.
London: A Bigger Picture will run for three years across 15 boroughs and is funded by the Heritage Lottery Fund.
www.filmlondon.org.uk Ι @Film_London
Historic Photos
We hope to have some historic photos of Brent provided by SKPPRA, our local residents association.  These will be on display in the library to  coincide with the 'London: a Bigger Picture' event.
We will have refreshments for sale.  The events are free, but donations to the work of the Preston Community Library and Hub will be graciously accepted.
See you there!
Preston Community Library & Hub
Posted by Martin Francis at 11:01:00

It seems Preston Library are being pooped on by Brent Council and promises being reneged on. :(

I understand that Preston Park Primary no longer needs the old library space for classes following completion of their building, but now it is needed by Wembley High for their primary classes as the building work on their site is behind schedule. Wembley High is of course now a converted academy outside Brent Council control but presumably the Council sees providing the space as part of their broader overall responsibility to provide education for all Brent children. The new primary in the Quintain development near Olympic Way is going to be another Ark school.