Following rapidly on the news that Brent Council had withdrawn the music licence for the South Kilburn Festival  at 5pm on Friday - no explanation yet, came this message from the Canterbury Works campaign:

Dear friend,
We write to you today with some bad news.  We are aware that some of you already know, however for those that do not it is with great disappointment that we have to tell you that the scheduled campaign event on Saturday will not be going ahead.
We had planned to have a stall at the South Kilburn Trust Community Festival, however after discussions with South Kilburn Trust they have decided it is inappropriate for us to be in attendance for the two following reasons:
1.       The event is a family fun day and this is what their park licence request is for and, in their view, our stall does not sit within that remit
2.       The Trust wants to ensure that the residents are presented with the facts, and the pros and cons of the different options and do not feel it is appropriate for us to be there to say our side without, we would presume, Brent Council being there to say their side
Some of you have already been in touch to express your outrage and anger but we must respect the decision of South Kilburn Trust. We had already got the balloons and t-shirts ready for the stall and we will put them to good use!  Watch this space regarding our big community event in September.
Thank you,
Anna
Canterbury Works Campaign Team

One residents' leader commented: 'Titanic battle between property developers and SK Trust, with residents caught in the crossfire'

Meanwhile the fall-out from the Council's decision to revoke the music licence rumbled on via Twitter during the day: 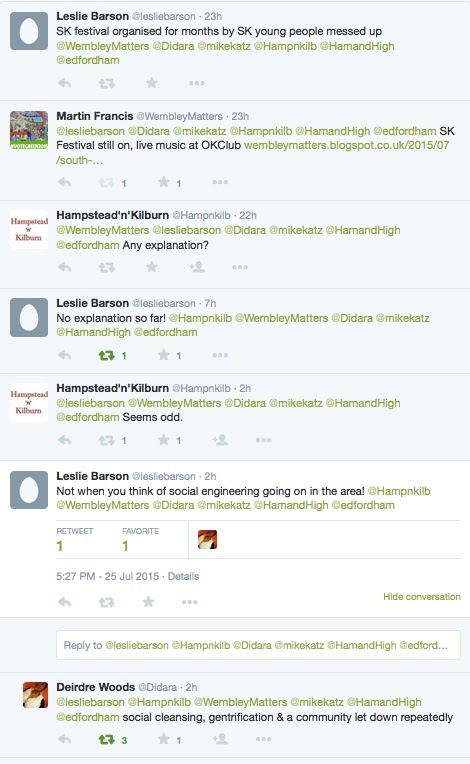 The live music had been moved to the OK Club and this plaintive plea was tweeted this afternoon: 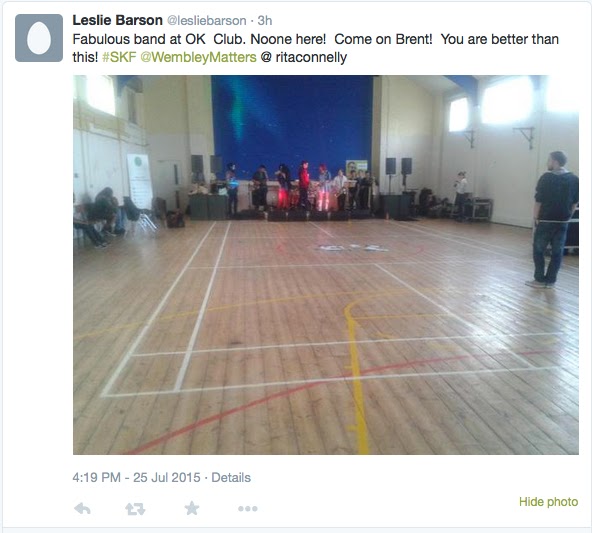 Perhaps things will become clearer on Monday when the South Kilburn Trust and Brent Council explain what exactly was going on.
Posted by Martin Francis at 19:46:00

The Council did not refuse, revoke or withdraw the licence for the event. The organisers failed to apply for a licence within statutory timescales.

That sounds authoritative but is not what South Kilburn Trust told me when I rang them yesterday evening. Could you say who you are?

South Kilburn Trust are a sham, they pose as a community organisation but they are a completely unrepresentative group funded by developers and in the pockets of the council.

Yes, it really would help if everyone gave their names.

I have been on the receiving end of it myself, when Brent Council officers have used it to stop me from speaking at Brent's Scrutiny Committee, to publicly raise issues over the misconduct of Council Officers so that councillors could openly discuss and question what has been going on.

The word 'inappropriate' does have a real and valid meaning, but in my experience it is being used too often to stop discussion of matters which should be dealt with openly and transparently. I believe that its use as a justification for censorship is INAPPROPRIATE.

'Inappropriate' usually means 'anything we don't like'.
Though in this case, to be fair, they give their reasons. These seem to be:
1. WE'LL decide what constitutes 'family fun', sunshine.
2. No facts or opinions on any matters can be expressed without a representative of differing or opposing viewpoints being present for 'balance'. So Brent Council can obstruct the free expression of a viewpoint simply by refusing to put anyone up to give the opposing Council line.
'Ignorance is Strength, comrades!' And opacity is transparency.

Aren't South Kilburn Trust funded by the section 106 money that goes to the council from developers (in South Kilburn's case this would be Wilmot Dixon)? S106 money is supposed to be used for community infrastructure and to offset the impacts of development, not to fund well paid jobs in a "trust" that doesn't allow community voices.

Aren't they just what's left of the NDC? Also hasn't section 106 been replaced by CIL?