Making South Kilburn disappear from the maps (and political consciousness?)

Guest blog by Sonya Bell who describes herself as a local resident with concerns as to how London is becoming one big privatised city.


I have lived in Brent nearly all of my life and have watched all the changes that have come and gone. I became aware of some changes a few years ago when Stonebridge Park (located between Harlesden and Wembley) became Wembley Park and some of Stonebridge has become Neasden and Harlesden. Stonebridge did have a reputation years ago but it seems instead of making it a better place to live, it seems the "powers that be" just decided to call some parts Harlesden, Wembley and Neasden.

I have noticed the same thing now happening in South Kilburn. Since the new flats have been erected, according to google maps Chichester Road in South Kilburn is now known as North Maida Vale: 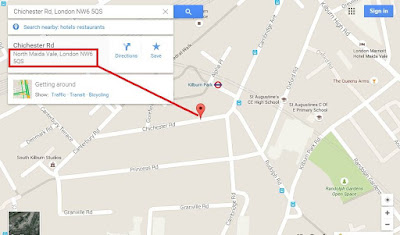 In addition to this, I received a letter from HS2 about work that is to commence when the new rail line is built and they gave reference to a road called Queens Park Road. I contacted HS2 and asked where this road was, I was informed by a representative for HS2 that Queens Park Road covers the bridge at Queens Park Train Station and extends right the way around South Kilburn on to Cathedral Walk up to Kilburn High Road. I did explain that the road was already called Cathedral Walk, however the woman said that I was incorrect and it is now known as Queens Park Road.

I think South Kilburn is gradually being phased out by the private sellers who want to make extra money from selling property in "Maida Vale" rather than South Kilburn. I do wonder if the people of Maida Vale and Queens Park know that their lovely and prestigious areas are being extended to take in South Kilburn. I am sure that the leaseholders are very happy with this district change but I wonder how this will affect the people in social housing who will not be able to afford to buy a property once it has a Maida Vale or Queens Park price tag on it. I also wonder if the property developers that have purchased large areas of land from Brent council for this "regeneration" work paid at South Kilburn rates or Maida Vale rates.
Posted by Martin Francis at 17:55:00

On the Stonebridge Park point, I would have thought Wembley Park is a clearly different area, as Tokyington lies between.

However, I agree that the name 'Kilburn' has tended to get phased out over time by estate agents. At the opposite edge of it, what has become called West Hampstead used to be Kilburn.

Good guest blog. Nice light irony but very telling points.
What exactly these people find 'unhelpful' about locations like Kilburn ('Irish'?) and why 'Neasden' should be deemed a positive (Private Eye? Twiggy? 'Tight-lipped Ron Knee') would make an interesting study.

I agree David. I grew up in Harlesden and had many friends in stonebridge. Everybody who lived in or around Stonebridge knew the field at the back of the coach and horses pub and where the buses used to pull in was always called Stonebridge park. I have just found a old picture that shows the stonebridge park hotel as being in Willesden. Brentfield Road was always Stonbridge but is now part of Neasden. I think it would be a shame if we lost these boroughs with the history they hold.
Sonya Bell

I suppose this started when the tube station west of Willesden Green was christened "Dollis Hill", though I was glad the bid to rename Kilburn station "Mapesbury" seems forgotten. I had to pull English heritage's Images of England project up over them labelling the Jubilee Clock as being in Wembley!
Presumably that was a genuine mistake made by someone in their office not knowing the area. But I was not sure about a BBC news broadcast some years back in which they clearly depicted Sidmouth Court flats by Willesden while telling us the police had raided "a block of flats in Kilburn". I thought this was their way of letting thicker viewers know that the targets of the raid were Irish. Or maybe it was the police description.
I never thought the West Hampstead description of the area going up West End Lane to Fortune Green (now there's a name...) was inaccurate, the people and pubs seemed different, and back in the days when Kilburn (west of the High Road) was in the borough of Willesden, the other side of the road was in Hampstead. Though if anyone describes it right by the High Road as "West Hampstead" that would be silly.
Coming back to Kilburn, and the bit where the actual burn flows underground, calling it Maida Vale is estate agents 'avin a larf, surely, and had me mystified when that pub was destroyed trying to remember where it was. Because when I lived down there fifty years ago, the area between Kilburn Park and West Kilburn and down to the north Paddington boundary was definitely south Kilburn or Carlton. I used to go around collecting people's subs for Carlton ward Labour Party.
And going further back, I seem to remember the bit over the road towards Priory Road was Kilburn Priory. What's more, the area around St.Augustine's was and is known as Kilburn, even though I think it crosses the boundary into what used to be Paddington, and is now Westminster. I think it was the setting of a novel called 'A Kilburn Tale', very respectable. Whereas Maida Vale at one time had quite a raffish reputation, even the posh bits were supposed to be where wealthy Victorian gents paid for flats for their mistresses and former fancy pieces.

I have just looked on TFL to see about travel for tomorrow and have been inform by them that Chichester Road is firmly North Maida Vale. The pub that was crushed was the Carlton Inn and it is now in Westminster next to Paddington Recreation ground. I have always been told that Kilburn High Road is 2 halves, one side is Kilburn (the side with Mcdonald's) and the side that had woolworths on it is Camden. Does anybody know who is responsible for giving this information to Google and tfl.

Charlie's local knowledge is always welcome on WM. He is on Facebook at https://www.facebook.com/charlie.pottins?fref=ts

There was an amusing mini twitter.com storm last year when the Love and Liqour nightclub (which is a few yards from Kilburn High Road station) described itself as being in Maida Vale rather than in Kilburn. No doubt this was so as not to scare off its Made in Chelsea clientele but as someone pointed out at the time - the address of the club is Kilburn High Road, the nearest train station is Kilburn High Road, the nearest tube station is Kilburn Park, it's just in front of Kilburn Priory and the council ward it's in is called Kilburn - just what bit of Maida Vale could this be?!

The Carlton pub definitely comes under the borough of Westminster although it's still within the South Kilburn area. Just shows how ward and borough boundaries bear little relationship to how people identify with and relate to an area.

Suggestions as to what Ian Dury would have called Kilburn and the High Roads if he was forming the band in 2015?

West Hampstead and the Maida Vales?

Google maps now claim North Maida Vale extends up the Kilburn High RD to Priory Park Rd. May I suggest that anyone concerned about the airbrushing of Kilburn of the map compline to Google. Click on the send feedback at the bottom of Google map page.

I wrote:
Dear Google My post code NW6 7ET is identified on your map as being in a place called North Maida Vale. I live next door to Kilburn Sports centre and 3 min from Kilburn High RD. We call this place Kilburn. Please update your map to reflect the reality of the residents who live here and not the fantasy of Estate Agents!